I’m really going to miss Dark Sky. It’s been my go-to weather app for a long time. The interface is perfect for me. The iOS 16 Weather app is fine, I guess, but it’s just a little harder for me to use than Dark Sky.
I’ve also tried WeatherBug, which can give you a lot of useful info, but the interface isn’t great.
And I’ve tried Hello Weather, and may go back and give that another try soon.

image1170×2532 146 KB
This information density of Weatherstrip can’t be beat. As a bicyclist, I am concerned about wind speed and direction, cloud cover, UV, humidity, sunrise/sunset, as well as temp and precipitation. Weatherstrip gives you all of this as an hourly forecast that you can side-scroll through for up to a week.
1 Like
dianed143 (Diane D) September 25, 2022, 1:03pm #64

This is really interesting. I did download it but the wind can’t be depicted on that image unless you scroll I think?

I feel like us cyclists have a set of requirements that many others don’t! My most important one is wind, especially as we head into winter.

Now that I’m a recreational cyclist I’m interested in the same things, Diane.

But when I rode to work here in Boston I pretty much ignored all of them, except when snow, snow melt and freezing temperatures iced up the bike paths. When that began I took the winter off, usually until mid-March.

That didn’t mean I didn’t try to avoid getting wet, at least until I’d warmed up a bit, and the only thing that reliably showed me how was the animated weather radar I pulled up on my desk PC just before I went out the door. No app, no matter how “localized” can do that, and we shouldn’t expect them to.

In the settings for Weather Strip, you have to change the windsocks to arrows.

Accuweather has what they call “Minute Cast”, which is essentially a graphic version of local radar. (That I usually call them “Inaccuweather” is an indication of how reliable I find it.) There’s a ConnectIQ widget for both Garmin Edges and Garmin watches produced by Accuweather that can show you the Minute Cast on your device, provide you have some connection to the Internet via your phone. There’s also a ConnectIQ field called “Rain & Wind” that I use which shows you sort of real time temperature and relative wind (takes into account your direction of motion relative to the wind) which seems to update the wind vector and temperature every 20 minutes or so (again through your phone). Several times this year Accuweather has said “No precipitation for the next 120 minutes” only to have that prove very wrong.

As I type, Minute Cast thinks it’s raining in my area code. It probably is, somewhere. At the same time Wunderground’s radar feed accurately shows, in real time, the small dry lobe over my house.

I use Windy. It’s pretty exhaustive. I sometimes find I have to check it against Sailflow, which gives me more detailed wind info I need when on the water. Weather doesn’t seem to say anything about moon behavior, and I need that for photography. I also use a Tide app for detailed info about local waters and TPE for precise info about sun/moon behavior. I haven’t used the apple Map since my first iPhone, use Google, and TPE, zooming in on Windy gives me a map as well. Windy also gives me tide info with a handy little graphic on the map which links to tide tables. Its 7-10 day weather plays with a tap of the arrow and I can watch Ian approach Englewood, FL as the weather vid moves the wind.

I will have to check out Windy. I downloaded Carrot and Weather Strip, and last night found Motorcycle Weather.

Motorcycle Weather only shows one day at a time for details in the free version but it’s pretty much what I wanted for wind. I can see a summary in a list for a week at a glance. i.e. tomorrow says 0% chance of ran with 7mph winds. If I click on it I get the hour by hour also with wind direction. It’s a really simple chart but easy to read at a glance.

Between Carrot and Weather Strip, Carrot is kind of winning with the wind display.

I have a tides app too, I use it to check to make sure one of my routes isn’t under water in the spring.

I will wait until I upgrade to iOS 16 before making a monetary commitment.

so far haven’t found anything to toggle that’ll make it hyperlocal or even vaguely close. it does have my location so that’s a win …

Already in iOS 15 I noticed that if you zoom in on those precipitation forecasts their time range becomes very limited. And if I want a 12-hr forecast, I need to zoom to a level that exceeds all of CA.

I was hoping that would improve in iOS 16 weather considering all that DarkSky knowhow Apple bought.

Already in iOS 15 I noticed that if you zoom in on those precipitation forecasts their time range becomes very limited.

Do you mean ios16? Yes, I noticed that there was something wrong with the precipitation forecasts that day (it was limited to only the current day), but it seems to be fine for me now.

No. 15.7 at the moment. The issue of short forecast timespan when looking at a more limited geographical area has certainly been observed here since 15.0 though.

I feel like the Apple Weather app in iOS 16 is missing the “Percentage chance of precipitation” by hour that the Dark Sky one has. […] But in Weather now, it shows you a graph representing amount of rain at a particular hour and you can swipe around to see it go from 0" to .05" to .25" etc.

The use of ‘percentage chance of precipitation’ was one of the reasons I could never use Dark Sky for anything more than the next hour precipitation graph. Like @haver I use Yr.no as it’s the most accurate in Scotland, but I also really like the way it displays predicted quantity of precipitation (similar to what Apple’s Weather app is now doing). I always find percentage a bit useless for precipitation because I don’t understand what I’m supposed to take away from it:

Dark Sky’s ‘next hour’ graph is brilliant at showing the quantity of precipitation. And a list of mm rain per hour tells me a lot more than a list of percentages per hour in terms of how I should dress to be outside.

I say all this not because anyone is ‘wrong’ to want the percentages, but to give a perspective that might help in using the precipitation quantity display. And also in case anyone can enlighten me on what the percentages actually mean!

There is an official answer to this.

Another description that’s been given by the meteorologists on TV here is that they take the percentage confidence that there will be precipitation of at least 0.01” in the region at all (say, 50%) during that hour (and it’s at some point that hour, not the full hour) and the chance it will be in that exact location if it does precipitate (say, 80%) and multiply them to get the chance for that area (so, 40% chance of at least 0.01” during the time period they are making a prediction for).

Dark Sky’s ‘next hour’ graph is brilliant at showing the quantity of precipitation. And a list of mm rain per hour tells me a lot more than a list of percentages per hour in terms of how I should dress to be outside.

The stock weather app does the same thing really, just in a different sort of graph. Here’s what the app says for my location for tomorrow. 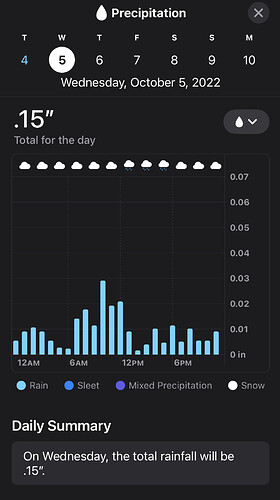 At the bottom it tells me that it’s expecting 0.15” for the full day, with graphs above showing me that it’s going to be no more that 0.03” for any hour (and I can look at the X axis for the time and the y axis for the amount for that hour, and the bars show the relative amount. But honestly the X axis is poorly designed - which hour is which exactly? Hard to say.)

Here’s Dark Sky for the same day. (Ive tapped on precip rate in inches/hr). Not quite the same, but pretty close. (To me telling me that you think that it will rain 0.15” or 0.4” for a full day is basically telling me the same thing - it’s going to be very light rain.) 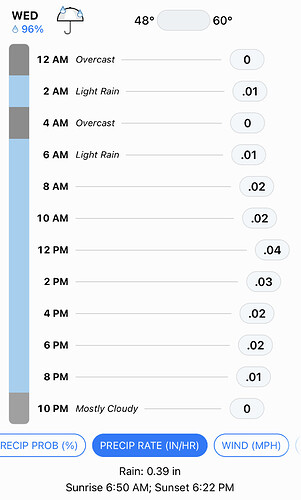 I do think that Dark Sky was pretty well designed to pack a lot of information into one screen.

Rain probability doesn’t mean any of those necessarily…but then it never has. It’s just a general guide between 0% and 100% for whatever area it’s being forecast for, which in Dark Sky’s case is your individual location. I’ve never figured out exactly how it figures out the probability at my house as opposed to a mile down the road, but I have checked here and then when I was a mile down the road and it’s not identical so there’s some sort of localization thing going on. Wikipedia says that rain probability is the likelihood of > 0.01 inches will fall in a single spot averaged over the entire forecast area…and with the size of Dark Sky’s forecast area unknown it’s really just a crapshoot…which is why I think of it as a general guide sort of thing.

As a recovering engineer…I’ve always found the nebulous nature of rain probability only somewhat useful.

It’s fascinating to read this thread, and the see obvious interest expressed in the various nuances of weather reporting. It makes me wonder, though, about accuracy. Do people find the increasingly granular predictions of precipitation and wind actually reliable and useful? My curiosity/ignorance is I’m sure fueled by the fact that I live in Southern California, where all we’ve really needed was the blanket forecast issued by the one-hit-wonder Albert Hammond in 1972.

I’ve found that down here in SW FL you can be just a few miles apart and have different weather. I can’t count the number of times that the weather guessers forecast winds and torrential rain from SW (that’s the prevailing wind direction here) and we get a bit of wind and no rain while 3 or 4 miles north and south it rains heavily. Something about the way the coastline or islands or whatever affects the flow I guess…but you can clearly see it on the radar and Dark Sky has always been pretty good at it.

Apple’s Weather app doesn’t even agree with itself.

If you look at the bar graph screen it shows rain all afternoon until 6:00 PM when it shows none.

So, what do you believe? The bar graph or the graphics screen?