I have Apple’s Weather forecast, but I liked the way Dark Sky presented the 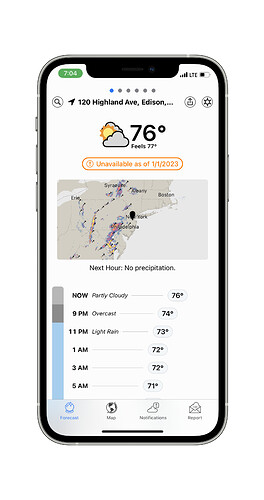 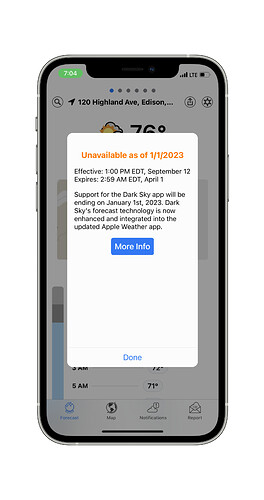 I knew its demise was coming; just didn’t know when. I do like the way they presented the deadline – no pop-up, and it’s visible where you can’t miss it.

For me, I really liked Dark Sky’s old UI, before they revamped it; if they were still using that, instead of the current one, it would be a lot disappointed. Given that, the difference between the Apple Weather app and the current Dark Sky app is fairly small, and I’m good with switching to the former. YMMV, of course.

I still enjoy using their website. For my home, their forecast is not identical to Apple’s and I appreciate being able to look up theirs. I dread the day their web page no longer works.

As I recall the dates were announced a year or more ago. Perhaps they recently started posting the banner notices, but I’ve been seeing them for at least two or three months on my Mac as it has long been my go-to weather page.

My wife will be disappointed, it was her fave. I had moved on to a combo of Windy for detail / local and Apple’s weather for a quick overview, mainly accessed via Siri.

The globe was my favorite part – are they killing that too? That’s a shame and so pointless.

This is, unfortunately, pretty standard stuff when a big outfit like Apple buys a little startup: they often do it in because it’s competitive. I’ll miss those chimes announcing “rain starting in 7 minutes, ending 12 minutes later.” Nothing else comes close to its accuracy (which has diminished significantly since Apple’s purchase).

One nice touch: When it’s raining, sthe raindrops in the background animation bounce off the information cards.

I noticed the raindrops, too. And they rain right on through between half-width cards. Fun.

But I agree with folks who note less accuracy in the Apple app.

The globe was my favorite part

Apple weather will show you a map of the world and world wide precipitation and temperatures, but not a globe if you zoom all the way out. The globe was fun to spin.

I got Dark sky for my iPad. No Apple weather there unless it isn OS16. So a big loss for me.

Here’s something I didn’t see mentioned. I use the hourly wind forecast to plan my bike rides. Apple’s weather can tell me the current wind (as does my weather station) but I really like seeing the hourly estimate. I used to use the Weather Channel app but deleted that quite a few years ago. Is there a way to see this is iOS 16 or do I have to go to another app again? (right now I go to Dark Sky on the web)

Here’s something I didn’t see mentioned. I use the hourly wind forecast to plan my bike rides. Apple’s weather can tell me the current wind (as does my weather station) but I really like seeing the hourly estimate. 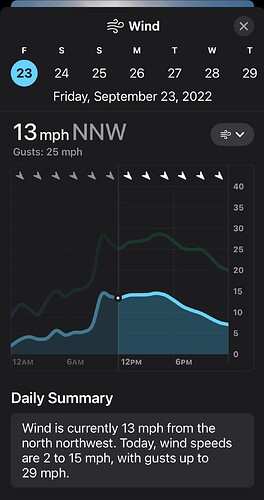 In iOS 16, there’s a drop-down menu on the top right that lets you select what hourly estimates you want. Wind speed and direction is one of them.

THANK YOU! This just showed up in 16? I haven’t run the update yet and couldn’t find it in 15. 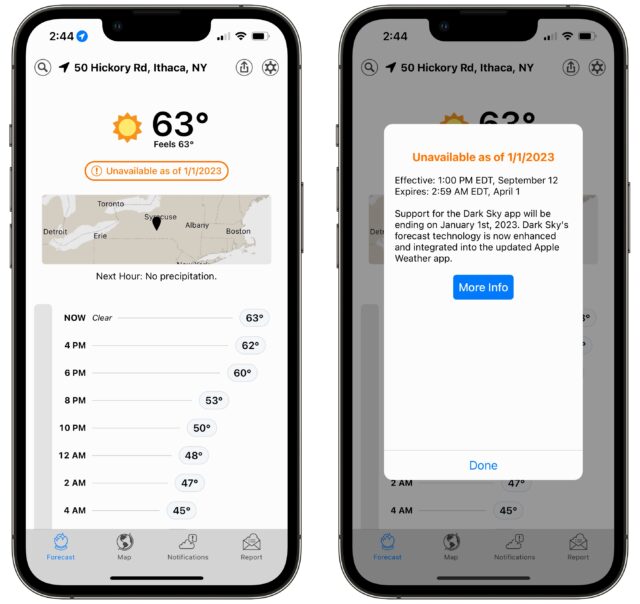 Thanks Adam! Sorry I had missed the article the other day. I look forward to trying the new features, not sure I want to pay for Carrot. Is it me or can one not see the subscription cost unless it’s downloaded? I had downloaded it at one point but deleted it.

Looks like the pricing details are in the press kit. It’s not cheap, so it depends on how weather-involved you are.

Thanks! I like weather a lot but pretty sure I don’t want a subscription for that much. I’ll wait till I upgrade the phone and go from there.