Can anyone tell me the best adapter, or type of cable to use for USB-C (M1 Mac) to an old high-end monitor? Which adapter/cable method is best?

If I recall, there are adapters that sit between T4-C connector and the device (e.g. a monitor). I don’t know the coverage of the types however. Google it.

I’ve googled quite a bit and I even have a fair idea of the subject, but since Google is largely pointless these days, I thought I’d see if anyone with a good understanding could help out.

Can anyone tell me the best adapter, or type of cable to use for USB-C (M1 Mac) to an old high-end monitor? Which adapter/cable method is best?

I recommend DisplayPort as first choice and HDMI as second choice. My favorite monitor cables include

There are other vendors and approaches such as USB-C to DP or HDMI female adapters and appropriate DP or HDMI cable. The latter is what would commonly be used for connecting to your TV input.

If you go with DisplayPort, make sure that the adapter uses the proper shape and size. DisplayPort and miniDisplayPort (the connector that is same size and shape as Thunderbolt 1 and 2))are different.

Alan… I’m going USB-C to DisplayPort. From what I can see, the DisplayPort plug doesn’t change between versions and is backward compatible.

GFS,
I see you have had some response. congrats.

Unfortunately the screenshot I attached to your request didn’t make it into Tidbits system. I’ve attached it again. We’ll see if it gets there.

My Google search was "Thunderbolt adapter monitor” and return 20+ adapters.

I also searched for “Thunderbolt adapter HDMI monitor” to turn up another list but I didn’t send it. However, in these searches, I did find one adapter that had a Type-C male connector. Interesting because that adapter would be plugged into the M1 and used the native monitor cable (assuming HDMI or Display Port) obviating the cost of purchasing a TB cable. 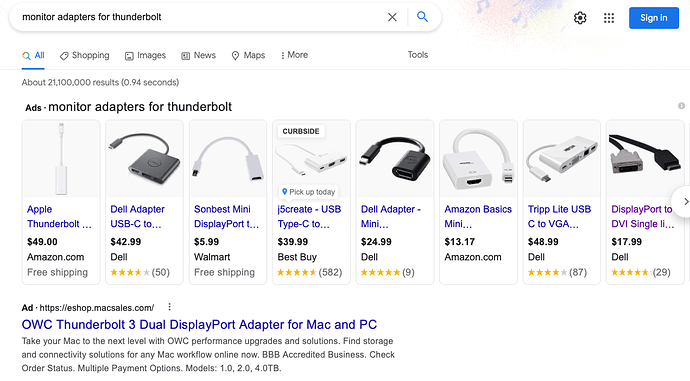 Both USB-C and Thunderbolt-3 standards support an “alternate mode” where DisplayPort video is carried over the cable. Apple supports this feature on all of their products with USB-C/TB3 ports.

So you can use a cheap passive adapter to connect this to any DisplayPort (and by extension HDMI and single-link DVI) display.

Of course, if you want to use that port for USB/TB connectivity in addition to driving your display, then you’ll need an adapter with some active circuitry. For this situation, I’d look at some basic USB-C docking stations in addition to adapter cables. Depending on what features you require/want, they may be a better option.

This is what you’re looking for. $16 plus $3 discount right now with coupon. 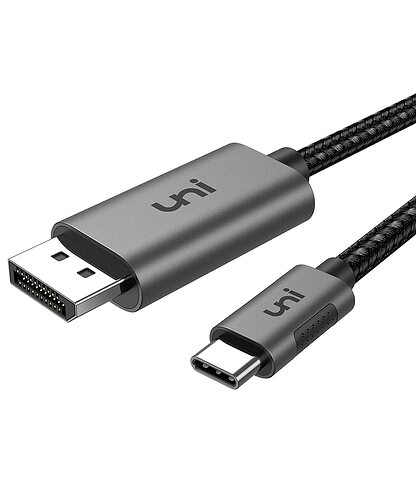 Michael,
thank you for taking the time to look through those options! Very kind of you.

David,
this is what I discovered. Displayport is ~6 years younger than hdmi and is backwards compatible, which is essential in this case.

Simon,
that’s exactly the cable I went with!

this is what I discovered. Displayport is ~6 years younger than hdmi and is backwards compatible, which is essential in this case.

More accurately, there are common ancestors. Since I love to write about history…

HDMI (December 2002), builds over DVI, adding features designed for consumer electronics support, including audio, HDCP encryption (which some DVI displays also support), device control, and even Ethernet data. Because it is based on DVI, a computer that provides single-link DVI video can drive an HDMI display with a simple adapter cable and a device that provides HDMI output can drive a single-link DVI display (video only - no audio or other HDMI features).

DisplayPort (May 2006) was introduced as a successor to VGA and DVI for computer monitors. The original version supports up to 8.6 Gbit/s (and can support 2560x1600 at 60Hz). Later versions (2.0 was released in 2019) support up to about 77 Gbit/s and can support 8K video at 85 Hz - which practically means it can support anything your computer and display can support.

Although DisplayPort is not compatible with DVI or HDMI signals, there is a dual mode variation, where a device can detect when the other end of the cable is DVI or HDMI and will fall back to a compatible mode. It’s been my experience that most computers with DIsplayPort interfaces include dual mode support. I don’t know how many displays have dual-mode ports, but it’s probably less important because quite a lot of DisplayPort displays include HDMI ports.

There are two standard DisplayPort connectors. The “full size” connector and a “mini” connector. Apple introduced the mini DP connector, but it can be found on computers and displays from many vendors.

Additionally, USB-C and Thunderbolt (all versions) support an “alternate mode” where you can use the connector to carry DisplayPort video to a display with a passive adapter cable.

Apple’s devices also support DVI/HDMI output via their mini DisplayPort, Thunderbolt and USB-C. They don’t document it as “DisplayPort dual mode”, but the results are pretty similar. They also offer relatively inexpensive adapters for VGA output over these ports - a feature that is definitely not part of the DisplayPort standard, but seems to be common on computers (not just from Apple).

My colleagues and I have had a lot of “fun” recently, with a switch to new USB-C based MacBook Pros (the 2019, Intel model).

We’ve all got various different configurations of monitors in our home offices, plus new HDMI/DisplayPort capable monitors at work.

I still have a first generation (non-HDCP) 23" Apple Cinema Display. (I like those extra 120 lines!)

Previously I was able to use a Mini-DisplayPort to DVI-D adapter, but that wasn’t compatible with any USB-C to MiniDisplayPort adapters that I could find. In the end, I’ve been successfully using a USB-C to Dual Link DVI Active Adapter [link: Amazon UK] from “Cable Creation”. Although the 23" is not Dual link, the important part of the specs is, I believe, the “Active”. Another simpler, cheaper adapter I tried was not compatible with my non-HDCP display.

Some other tidbits of info that we’ve learnt…

We’ve been successful with a CalDigit Thunderbolt 3 Mini Dock to use those multiple DisplayPort monitors.

If you’ve got multiple HDMI displays and are thinking you’ll find something with one plug to connect to the Mac beware of getting adapters that need “MST” (Multi-Stream Transport) support. This is what some (the cheaper ones…) require to provide two outputs from one USB-C input but (as of Big Sur) macOS doesn’t support it. Not producing two different display outputs is usually buried in the small print or in the reviews of disappointed customers.

You can only connect multiple displays, via one plug into a Mac, with the (more expensive) Thunderbolt 3-based devices (like the above-mentioned CalDigit TB-3. It looks like they have an 2 x HDMI-output model too, but none of us have tried that one.)