For the new M1 Macs, Apple uses the term “Thunderbolt / USB 4.” I had interpreted that as meaning “Thunderbolt” (presumably 3) and “USB 4,” but I just saw an OWC article that suggests it’s really “Thunderbolt 4” and “USB 4.” 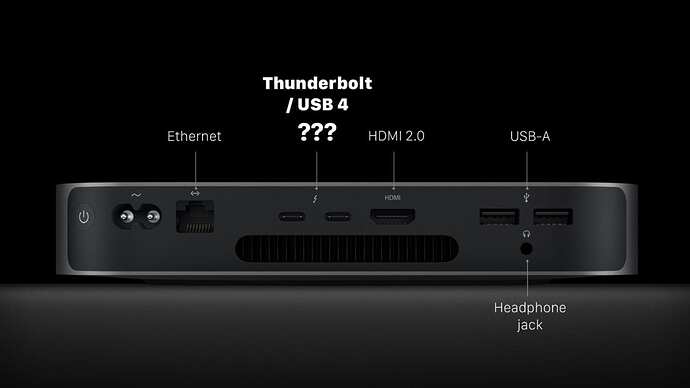 Well… I really like how Apple is presenting Thunderbolt as "Thunderbolt / USB 4" on its latest Macs. You see, Thunderbolt 4 finally promises PC/Windows

But even that article says:

As you see in the graphic below, Apple alludes to this very idea. “Thunderbolt / USB 4” is “Thunderbolt 3” – there is no need to even call it Thunderbolt 4.

A Google search on “Thunderbolt 4” +site:apple.com doesn’t provide any useful information from the horse’s mouth.

So does anyone know if we’ve really moved to Thunderbolt 4 or not?

The OWC article also links to an article from July, when TB4 was introduced: Intel Introduces Thunderbolt 4: What It Is and Does It Matter?

It includes this diagram (from Intel?): 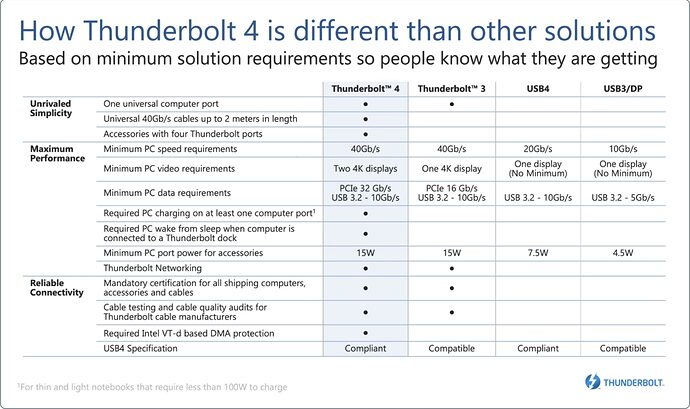 In it, you can see that it pretty much says the same thing that the latest article from OWC says. It is primarily making mandatory all the features that Apple has been (optionally) supporting for several years:

The new features are:

The things that have not changed from TB3 are:

In other words, the only distinguishing feature between TB4 and Apple’s existing TB3 implementation is support for 4-port hubs and USB4. Which, for all we know, they might be able to add to older TB3 Macs with a software/firmware update.

So why did Apple use the funny language instead of explicitly saying “TB4”? My guess is that the software/firmware for 4-port hubs isn’t quite finished. Until they ship that capability, they can’t legally say it’s TB4. Once they start shipping and supporting the capability, I will expect the branding to change.

Yes, but that list also says “USB 3.1 Gen 2” and not “USB4”. That may be a list of backward-compatibility modes, not the port’s native capabilities.

But (as I wrote above), there’s not much difference between Apple’s existing TB3 implementation and TB4.

Yes, but that list also says “USB 3.1 Gen 2” and not “USB4”. That may be a list of backward-compatibility modes, not the port’s native capabilities.

You’re right. On another tech specs page for the M1 MBA, Apple lists video support as “Thunderbolt 3 Digital Video Output”, so that’s another clue that it may be TB3, at least pending your suggested firmware update to allow TB4 dual 4K displays (Apple is only supporting one TB connected display with the M1 Macs for now, and they haven’t said/hinted that there will be a future second display supported.)

Ooh. Thanks for pointing out the dual-display capability. I don’t think they can call it TB4 if they only support one Thunderbolt display, which is the case for all three M1 models (the mini only supports dual displays using one HDMI and one Thunderbolt).

If it is possible to later support two Thunderbolt displays with a firmware update, that will be great, but if the M1’s GPU can’t support it, then it won’t be until the next generation of Apple Silicon that we see the ports marketed as TB4.

In the final analysis, I think we all know what the computer supports. We’re just discussing why Apple chose to not mention a Thunderbolt version number in their marketing materials.

A new OWC article is saying that Apple can’t use the Thunderbolt 4 term explicitly because the M1-based Macs don’t support 8K monitors. 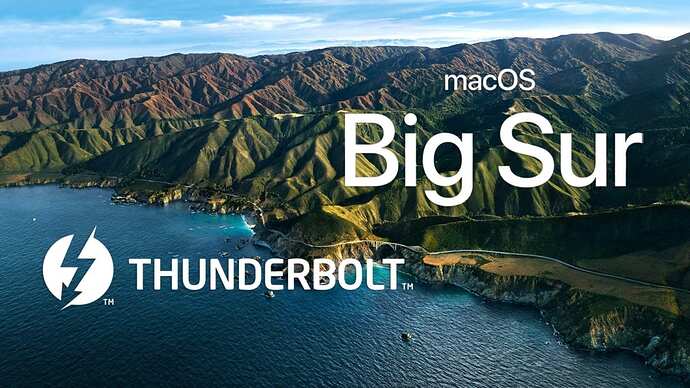 BIG NEWS for BIG SUR: Thunderbolt Devices & What We Can Verify

Now that Big Sur has arrived, we have been doing our fair share of testing. One question people have is, "will my Thunderbolt gear work with macOS 11?"

And indeed, Apple seems to be sticking with the “Thunderbolt / USB 4” moniker.

About the Thunderbolt ports on Mac

Use the Thunderbolt port on your Mac to connect your Mac to an external display or device.

And indeed, Apple seems to be sticking with the “Thunderbolt / USB 4” moniker.

That page has this line:

That I find is highly confusing to the not very technically inclined reader. If you have a cable that is certified for “USB 4”, as Apple calls it, that may well be true. However, you most certainly cannot use just any USB cable and expect a TB3 device to work with it. In fact, the very reason TB3 cables are more expensive than USB-C cables are because of their different characteristics (wires, shielding, etc.). I don’t think they’re doing people a favor when they insinuate that essentially any USB cable can be used to connect USB or TB devices. Even if we for a moment disregard that there are in fact different flavors of “USB-C cables”.

A new OWC article is saying that Apple can’t use the Thunderbolt 4 term explicitly because the M1-based Macs don’t support 8K monitors.

Interesting. The chart they previously presented (see above) only says support for dual 4K displays is required. An 8K display is worse, because it has 4x as many pixels (and therefore requires 4x the bandwidth) as a single 4K display.