Received a notification yesterday that Security Update 2020-005 was available so installed it.

A while later I wanted to do some (unrelated) testing so went into System Preferences to set up a new user account named “Test60”. User added OK but did not appear listed in the Users & Groups preference pane. Tried again and got an error message saying that user already exists.

Tried adding a couple more new (standard and admin) Users with different names. Same result. Seem to add OK but aren’t listed in Users & Groups, nor do they appear on the login window (which is set to display list of users) or under Macintosh HD/Users.

Spent two and a half hours on the phone with Apple Support – screen sharing and working through various troubleshooting/diagnostic options to no avail. Issue has been escalated to Apple Engineering with follow-up scheduled by Apple for next week.

I vaguely recall reading about a similar issue a few years back which was fixed when Apple issued a supplemental.

I just tried adding a user on a MacBook Air with 10.14.6 and the latest security update and I can confirm that I am seeing the same thing - the user is not listed in Users & Groups or on the logon page. And if I change login options to “name & password” from “list of users” I cannot log in as the new user with the proper name/password.

I hadn’t yet installed the Security Update on my MacBookPro 2017 running 10.14.6, so I created a new user (Test Matrix), it exhibited normal behavior, even logged in as new user to make sure.

Then installed the Security Update, and attempted to create another new user (Test Matrix2), and as you discovered, the new user does not show up in the Users & Groups.

updated:
probably not relevant, but adding anyway
When I created a new user prior to installing the Security Update, I got a notice from Little Snitch asking for permission for trustd to connect to ocsp.apple.com (screenshot below) 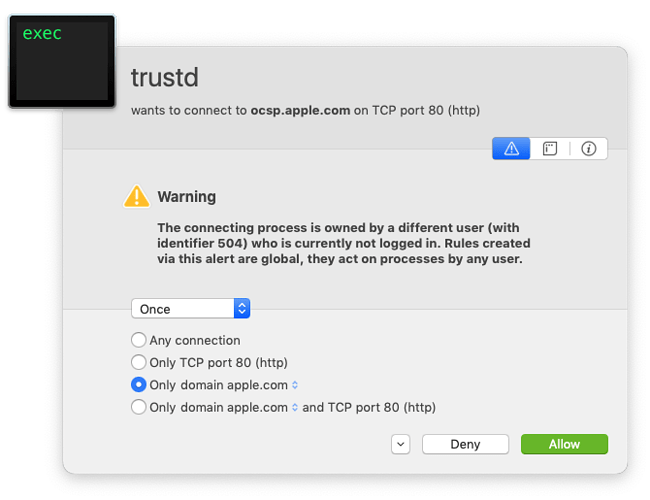 After the Security Update, I did not get this notice from Little Snitch when creating a new user.

Thanks very much Doug and Seth, I’ll point Apple Engineering to this thread and let them know the issue’s not restricted to just my set-up

Looks like the problem may be a bit bigger: 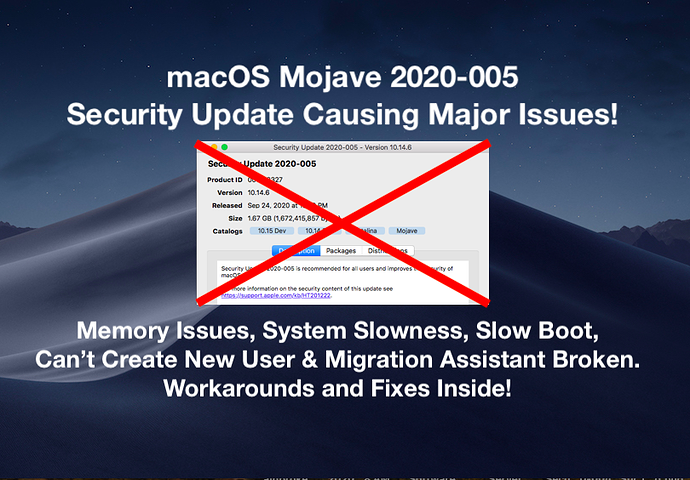 Reports coming in from users who are starting to have major problems after installing the Mojave 2020-005 Security Update. Workarounds Inside

I was hit on this with a Mac I wiped on Friday. Today could not run Migration Assistant nor add a user account. Since there was no data on this iMac I am wiping it now. 2013 iMac with fusion drive.

Apple released a security update for Mojave users a day or two ago. It is causing major problems for users and it is strongly recommended that you avoid it entirely:

Reports coming in from users who are starting to have major problems after installing the Mojave 2020-005 Security Update. Workarounds Inside

I made the mistake of installing it, and now my iMac is running slow and flaky. I REALLY regret installing it.

By coincidence I wiped an iMac Friday and installed 10.14.6 and all updates. This morning I could not use Migration Assistant nor could I create a new user account. I couldn’t find anything in my searches on the web but this article explains why I encountered problems. Thank you for posting it.

One was just a bit wonky, the other has made a mess of many who installed the update. So what went wrong?

Hmmm, this discussion should also include the simultaneous release of Safari 14, which for many on Mojave was a disaster piled upon more disasters, all occurring at once. And for those unfortunates, no clear cause of the problems.

Indeed, but please keep the discussion of Safari 14 in that topic:

Indeed, there has been mounting evidence provided by Enterprise Mac IT testing that these issues are only showing up when Safari 14 is installed before Security Update 2020-005 (or 2020-004 and probably even earlier Security Updates), the Security Update is apparently overwriting some portions of WebKit which impacts Safari, Mail and other functions that use WebKit in order to function properly.

Mojave 2020-005 Security Update no longer shows in Software Update for me. Looks like it has been pulled ("page you’re looking for can’t be found):

Both Security Update 2020-005 (Mojave) and Safari 14 for Mojave were pulled from the Software Update catalog yesterday. They should return after fixed shortly.

Late this evening, Security Update 2020-005 (Mojave) and macOS Supplemental Update 10.14.6 (which includes Safari 14) was re-posted to the Software Update catalog and should be available to users. So far I’m only seeing the Supplemental, but it probably needs to be installed first.

I recommend most users wait for the experience of others before installing either of these.

Please note: the inability to see newly created users was the only bug I had. I don’t know whether the Supplemental Update has fixed other problems reported by various people.

Hmm, no Security Update 2020-005 or any other updates appearing in Software Update for me (besides the usual Catalina upgrade option)

Confirmed. Not immediately seeing any reason after scanning 001-48327.English.dist file. I notified my sources and will let them try to figure it out as it’s too late for me tonight.