Don’t waste precious time manually repositioning and resizing macOS windows. You can automate that task to a large extent using native macOS controls, and third-party utilities give you even more power. Julio Ojeda-Zapata looks at two of the top window-wrangling apps.

Moom is one of my “must have” apps.

OMG. Maybe I’m the only one here, but I feel like I’ve never before heard about click and hold to get split view.

If you’re having second thoughts while dragging, esc does not stop and leave split view mode (unlike for example cmd-shift-4). Any other method to get it to just bail in the middle of dragging?

Rectangle… Awesome app! The fact that it does 90-99% of the other similar apps do, but is open open source and free, is awesome!

What is missing from this very good list of apps is Stay by Cordless dog. It remembers the window positions, which is especially useful when using multiple monitor setups.

Thanks, dvdweyer! Stay is something I’ve been looking for as long as I’ve used multiple monitors. It never used to bother me when I used an iMac with multiple screens, but with a laptop that I’m constantly plugging/unplugging it begins to be a hassle when windows move from one screen to the other all the time.

The only thing I really want is for windows in a newly-opened app to be centered vs. at the left-side of the desktop. What’s the least expensive way to accomplish what should be a built-in OS default setting?

With so many apps only available on the App Store, being able to demo before buying is becoming a thing of the past. . .

The only thing I really want is for windows in a newly-opened app to be centered vs. at the left-side of the desktop.

I have no idea what might be causing that for you, but it certainly is not and never has been the default position for any app I’ve ever used. Sounds like you must have somehow enabled split-screen with an invisible something on the right side?

I have seen similar behavior. You can get Rectangle. It will let you define a key combo to shift any window to the center. It’s free.

I really don’t understand why Apple doesn’t let you set a default size for any new window you open; at least they let chose the View you prefer. In earlier versions of the OS there were some kludgy routines you could do and the windows would behave that way for awhile.

It’s the best (and quickest) solution I’ve found to date.

Does Magnet or Moom (or any of the other apps) reproduce the MacOS 9 ability of minimizing windows to their title bar? I really miss that function … Thanks

I have suffered from that annoying problem for about as long as OS X has existed. I even started a thread on the topic (I’d link to it, but I think it got lost when the forum moved to Discourse) but I never really solved it. No matter what pref I deleted or which Finder workflow we tried, it never held on to my preferred settings. And nuking my entire user home just to fix this issue was not a viable option.

Ultimately, the best I could do was create an AppleScript (thread here) which I can invoke to get the Finder window set to the dimensions and view I want. But every Finder restart I need to run it again. Sigh.

The way around your problem with the small window, I think, in the Finder at least, it to size a window the way you want it, then open a new Finder window (Command-N) and adjust it to the same size, laying it over the top of the original. Then switch to the original window and close it. Then close the second window, and open a new Finder window. It should be the same size as your sample windows. This might work with other apps, like Word, if those windows are small, too. But I haven’t tried it. I’ve run into the small window problem rarely, but I have seen it before.

I’ve been using Finder Window Manager for a long time. It offers a similar kind of customization to Zoom. Unfortunately, it is not yet 64bit. The developer’s web site promises updates and improvements, but there is no timeline specified. FWM still works in Mojave, fortunately, as many old apps do not. In any case, I’m in no hurry to migrate to Catalina, which kills off way too many old hands, including most of Adobe’s CS apps. I don’t think I’m alone in this. Many people have long since tired of the expensive Adobe upgrade policies and have laid back with CS5 and 6, and some even older versions. The ever more popular subscription model is another disincentive—as is the Apple App Store model with no trial versions. Some of us are old enough to remember the golden age of shareware. Even Adobe used it for a year with the beta version of Lightroom, which gave them a huge head start over Apple and Aperture—from which Aperture never recovered. By the time Apple lowered the price and offered a trial period for Aperture, it was too little too late. Some app developers still offer a trial period, but they now seem to be a distinct minority. Many changes don’t necessarily improve things; they just move the deck chairs around. So I’m hoping that Finder Window Manager isn’t changed too much, and that it will use-or adapt-the old app’s preferences so that I don’t have to recreate all my window sets. By the way, I’ve never cared for the window snapping apps. I don’t like my windows to sit at the edge of the screen, or fill up half the screen, and a quarter of the screen is too small, in most cases. I use screen edges to see the desktop, and the edges of other app’s windows, which I can bring forward with a click. So, that’s my 2¢, or maybe 3.

Al, it happens with Preview. . . Split-screen is not enabled (I would have noticed that). I would like new windows to open in the center of the desktop without having to resort to a keystroke or dragging the window.

Simon, thanks for the suggestion. I’d prefer an auto-centering preference but a keystroke combo is better than nothing. . . I just installed Rectangle and it does the trick!

I hear you. I realize it’s a workaround at best. At least it’s free. Considering how much the tool does (and does well) I’m surprised it’s free. Nice dev.

It’s the best (and quickest) solution I’ve found to date.

Try FinderMinder from Irradiated Software. It’s free. unfortunately, it’s for the Finder only, but it would solve your Finder window issue. 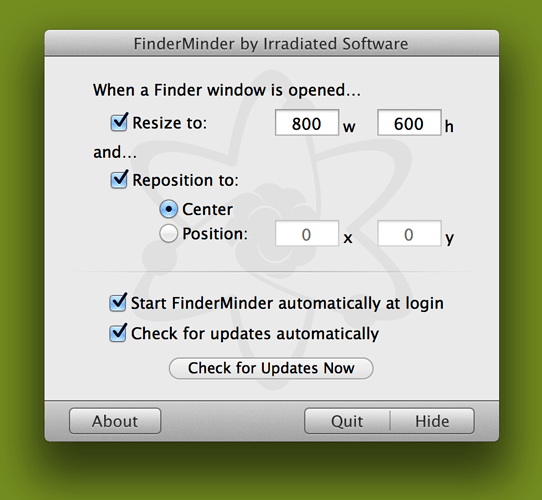 I don’t remember what I paid for Keyboard Maestro, but whatever it was, it was worth it just for the power it gives me to move windows to where I like them to be. Apps launch with windows in the position I like, and I’ve got keyboard shortcuts for moving them when I need to.

I have plenty of other automations set up in KM, but I use my window-management stuff numerous times a day.

I’ve used Zooom/2 for a long time on my iMac, and it still works, but it is no longer supported (or developed, or available for download…). Does anyone know of any replacements for it? The thing it offered that none of these programs seem to offer is that I can hold down a bunch of keys and either move or resize whatever window the mouse cursor is over – not to preset positions or sizes, but just like if I was grabbing the resize area. But I can do this for any window, even if it’s not the front most, and I don’t have to be anywhere near the resize area…