At its Far Out event, Apple expanded the iPhone line by introducing the ho-hum iPhone 14, the large iPhone 14 Plus, and the exciting new iPhone 14 Pro and 14 Pro Max.

Does anybody dare to guess when Apple will finally switch to USB-C connectors for the iPhone?

oh well, i won’t be buying a new iphone for a long while. guess it was futile to hope the fruities would continue to make a small phone. already have the 13mini. as is, it’s still a tad too big but it was the best one could hope for.

I had an online class during the event so I was only watching out of the corner of my eye. Visually, the most interesting part was the Dynamic Island. They really ran with it. I think they did a great job.

I’m not in the market for new stuff anyway. My iPhone 12 and Series 5 Watch are doing everything I need. And I’m still paying off my Mac Studio and Studio Display.

I am still happy with my iPhone 11 Pro and Series 5 Apple Watch.

It is not that I feel the iPhone 14/Pro models are not good, but just how good the recent iPhones have become that even older phones are still very capable.

I’ve been thinking about upgrading from an iPhone 11 this year. The battery is starting to show its age, and it doesn’t support 5G, which I figured has been around long enough now so it’s worth adopting.

The fact that iPhone 14 only supports eSIM, however, has complicated matters. Neither Ting, my former provider, nor Tello, my current provider, supports eSIM yet. A Tello rep told me yesterday the company hopes to have support by December, so I’ll wait a few months to see if it follows through.

Apple may be starting a new trend, and other phone manufacturers will follow suit and switch to eSIM-only phones. This trend might finally spur the adoption of eSIM by MVNOs.

Good thing the 14 is just a “warmed-over iPhone 13”. That means we actually did get a 14 mini. It just happens to be called 13 mini. And it’s cheaper too.

I’m not sure I get the whole point of always-on display. When I stick my iPhone in my pocket, the display doesn’t need to remain on — what purpose would that serve other than drain battery (even if it’s just a little due to fancy display wizardry)? And when I got to bed I sure don’t want my display to remain on even just a little bit.

I think often times what I’d like much more is a mode where I can display whatever a certain app is showing as a “lock screen” just that it doesn’t react to taps or on/off button press. Basically so I can use my iPhone to monitor something that gets displayed by that app without having to unlock the phone or worry about accidental input when I drop it into my pant pocket to free up my hands for a moment. But AOD doesn’t appear to enable that either.

I’m not sure I get the whole point of always-on display.

This is one of the main reasons I’m interested to try the iPhone 14 Pro—to see how it works and if it’s useful or annoying. I strongly suspect that we’ll be able to turn off the Always-On display, if the Apple Watch is a precedent.

Use the Always On feature with your Apple Watch

Apple Watch Series 5 and later can display the time and other glanceable information, even when your wrist is down.

Oh, I’m sure Apple will let users turn off AOD. I’m not so much concerned with not having it, I was wondering what the use case is for those keeping it on.

I did in the meantime learn that supposedly dropping it in your pant pocket shuts off the screen. So no extra drain there. Apparently. (if it works reliably)

So, perhaps there are people who want it to always stay on when propped up on a desk? Before AOD that would require setting auto-off to never which means you’d still be draining battery when you drop it in a pocket and forget to manually turn it off. I guess that would be an improvement for those folks.

Thinking more about this, I’d love for some magic button press that would set the iPhone into a mode where the display will not react to button press. Together with AOD that would be great for times when I use an iPhone app to just monitor something. At first I was going to suggest using the mute switch for that (because mute rarely means mute these days), but in the few cases where mute actually still does mute, I’d really miss not having it.

Recall all the rumors about 12 and 13 mini not selling according to Apple’s expectations? Well here we go again. Now the claim is the 14 Plus is not selling. 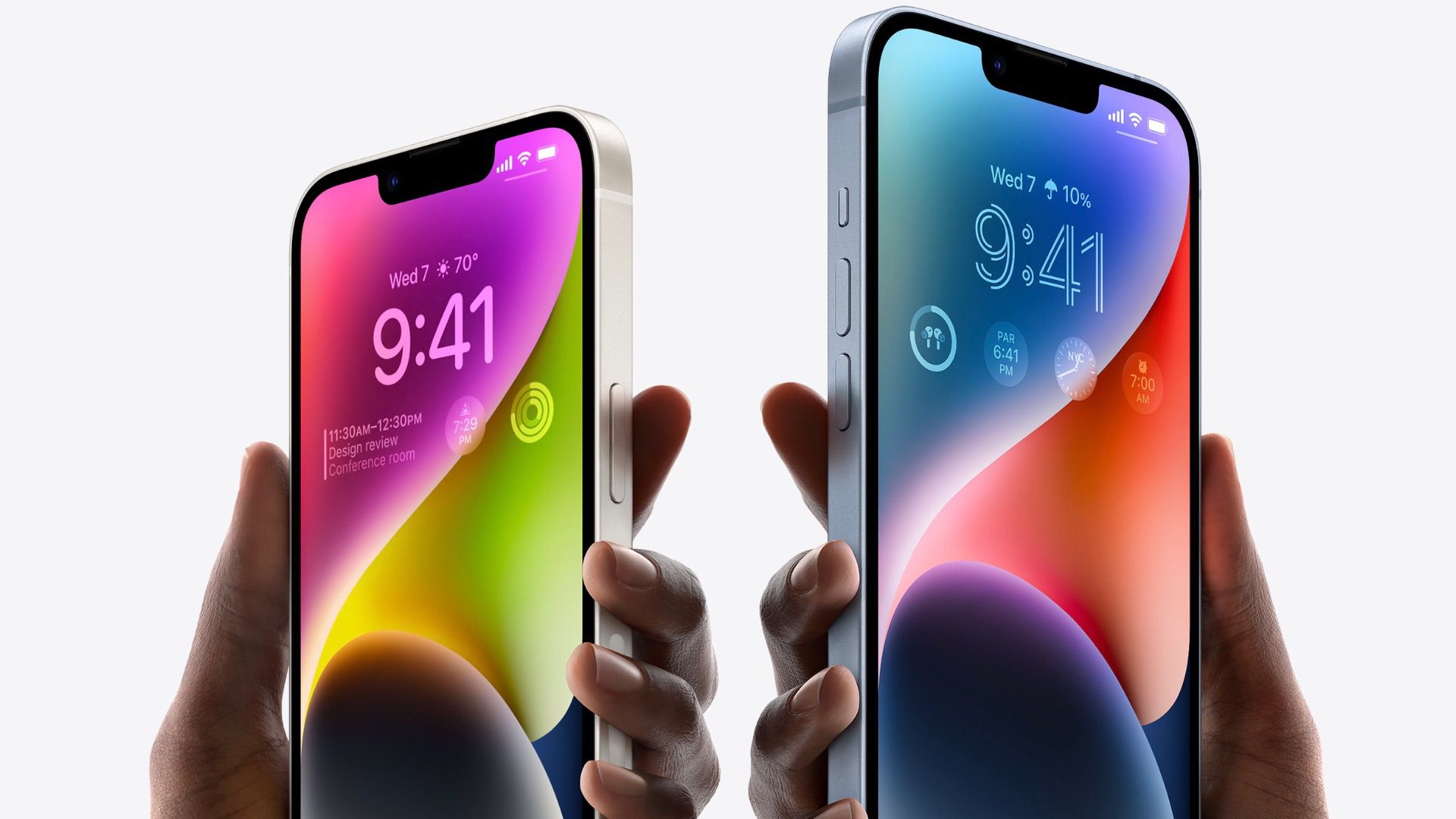 The iPhone 14 and iPhone 14 Plus have seen "bad" pre-order results, indicating that Apple's positioning of the two new standard models...

I was wondering what the use case is for those keeping it on.

Driving in the car while you are not navigating with the iPhone in a mount - you can see if there are any new notifications at a glance, see widget info on the Lock Screen, etc.

Or the screen staying lit while playing music, like it used to do.

perhaps there are people who want it to always stay on when propped up on a desk?

Think of a possible replacement for a clock-radio on a nightstand. You get a charger-stand that holds it upright, and with the always-on-display, you’ll be able to see the time without needing to interact with it.

Before AOD that would require setting auto-off to never which means you’d still be draining battery when you drop it in a pocket and forget to manually turn it off.

Which could definitely be a problem.

One feature Android phone have always had (as a part of the “Developer options”) is a feature where the screen will never sleep when connected to a power source, but will go back to its configured sleep interval when running on battery.

I’d love iOS to get this, since there are plenty of uses beyond the needs of developers. Like when the phone is in a charger-dock on your desk (see above) or on the dash of your car. Today, some apps (like Maps) will prevent sleep when they’re running, but it’s up to each app and some (like the Music player) won’t prevent sleep.

I’m sure Apple will say that the solution is CarPlay, but not every car has it and I’m not going to buy a new car in order to get it (even though the car makers would really like me to do that).

And CarPlay doesn’t support the iPod Touch for some inexplicable reason - my CarPlay-equipped vehicle falls back to a legacy iPod interface when it is connected, which isn’t nearly as nice. Of course, the Touch is now discontinued and isn’t supported by iOS 16, so that’s one feature I’m never going to get.

Re no physical SIM: I travel -Europe & Mexico mostly but Asia too. I upgraded to 12 because it offered the opportunity to put my “regular” network on a e-sim, and to install physical SIMs that I could buy relatively easily almost anywhere I went. What a deal! Not having a physical SIM is a great loss to me; it is not available world wide, if it is available it is more difficult to buy and does not make any sense for a short stay. The article suggests that loosing the tray is an advantage since e-SIM may come to your next destination “soon”. I disagree; the combination of the physical and virtual SIMs was a brilliant idea and a sold travellers on an upgrade. Why would I buy a phone that has an average life of 3-4 years at best, for a maybe in far the future convenience? I hope this idea does not spread to the other models. For now I’ll hang on to model 12, maybe longer than I planned if the physical SIM option disappears.
Adam

If you’re buying foreign SIMs just for data, then a Flexiroam eSIM may be a good solution when the physical SIM tray goes away. They provide data options in most geographic regions using a single eSIM.

One of the problems for Apple is that the average time to upgrade is increasing Analyst: Average iPhone upgrade cycle now lasts four years, up from three in 2018 - 9to5Mac On the other hand it is a good selling point that a lot of people don’t need to upgrade until their phone is 4 to 5 years old. What they need is a feature that will need the latest phone, and is so useful that people will want to upgrade.

Was waiting for the 14s to upgrade, but disappointed there’s no mini, so will probably buy the 13 Mini. At least I hear it’s discounted (I think).

I missed SlackBITS this time out, working with my daughter on College applications…

But tuned in later, I am definitely in the running for a 14 Pro this time. Not a lot wrong with my 11 Pro but the newer cameras beckon…