If you received a free year of Apple TV+ last year, Apple is about to give you a few months more for free.

Are they still doing the free trials? If you get a new iPhone 12 in Nov, will you still be able to sign up for a free year? I got my new MBP in May, but didn’t sign up. Didn’t see a whole lot I’d want to watch.

This sounds awfully desperate to me…people who got the free trial aren’t signing up for paid subscriptions. But it’s no surprise given how dismally TV+ ranks in recent surveys among streaming video on demand services in quality, variety and quantity of content, as well as ease of use. They come up dead last in every case.

Streaming may be surging but the rising tide is not raising all of the various services as highly as others with Apple TV+ in particular attracting criticism for the quality of its offer according to research from Flixed.

TV+ needs more and better content. And I don’t understand why a company that is so focused on ease of use and elegance has done such a bad job with the TV+ interface. Why Apple doesn’t buy an existing studio, or at least license stuff, is beyond me.

But there have been some very interesting rumors of TV+ AR content debuting along with the long rumored AR glasses. This could pump up sales for Apple hardware along with TV+ and Arcade:

Yes, you still get a free year when you buy an eligible device. It’s at the top of the banner for the TV+ web site at Apple.com.

I’ve watched three shows during my free trial - The Morning Show, For All Mankind, Ted Lasso - and the first and last were great IMO, the second was pretty good. The movie On The Rocks coming later this month looks good as well.

I’d love to watch Apple TV+ with the free subscription we just got having purchased a new iMac for my wife but it doesn’t work. Here’s the problem (see my post – 12th post down):

I have free Apple TV+ and plan on subscribing when the free sub expires. Loved both For All Mankind and Ted Lasso. Also some of the other shows (wasn’t thrilled with Central Park). They need to grow a much larger catalog but the shows have been much better than I expected.

But production is behind schedule. Apple was originally planning on 2nd seasons of successful shows around now. Thanks to COVID they are not there. So no reason for people to start paying until 2nd seasons are available.

Agree on The Morning Show and Ted Lasso. I’m liking Tehran so far. It’s not Homeland, by any stretch, but I’m a sucker for this type of thriller. Nothing else I’ve seen was worth time spent.

I saw For All Mankind when it went free at the beginning of SIP. It started off interesting but then IMHO became silly when it went all space GI Joe. The trailer for the second season shows they’re committed to space Rambo so no thanks.

The Morning Show, despite interesting actors, judging from the trailers and reviews appears to be one of these over-the-top series where everybody is perpetually embroiled in staggering levels of drama, a lot of shouting and screaming and crying and some tears too, yet we are still expected to believe this is a depiction of actual life in an American newsroom. Yeah, thanks but no thanks.

I was intrigued by On the Rocks until I realized this is essentially a remake of Lost in Translation with Rashida Jones stepping in for Scarlett Johansson and no more Japan. Gracias, but I’ll stick to the original.

Ted Lasso has I believe to do with soccer in Britain so whatever.

Greyhound was touted as this big epic WWII movie, but then the trailer showed lots of cheap looking CGI and Hanks being as about as unconvincing as I didn’t think he could be.

So, I’m left really starting to wonder what it is with all the TV+ hype. Honestly, is there something with actual gravitas in there?

I’ve been a little surprised and annoyed that there isn’t more Apple TV+ content I can watch with my family. Outside of a handful of kid shows, most of the content is extremely racy. It’s like Apple wanted to push back hard against its goody-two-shoes image. The Elephant Queen was quite good, I wish they’d release more nature documentaries like that.

How about the mini-series no one has mentioned: Defending Jacob
It was an intriguing idea for a book which I enjoyed, and the show was very very well-done. Serious and faithful to the novel.

I too dislike silly ribald comedies, so I haven’t even glanced at Ted Lasso or The Morning Show.

Tiny World looks good, for those who liked The Elephant Queen.

Tehran is quite good. It’s from the writer of Faouda; perhaps not quite up to that level, but very enjoyable and well-made.

I’ve been a little surprised and annoyed that there isn’t more Apple TV+ content I can watch with my family.

This is something that really confounds me. One of the biggest reasons Netflix streaming was such a big instant hit was they had made sure to license content for every age, and just about every interest group, including inking a deal with Disney. This was even before they started producing originals. Once House Of Cards became a tremendous success, they jumped into developing content for every market segment and totally blindsided HBO, Showtime, etc.

A few years ago I read in quite a few sources that Apple was negotiating with a bunch of studios to develop exclusives for kids. They had signed the Peanuts gang, who developed a few shows, and a new one was recently released. They signed a deal with Sesame Workshop, but it will not include any of the original PBS or movie characters. They do have new stuff coming up, but it’s focused on little kids:

Apple TV Plus has unveiled its newest children’s programs, including “Stillwater,” an animated series based on the Scholastic book series “Zen Shorts” by Jon J. Muth. …

There’s even less for tweens or teens, which I also don’t understand. And I have read rumors a few years ago that Apple was poking around to buy an animation studio, but nothing recently. IMHO, their “all originals” strategy is not a good one.

I too dislike silly ribald comedies, so I haven’t even glanced at Ted Lasso or The Morning Show.

Not sure I’d classify Ted Lasso as ribald, but maybe it’s a matter of taste and The Morning Show is Drama, not even close to being comedic.

And I had forgotten Defending Jacob, which I very much enjoyed.

Greyhound could have been much better.

The Morning Show, despite interesting actors, judging from the trailers and reviews appears to be one of these over-the-top series where everybody is perpetually embroiled in staggering levels of drama, a lot of shouting and screaming and crying and some tears too

I guess you never worked in or around a newsroom. Crying and tears are mostly reserved for tragedies like the mass shootings and major disasters; veteran US newscaster Walter Cronkite choked back tears after announcing from the newsroom that the President JFK had just died. Even US President Obama choked up and then shed tears on the podium when speaking about the massacre of children in the Sandy Hook school shooting.

This past March, Hoda Kotb of the US Today TV show cried on camera when discussing how Covid 19 was decimating her beloved city of New Orleans. CNN’s Erin Burnett and Don Lemon did when reporting on suffering and hardship of Covid 19 victims and their families. Though it is still unusual to see a newscaster cry on screen, but what goes on in the newsroom is multiplied in print and broadcast to the nth degree. In All The President’s Men, which is very factual, you see the reporter played by Lindsay Crouse was practically crying when Woodward and Bernstein put the squeeze on her to cozy up to her ex-fiancé who worked in Nixon’s White House to surreptitiously gather some facts about the Watergate break in. After she first refuses and then considers the importance of the story, gets the info from the ex, then you see her wordlessly walk over to Woodward’s desk choking back tears, turns around, and hurries away crying. In Shattered Glass, also based on fact, the serial fabulist Stephen Glass breaks into tears in front of his employers and colleagues more than once while he is outed for making up just about every story he wrote for The New Republic and respected publications.

Whether in print or broadcast, working in a newsroom is an extremely high pressure, competitive, stressful, heavily deadline focused, and often physically and mentally dangerous job, both off and on screen. An excellent article was recently published in Harvard’s Nieman School Of Journalism:

“Permission to be human”: TV Journalists Crying on Camera Is Understandable |...

As coronavirus stories unfold, more and more television journalists are showing their emotions on camera.

I guess I’m just too simple-minded at 77? What I see when I click the Apple TV+ page (after buying a new iPad) says:

After following four additional links, I did, finally, get to one that mentioned in some more 8px sized text the “1 year…free”.

With that kind of “sales pitch”, I’m not surprised that few might be tempted to click the other, much more obvious, “Start Now” links, trusting that there will be a chance to claim some kind of ‘discount’ code! Apple already knows I’m eligible! Surely they still have an old version of (Forethought) FileMaker Pro running!

I just got email from Apple about this. 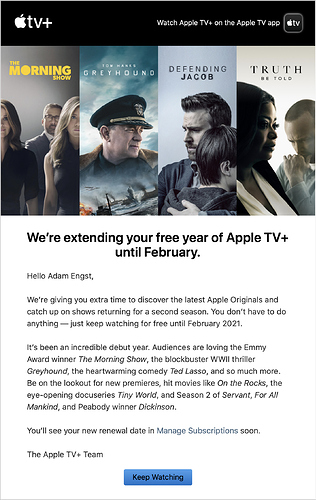 My guess is that I’ll get to watch the first 2 episodes of Foundation (Asimov sci-fi due for release early 2021 last time I checked) for free and have to subscribe for the rest! If so I will be looking at a month to month subscription.

OK, I must admit, Ted Lasso is very good. It’s refreshing to have a show where the main characters aren’t absolute jerks to one another and those who behave badly both get their comeuppance and come around. Guess I just don’t like my entertainment to be full of edgy, unpleasant people who I wouldn’t spend time with in real life.

That said, I wouldn’t subscribe to Apple TV+ just for Ted Lasso, though I might consider an occasional month here and there to catch up, much as we did briefly with CBS All Access to watch Star Trek: Discovery and Star Trek: Picard.

I might consider an occasional month here and there to catch up, much as we did briefly with CBS All Access to watch Star Trek: Discovery and Star Trek: Picard.

We’ve simply waited for these shows to come out on disc. The Blu-Ray discs for a season costs about as much as 4 months of the service, and you can play them years later without paying more.

I’m hoping that Apple does something similar with their original series.