I plan to purchase this app as I can use it for PayPal transaction import as well. It is costly but in the long run will be worth it for me.

There is a button on the bottom “Change amount sign” that will flip the signs of all the amounts so that deposits and payments show up in the right fields. You can save the mapping to a name of your choice to use for next month.

I saved a mapping for the Apple Card in CVS2OFX, but the Change amount sign is not saved and I have to select it every single time. Minor annoyance, but at least I am now able to import those transactions and match them.

Thank you so much for showing me the way.

Amount -> Debit Amount (this gets the signs right) 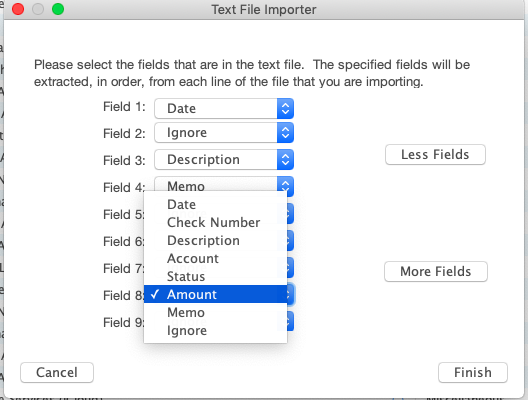 Import… item in the File Menu.

Well, that was the answer. I was using text file import from the extensions menu. Why is that even there if File / Import can do the same thing but better? (Just a note that I wasn’t using File / Import because I though it was only for QIF, QFX, or OFX files. At some point I recall trying to do a text file import that way and having it not work, but that was a while ago, and obviously it’s been fixed, or I just had a bad CSV file.)

Today, Apple added OFX export capability. Unfortunately, I have yet to see a report of it successfully loading in a financial program. There is a report on MacRumours that it failed in Quicken, and when I tried in Moneydance, the application just stalled, rather than presenting a dialog box asking which account to associate it with? The console window showed problems with understanding the file.

I reported the problem to Apple. Others who are interested should try it.If they succeed in loading, please report the application where it worked. If not, please file a report with Apple, so that there will be pressure to fix it.

Today, Apple added OFX export capability. Unfortunately, I have yet to see a report of it successfully loading in a financial program. There is a report on MacRumours that it failed in Quicken, and when I tried in Moneydance, the application just stalled, rather than presenting a dialog box asking which account to associate it with?

It also failed when I tried importing in Moneydance. Looking at the OFX file, there are no CRLF or LF to separate the XML elements, as I believe the spec calls for. However, I tried it after putting newlines in before every XML element and that still didn’t work.

Been lots of import failure reports in Macrumors too. Both CSV and OFX.

Anyway, I wonder if non-US markets will see Apple Card anytime soon? Does Goldman Sachs even operate consumer (non-B2B) stuff in other territories? (If Apple were to stick with the same banking partner across markets.) Isn’t this consumer banking a new avenue for them away from the more risky investment banking of their past, in even the US anyway, so likely international would be a big leap to expect.

The trouble is that Europe has tighter regulations on reward scheme enticements and suchlike. So this likely makes it difficult for Apple to offer a unified matching offering in other markets.
i.e. they likely wouldn’t want to offer better or worse cashback between markets globally.

The post that this message replies to showed the mapping I used to load the monthly Apple Credit Card Statement in CSV format to Moneydance. For the February statement, I made a change to ignore the Category field. As merchant categories differ from expense categories, this makes sense. Furthermore, it allowed Moneydance to autofill the category field based on previous transactions with the same merchant. For reference, here is the mapping that I am now using:
Transaction Date -> Date
Clearing Date -> Ignore
Description -> Memo (this is where transaction details normally appear)
Merchant -> Description
Category -> Ignore (this is the change)
Type -> Ignore
Amount -> Debit Amount (this gets the signs right)

Note: trying to load the OFX formatted file still fails with errors in the console.

I found iCompta would not accept the OFX file for Apple Card, so I exported a few transactions from the app in OFX format and compared the files. The Apple Card OFX file was missing a few closing tags. I found by adding the lines

right before the closing </OFX> tag, I could get iCompta to parse the file correctly and import the transactions.

After making the suggested edit, I was able to import my OFX file into Moneydance. It looks like everything was assigned to an appropriate field. There were two small differences from the way I matched the CSV file:
–The Clearing Date was used rather than the Transaction date for the Date field (accurate from a posting point of view, but harder for the user to match)

Let’s see if we can summarize what’s been learned here so I can do an article. The OFX file works in:

I had no luck importing the QFX file into Banktivity, though CSV import works perfectly (I do have to manually change the sign of the transactions in Numbers first, however). Banktivity does not seem to like something about the Apple Card QFX format.

After adding the two tags, I was able to import the OFX file using Banktivity 7. Quicken 2017, however, wouldn’t import the file.

“After adding the two tags, I was able to import the OFX file using Banktivity 7. Quicken 2017, however, wouldn’t import the file.”

What do mean by “adding the two tags?” I’m interested in how you got Banktivity to import the QFX file.

What do mean by “adding the two tags?” I’m interested in how you got Banktivity to import the QFX file.

I ran into the same problem with Quicken 2017. I downloaded a file from Discover Card to compare against and found it contained a few lines with information about the financial institution. When I copied those lines into the Apple Card OFX file, Quicken successfully imported the file.

When I copied those lines into the Apple Card OFX file, Quicken successfully imported the file.

Interesting. Could you post those lines (assuming they have no confidential information)? I’d like to give it a shot with Q20.