The Case of the Missing iPad Pro: Find My for the Win

Originally published at: The Case of the Missing iPad Pro: Find My for the Win - TidBITS

Faced with a panicking elderly neighbor who thought she had left her iPad Pro at a faraway hotel, Adam Engst saved the day with judicious use of Find My.

Excellent Adam, good for you.

Find My is essential for me. I’m so glad of AirTags, my keys, wallet, laptop and camera bags all with them. Though whenever my wife borrows my car she and I are alerted.

Three really important things here — Find My is an essential, not a luxury — found my new, missing iPhone within seconds after misplacing it.

Don’t get me started on passwords! We’ll just keep nagging! (Howard Oakley at Eclectic Light has a good piece on exporting passwords from Safari at the top of his blog at the moment…)

And a little more like the subtext, but even more important: good neighbourliness is also an essential — Adam thank you for reminding all of us!! It’s part of the basic spirit & values of TidBITS!

There is an interesting story here: 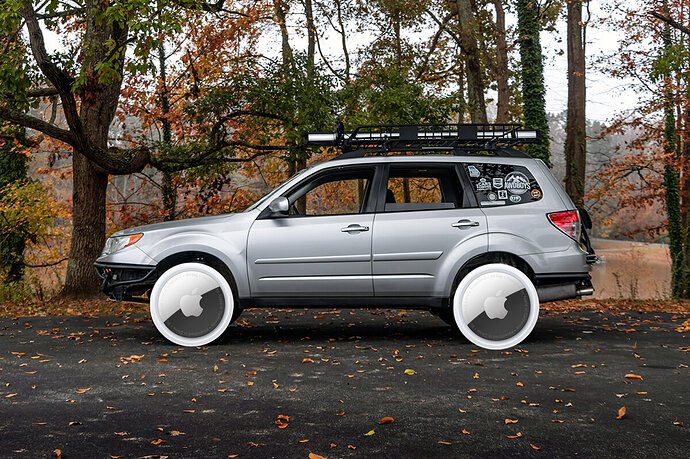 In the latest AirTag adventure where the device solves a real-world problem, Scotty from Chicago shared the story about how his Subaru was stolen. After the police couldn’t do much, Scotty remembered he had hidden an AirTag in his vehicle. Here’s how...

Regarding passwords,… I find the Passwords function in iOS Settings useful at times. Just needs a fingerprint (iPhone 8) or passcode to activate to see all of the passwords that Safari and some other apps have used. It also gives warnings about duplicated or weak passwords. I realise this has been covered in previous Tidbits articles and Take Control but it is worth reminding people they do not need to write passwords on bits of paper.

I remember a long time ago when Apple first implemented Find My iPhone back a decade ago.

I had returned from shopping and suddenly realized my iPhone wasn’t on me. Panicking, I called the stores I visited, but none had a iPhone returned. As a last desperate attempt, I used the Find My Phone on my Mac, and tracked my phone to the grocery store where I shopped.

I took my MacBook Pro to the store and tried to get a WiFi signal. At that time, WiFi wasn’t as universal, but there was a Starbucks next door, and If I stood in one corner of the store, I could connect to that Starbucks’ WiFi.

Pinging my phone revealed it to be on the top shelf on one of the aisle. I must have put it done to reach for an item on that shelf.

I remember reading that year about stories of people who tracked down their iPhones and stolen backpacks via Find My Phone. It seemed like amazing technology.

Where the damn thing could really be useful is the damn TV remote. It’s too damn thin and misplacable. Why that isn’t part of the Find My network is beyond me.

I misplaced it this week and couldn’t find it. I ended up ordering a new Siri remote, an AirTag, and that Elago R5 case you once featured. to end this issue once and for all. Of course, now that I have a new Siri Remote, I found the old one.

I recommended a friend get 1Password to store all of her passwords. A few weeks later, she called me up. She couldn’t remember her 1Password password.

Since then, I’ve been using my 1Password to store the passwords of the other people I recommended to use 1Password.

My first real use for Find My and recovering an iPhone was early on, when most were not aware of it. We had been on a rural road locally, stopped at a roadworks for quite a while, so much so I got out of the car and had a look. That must have been the point my iPhone fell out of the car. Anyway we were moved on and about five minutes later I was going to make a call and noticed my iPhone was not with me. I figured it must have been at the roadworks and drove back.

We arrived and the truck with the workers was heading off, I approached one guy as he entered the truck, asked if they’d spotted the phone, he shrugged and left. Rather despondently I resumed searching the side of the road.

I then recalled Find My. My wife had her phone, set up a hotspot, I lugged out my iPad and joined it and went hunting for my iPhone. The iPad showed it nearby and moving. She drove, I giving directions as the iPhone moved around. Sure enough we found ourselves following the truck. They pulled over at their depot. I went up and asked again, saying I could track it to the truck, again they shrugged. I pinged the phone, the loud dinging came from a jacket hanging in the truck. “Oh that? Didn’t know that was a phone…”

Sheepish handover complete, we drove off.

Yeah…me too. My wife still uses Password Wallet since she doesn’t want any auto fill in…I’ve tried to convince her it’s safe since the certificate gets verified but she doesn’t want to be confused by the facts. We each have our master passwords in the other’s vault…and our son also has them, as well as all of our device passwords including the admin accounts.

I have a story to illustrate Adam’s point about sequential passcodes. We used to have an Amazon Fire TV which made purchases way too easy. After my then two-year-old accidentally purchased a few things, I set a simple “1234” purchase passcode to prevent that. I made it simple because I didn’t want it to make legitimate purchases a big hassle. Flash forward a couple of years and I found my then four-year-old buying stuff because he had figured out the 1234 passcode.

The lesson: if a four-year-old can figure out a 1234 passcode, anyone can.

Yeah…me too. My wife still uses Password Wallet since she doesn’t want any auto fill in

1Password’s auto fill has saved my butt multiple times. If it wasn’t for auto fill, I would be unable to sit.

There are many times when I get what I believe is a legitimate email only to realize it was a clever phishing attack when 1Password didn’t automatically log me in. I caught a company wide attack this way. A fake email from our what was supposed to be our tech support team had asked us to relogin to our corporate website because they had reset the servers. About a dozen people at my work fell for it — including one of the people on the tech support team.

I tell people that auto login is an important security feature if done correctly (and a dangerous security failure if done incorrectly). Thankfully 1Password does it correctly.

But inquiring minds insist on knowing: What kind of pie?

Has to be Apple, of course!

Adam, you are a class act! You told the tale beautifully… good thoughts, humor, and writing. Thank you.

Long ago (birth of the Mac year, 1984), I bought a house in the hills south of San Jose. Home security was in its infancy, and I probably didn’t need it, but I was impressed by a locally engineered (all wired, hand built circuit boards, etc.) system. The owners of the company wanted its customers to take a gun safety course and procure licensed handguns to bolster their protection. The cost to wire a large already built home was pretty high, but I did it anyway. The company’s president was just this side of paranoid. For example, he had already envisioned the scenario where a homeowner would come home, be accosted by someone hiding in the bushes who would demand he/she unlock the door, and when the wall mounted keypad beeped to announce the need to disarm, if the perp demanded the homeowner shut it off, there was a “secret code” the homeowner could use that would simultaneously silence the entry warning but also alert the monitoring station of a hostage situation in progress (that secret code just incremented the final digit of the usual code by 1).

We had a few little niggles after initial installation, so the security company owner came to our house to scope them out. At our front entrance, he had me disarm the system, then re-arm it, then he asked me for our security code so he could re-arm and test a few things (all the time trying to tell us why we needed hidden handguns in the house.

I could almost feel his heart break when I responded to his query about the entry code: “I,2,3,4,5,” I responded.

I’m also a big fan of the AirTags. Just yesterday, they found my brand new iPad Pro (in our own car), my Apple watch, and my wife’s iPhone. Implementation of the AirPods Pro is a bit sketchy, but I think I’ve read that’s going to be improved.

I am nervous about using common sense to track down something stolen, however. Making a perp’s shirt pocket beep while he’s surrounded by his own buddies has so many ways to get ugly in a hurry…

At times I am reminded I live on the other side of the Atlantic. These are not considerations here. You make a good point.

When I lived in Brooklyn one day coming home from work, I intervened in a robbery and got the goods back to the victim, went home and told my American wife, she blew up, what was I thinking, it hadn’t occurred to me that I might have placed myself in serious danger.

At times I am reminded I live on the other side of the Atlantic. These are not considerations here

I think this is far more a matter of a specific location than nationality.

There are plenty of places in the US (but not in a big city) where you could do the exact same thing you did. And there are many big cities in Europe where it could be just as dangerous as New York.

Yes, cities are cities everywhere but nonetheless gun ownership is not the same here as in the US. The awareness difference is what I was referring to.

But inquiring minds insist on knowing: What kind of pie?

With apples from her trees. But apparently she’s planning pies of other flavors for the future too.

What a terrific story! Thank you for sharing it. And I will add that my husband and I use the Find My app to locate each other more often than our devices! Whenever one of us is on the road, we can track each other via Find My when needed. This is especially helpful in inclement weather. And we’ve used it to help a friend navigate a different route when driving to help her avoid closed and iced roads.

As for passwords: We have the 1Password Families plan and we can’t live without it!

Yes, we use Find My for all the family members, it was a great solace when our boy was thousands of miles away, and it is handy to see when to get dinner moving if I can see she is on her way home. On the other hand I’m quite sure our other son had alerts for when my wife and I were near the house, TV off, essay open…