It has been a decade since Apple co-founder and CEO Steve Jobs died. Apple commemorated the occasion on 5 October 2021 with a brief video on its homepage that it has now posted on YouTube.

I still remember the day. My wife had stayed up and heard the news when it broke and I was asleep. The next morning when I awoke and started to rise to make coffee she put her hand on my chest, stopping me, and said “I’m really sorry, Steve Jobs passed away last night, I heard on Twitter.”

It landed on me, surprising me as it did, I went up to the kitchen and searched online reading news pieces, then turned to Twit Live, the stream from Leo Laporte. It was probably midnight in California, I don’t know which host was on but someone was taking calls and folks were calling in with their stories.

This guy, a regular guy who had a computer repair business, said that how he had grown up and where he had grown up, meant working in the plant or not working and that Apple had given him the opportunity to define his own work and it be interesting and rewarding, that he had raised his family with the income from his business starting from his first Mac back in the day. The gratitude was palpable, I still recall his blunt honesty about how he felt. 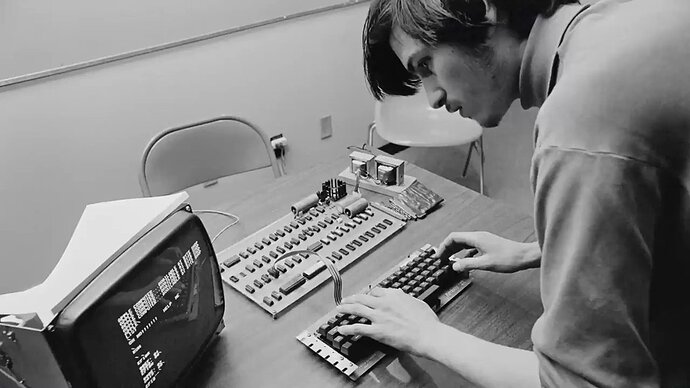 Just to be a contrarian here…

There’s no doubt that Jobs was a visionary. However, I do wonder if Jobs may have died just in time to best preserve his legacy.

Apple was stalling in 2010. Android was out, and Samsung became a better selling phone. Meanwhile, Jobs was doubling down on skeuomorphic design while the overall design of the iPhone was getting discombobulated. It seemed that the reel to reel look of the podcast app was more important than how usable it was.

Once Jobs was gone, the iPhone interface was reworked. Skeuomorphic design was eliminated. Control over the OS was loosened. Design elements from Android were borrowed. The iPhone grew in size. Multiple models were introduced. There are now eight different models you can buy. How much of this would Steve approve?

There are times when visionaries get in the way of their company. Ford almost went bankrupt because Henry Ford refused to replace the Model-T. Edison was pushed out of control of Edison Electric because he wouldn’t consider AC power, Edison Phonograph couldn’t compete against Victrola. Edison Moving Pictures lost out to Hollywood.

Jobs’ vision was needed to create the iPhone and iPad, and they grew beyond his vision.

How much of this would Steve approve?

I wish less of it would have been approved, actually.

I miss Steve’s focus as well as his willingness and ability to get involved in the actual product. Show me another Fortune 50 CEO that does that and does it as well as Steve did.

There’s no doubt that Jobs was a visionary. However, I do wonder if Jobs may have died just in time to best preserve his legacy.

I’ve had similar thoughts. He was looking into things like touch screens, voice control, and all-in-one computers in the early '80s. The iPad was the culmination of his vision. His work on this earth may simply have been done.

A keyboard and trackball free iPhone debuted in 2007, and it was a totally, completely, 100% touchscreen, revolutionary interface design that was completely unique among mobile phones. From that moment in time, Steve Jobs really did change the world of telecommunications. And Steve worked in tandem with Jony Ives on iPhone and Mac interface design. To date, the interface that Jobs and Ives developed is still the industry standard starting point for mobile phones. And although I was carrying on like a banshee here on Tidbits Talk that Jobs would probably destroy Apple if he enters an already super saturated market, the minute I saw iPone’s revolution design and interface, I was totally floored. And I did very willingly eat crow about iPhone and its somewhat skeuomorphic interface. And in tandem, there was the introduction of the App Store. And not long after, iPhones with Retina Displays and and for the time, really good cameras. The somewhat skeuomorphic made it easy for new users to quickly locate and and access whatever stuff they wanted to.

The somewhat skeuomorphic design of the original Mac interface was truly revolutionary as well. At a time when personal computers were becoming standard on desktops, being ably to quickly locate and access applications, documents and projects was a tremendous selling point in a DOS driven world. Yes, the stupid leather and bookcase design were examples of bad skeuomorphic design and deservedly were the subject of ridicule, they did not linger for long.

And don’t forget how somewhat skeuomorphic design made 1984 not be like 1984.

I miss Steve’s focus as well as his willingness and ability to get involved in the actual product. Show me another Fortune 50 CEO that does that and does it as well as Steve did.

Tim Cook. And although I do not like anything about Facebook and/or Mark Zuckerberg, he does meet that standard. Sunder Pichai of Alphabet is another good example. Though Jeff Bezos did recently back away from Amazon, he’s earned a place on this list.

Tim Cook. And although I do not like anything about Facebook and/or Mark Zuckerberg, he does meet that standard. Sunder Pichai of Alphabet is another good example. Though Jeff Bezos did recently back away from Amazon, he’s earned a place on this list.

I must respectfully disagree. Tim Cook is a process genius and a bean counter. He is not a product guy. Steve Jobs presented new products himself. Cook never does. Tim Cook was taught by steve the importance of reading customer e-mails.

I still use Google Fi but dumped Google Voice due to lack of any meaningful support. And i used YouTube since there is no viable alternative.

Bezos was a genius and very involved in product until he got super rich and faced a midlife crisis, cheated on his wife, then divorced her and traded up to a new, younger and more attractive partner.

Of the three you mention, only Bezos was, like Jobs, the founder of his company. Only Bezos can be said to have changed the world in a revolution of new retail paradigms.

Bezos was wise to step away from Amazon and retire to the board. Amazon is another virtual monopoly without viable competition and Bezos was probably bored with it.

All these companies are money machines and the management teams are all top notch. I am a stockholder in all three and as a stockholder I am very pleased with their financial performance.

But to compare Cook and Pinchi to Jobs? Not even close.

I agree that the design was revolutionary. Unlike most people, I know the Mac interface wasn’t anything like the Xerox Parc interface.

However, it was Jon Rubinstein who was head of design and software at Apple. He headed software and design. When Jobs died, he was replaced by Jonathan Ive who brought a new flat design astatic to the Mac and iPhone. Ive unified the iOS interface. It had actual layers. Sheets always went over the background.

When the Mac first came out, there was a disk that came with it to train users to click, double click and pull down menus. The iconography was important because it was never seen before.

I too would like a little more design control. The touch interface is getting overloaded. I’d like to see the iPad switch from a touch centric interface to a more Mac like interface when a keyboard and pointing device is added. Why not have a menubar and keyboard shortcuts? I feel that computer desktop interfaces are a bit too overloaded.

What’s the desktop for? It’s either packed with crap or barren like a desert. Should we use tags rather than folders as an organizing principle? A decade ago, it was a stupid question. Now people know what tags are.

I must respectfully disagree. Tim Cook is a process genius and a bean counter.

Just one counter example…Steve Jobs was never involved with the development of Apple Watch at all, and Steve had no involvement in Watch apps, services or any of the many health oriented scientific partnerships Watch is involved in, including Fitness+. Tim Cook Was not only successful in creating Watch, he changed the world with the many features and services Watch offers. 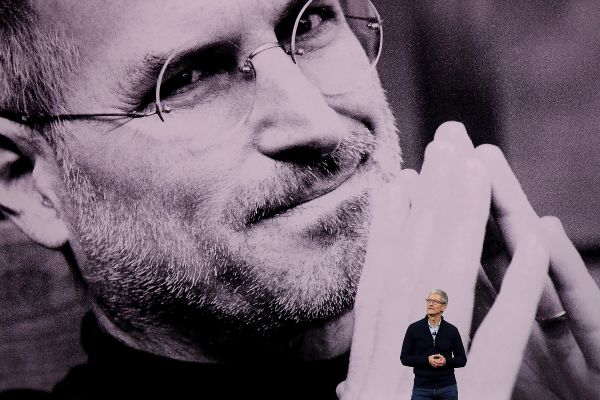 “We didn’t talk about watches… I don’t remember him wearing one either,” Apple’s design chief said of Steve Jobs.

Air Pods are another. And don’t forget Apple Pay, Apple credit card, Wallet and its new financial services stuff. There’s Apple News and News+. Though I’m personally not a gamer or a fan of Apple TV or TV+ and Arcade, these are totally Tim’s innovations. He also has kept expanding Music’s offerings, including services that benefit artists and producers.

Though not in so many words, Tim more or less told Intel to perform obscene acts upon themselves and their crummy chips. He was responsible for developing Apple’s own chips which are currently smoking the competition in terms of speed, battery power and longevity. He also accelerated Apple’s hardware and software development cycles. Though he worked closely with Steve on the development of iPhone, after Steve’s death he developed Face ID and other stuff, and also kept iPhone cameras ahead of the competition. He also developed the Mac Pro and Pro Display. He expanded the iPad line and developed iPhone SE.

Tim was also the first Fortune 500 CEO to publicly admit to being gay, and he’s very vocal about equal opportunity for all.

No other personal memories of Steve out there?

He replied to one of my emails. I had that. He spent it pointing out the error of my ways of course but I’ll not forget the shock of getting it.

One takeaway from Steve’s presentation style I took on was his overall approach to launching anything new.

The original iPhone launch took 80 minutes but was mesmerising with so many revolutionary features. Steve took the audience along with each reveal - brilliant!
There are many copies online. This one is OK: I like this take from Dr. Drang’s, which was made after Steve Jobs death, but reposted on Twitter on this 10th anniversary: Jobs was simply Right about the role of computing in human lives…

My favorite Steve Jobs moment is when he’s talking about how beautiful the new Mac iBook is, then picks up the iBook to show the audience the screen, and the audience suddenly realizing there’s no cord for the Internet on it. It was the introduction of WiFi.

Steve even took a hoop and passed it around the MacBook as if he’s doing a magic trick. You can see him grinning from ear to ear. He loved doing that and the audience’s reaction.

At that point in time, you knew everything was going to be okay at Apple.