Swollen Battery in MBP, how worried should I be

Two identical MBP (13" Retina Early 2015) have developed slightly swollen batteries. I noticed they would not stay plan/flat/flush (gosh what should I call this?) on a hard and even surface. Three months ago they were fine, now the entire case is slightly (!) swollen. It’s barely visible, but easy to notice that they “wobble” a little on the desk.

On shows 0 charging cycles, the other has an almighty 2 cycles, both are six years old.
They were only ever used on mains power. Both are not covered by Apple’s repair program for swollen batteries in this model range.

How worried should I be that the swelling increases to a degree that leaves the MBP unusable? We do have valid and good backups.

I think you should disconnect the Macs from the mains and have the batteries replaced as soon as practicable. Swollen batteries are usually caused by build-up of gas inside the battery cells. The packaging usually holds up and does not explode, but I do not think it prudent to take the chances.

This happened to my 2016 15" MacBook Pro a few years ago; the battery swelled so much in a short time that the bottom case popped out. I had an AASP replace the battery immediately and nothing worse happened beyond that (well, except for the stuck keys I guess).

Ironically, never cycling the battery or keeping it past 80% charged for prolonged periods may increase the chances of premature battery aging and swelling.

I second @chengengaun’s comment. I’ve had a swollen battery in a 15" MBP myself. Twice. It wasn’t fun.

There’s two issues: one is imminent hazard to you or anybody else handling your MBP. These batteries store a tremendous amount of energy in a very small volume. They contain hazardous chemicals that can burn and corrode. You probably also don’t want to leave such a battery unattended for longer periods of time in your house, office, or car. You wouldn’t be the first person to have their house burn down after a Li-ion runaway fire. Search for FAA and Li-ion batteries on YouTube to get an impressive impression of just how violent these batteries can go and how hard it is to contain them once the are on fire. Bottom line, you can’t put out that fire with water or sand. The best you usually can do is cool it (you need lots of water or ice on hand) to prevent further damage while it consumes itself, which can easily take an hour or more.

But even if you were willing to disregard that risk, there’s also significant risk to your MBP’s components due to the force applied by the swelling battery even without fire or corrosive leak. In my 15" MBP, the first time around the swelling of the battery killed the trackpad, the second time it warped the lower case so badly that it had to be replaced and in the process Apple also swapped the board because their techs claimed the board had become warped due to the expanding battery.

If you have good backups, remove the MBP from power, store it in a safe location, and get a qualified tech to swap its battery ASAP with an appropriate replacement. Otherwise, make sure they remove the battery and it is properly disposed. Even if you’re willing to give up using that MBP, you don’t want it injuring you or burning down your house.

As advised above, get those batteries out as soon as you can, since they could damage the computers - the swelling could do mechanical damage, and if they burst, I suspect the stuff inside is pretty corrosive.

A few years ago I replaced the battery in a MBAir. I got a replacement online for a reasonable price, which came with the necessary tools, and I, who’s not a tech guy, could do the job myself easily and quickly, and it was fine. Just make sure it’s made/sold by a reputable company. I forget where I got mine, but if I were in the US I’d probably trust OWC.

Unfortunately, the batteries in a 2015 MBP are glued down. So it will take a while, and you must be careful when removing them. See iFixit instructions.

That having been said, iFixit sells a battery kit that includes all the tools you need for $80 (or just the battery for $72).

For comparison, Apple charges $200 for an out-of-warranty battery replacement. Do you think $128 is a reasonable cost for the labor? That’s a question only you can answer.

Of course, you may also be able to find an independent repair shop that can install an aftermarket battery (like the ones sold by iFixit and OWC) for a lower price.

A few years ago I replaced the battery in a MBAir. I got a replacement online for a reasonable price, which came with the necessary tools, and I, who’s not a tech guy, could do the job myself easily and quickly, and it was fine.

The battery in an Air is far far easier to replace than in an MBP. Earlier models don’t use any glue, and later models use quick-release adhesive strips. In contrast, to remove the battery from an MBP requires solvent and plastic cards to separate the battery from the case.

Many thanks for very useful answers.
My role in this case is to give the user some advice. I don’t feel like carrying out a battery replacement myself. For this model, because of the glued in batteries, its’s too much effort, but I felt I should inform the user correctly.

Here in the UK Apple charges for this model’s battery replacement £199 = $235, quite stiff. Independent repairers exist as well.

I’ve replaced glued in batteries a couple of times. I suggest you watch a video at iFixit or OWC. I didn’t find it as hard as it sounded.

You use a solvent (my kits came with what I suspect was acetone based on the odor, but weren’t labeled with the actual chemical) and slide the card underneath and gradually free it up.

It’s certainly ok to have someone else do it, but it’s really not as hard as it may sound.

If you don’t want to do it yourself (detailed instructions pasted below; yes, it is involved) and Apple is too expensive, you should definitely investigate options with authorized Apple repair sites. Just don’t do nothing. Or if you do, at least make sure the MBP is stored away from people and structures. 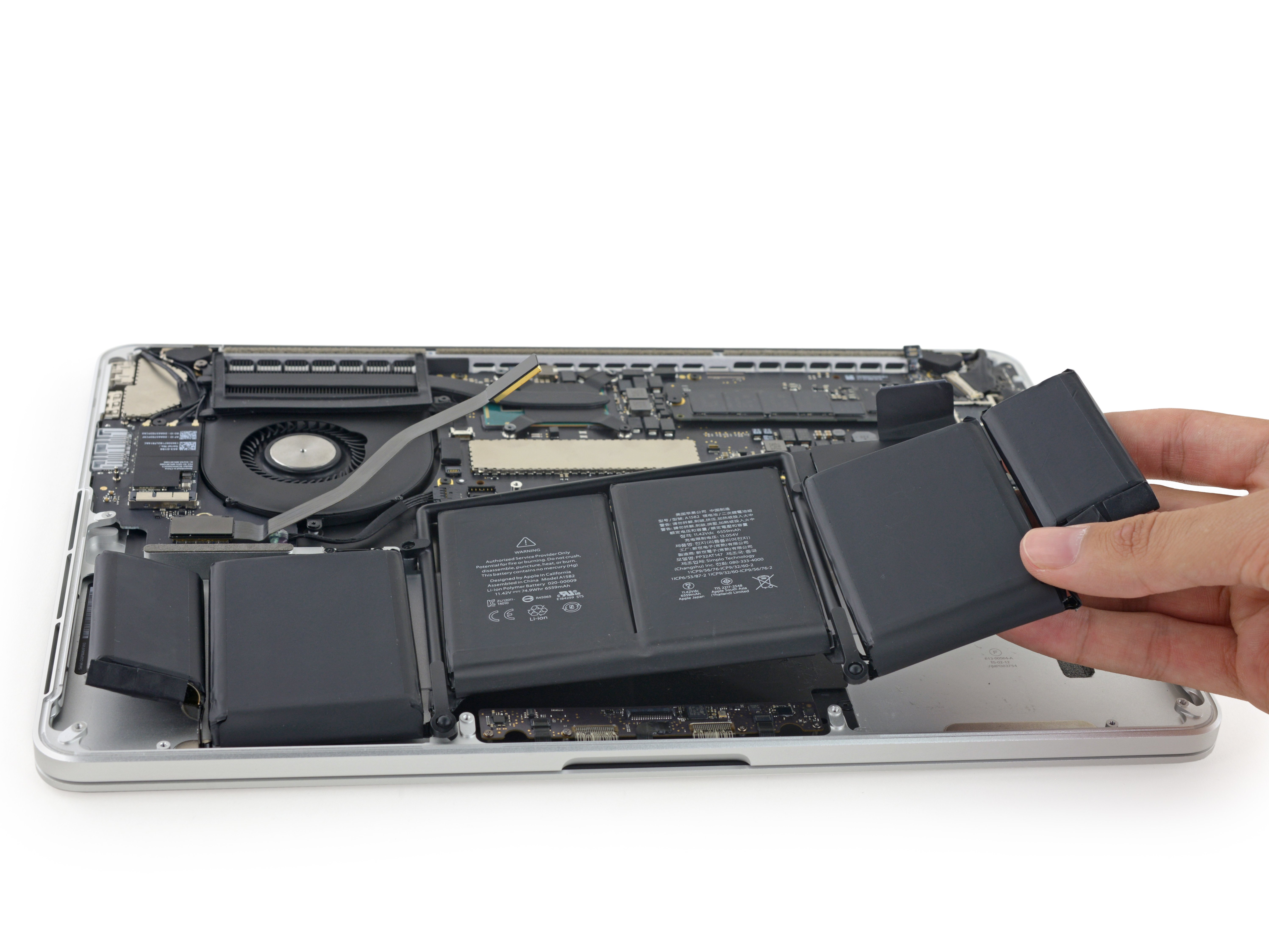 Replace the battery in your MacBook Pro 13" Retina Display Early 2015.

You use a solvent (my kits came with what I suspect was acetone based on the odor, but weren’t labeled with the actual chemical) and slide the card underneath and gradually free it up.

The iFixit kit includes an acetone-based solvent. They include goggles (to protect against splashes) and gloves (in case your skin is sensitive).

How much prying is involved when the solvent is used? The still pictures don’t say.

I wouldn’t say I had to do anything as forceful as prying. I liberally dripped in the acetone along an edge, waited, and wiggled the plastic card in a little at a time, adding acetone whenever it felt particularly stuck. I just gradually worked my way through it a little at a time. It felt more like sliding the card through the adhesive between the case and the battery than as if I were prying the battery off.

I don’t want to encourage someone to do something they’re not comfortable with, but I really didn’t find as difficult or onerous as I’d expected.

Just curious – once you replaced the swollen battery, how did you dispose of it?

I assume it can’t just be put into the regular trash?

I’ve had this happen on two different machines (both MBP 2015s). One was replaced at our cost, one was done free of charge. There is a replacement program for this model but it’s clearly specific to certain serial numbers.

Regardless of the cost, it needs to be done as it could be a serious issue (total machine loss) if it’s left unresolved.

I took it to a local electronics recycling location that handles old computers, laptops, TVs and other electronics.

Just curious – once you replaced the swollen battery, how did you dispose of it?

We had this happen with Tonya’s 11-inch MacBook Air, which was suddenly incapable of closing because the battery had bent the case so much

Luckily, it was easy to open that Mac and remove the battery, which I then put in an old frypan on the concrete deck. Where it stayed for an embarrassingly long time until I took it to the county electronics recycling center, which was equipped to handle such batteries. 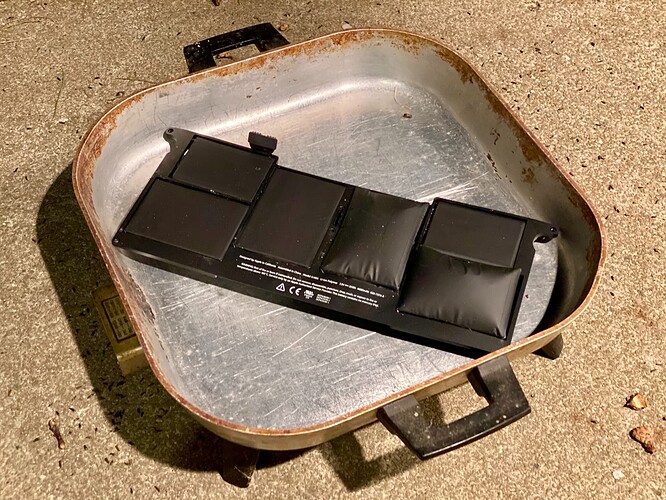 Be sure to deplete the battery to 0% charge. That can be done by unplugging mains and letting the computer run until it shuts off. That will nearly eliminate the chance of fire. It will also be much safer during battery removal in the off chance the battery gets punctured. A dead battery does not have the stored energy for thermal runaway.

When my 2012 MBP developed swollen batteries, it had no battery capacity. When I unplugged the MBP from mains power, it would immediately go off, just like a desktop!

This is the second time I’ve replaced the battery in this laptop. I got mine from OWC (MacSales.com)

When I did my drone pilot’s licence there was a lot of discussion of LiPo batteries and what to do in the event of thermal runaway. Lithium is an alkali metal so will react with water and or oxygen causing combustion.

First thing is let it burn out. Then you monitor it for 15 minutes. Once that’s done, 24 hours in a ‘fireproof’ place such as Adam’s done above. The final step is soaking for two weeks in salt water. Once that’s done, dispose of through appropriate channels.

The last time I had to get rid of a battery, I took it to the Apple Store for recycling.

If you choose to drop it off at an Apple Store (or at Staples), call first. They may not want to accept (or may want special handling for) a bulging battery.

It would have been an understatement to say my battery was bulging. It was one of the removable ones which I had replaced because one of the cells had gone bad. While I kept thinking I should take it in for recycling, it sat on a bookshelf for an embarrassingly long time. One day I noticed it had come apart, and it was probably about 3" or 4" thick. That finally got me to stop procrastinating and take it in for recycling.

Best Buy also claims to accept laptop batteries for recycling on its website, but the last time I took one to the local store along with some other electronics, they said they didn’t accept batteries. It annoyed me a bit because at the time, Best Buy touted its recycling efforts on its website and prominently claimed it was the place to bring your old laptop batteries into.