Thanks Dave
No error messages all proceeds as normal but no file is saved.
I will try creating a new profile and logging in via another user.
I did try permissions they include a diagnostic app with it and it checks for permissions and all seems well.
Ill let you know if progress Simon

Made a new Profile - no change

Also try doing a full uninstall and reinstall after you use disk utility to fix permissions and so on.

I was about to update Manager (using Sierra), but I received a warning that CardMinder and ScanSnap Receipt will no longer work. Do other users have good substitutes for those programs? Otherwise, does ScanSnap Home have good replacements?

CardMinder and ScanSnap Receipt will no longer work.

I see that you got no replies. Sorry, I don’t use those features. I just stick my receipts in folders on my disk. I almost never have to fetch them; it’s more of an emergency practice, such as if I have a warranty claim or if I get a tax audit. I forget what CardMinder does.

Here’s a report from the field.

I support a client who who has long been Fujitsu scanner user, including through Fujitsu’s surprise abandonment of ScanSnap Manager in favor of ScanSnap Home. The recent return of SnapScan Manager came as good news.

This August I was tasked with scanning many estate-related documents and pictures at a location 95 miles from my office. I bought an iX1500 and downloaded ScanSnap Manager to my Office Catalina system with good results. I then installed ScanSnap Manager on a 2017 MacBook Pro (my Big Sur Beta test machine). Scanning was done at a remote site where my iPhone hotspot provided wireless connectivity. I scanned a few hundred pictures and dozens of documents with no problems. I can recommend this solution.

I have not tested the PDF software included, since I have Adobe’s Creative Suite on my office machine.

I bought an iX1500 and downloaded ScanSnap Manager to my Office Catalina system with good results. I then installed ScanSnap Manager on a 2017 MacBook Pro (my Big Sur Beta test machine). Scanning was done at a remote site where my iPhone hotspot provided wireless connectivity.

Great empirical data! Thanks for sharing! And what a great portable solution.

Please read list of missing feature on ScanSnap mfg pages.
For me missing Scan to Email, and many more that might be more important to others. The support for older scanners is missing too.
Unless ScanSnap updates the Manager and all other software it will be the end of Fujitsu. Their prices are unreasonable too.

Please read list of missing feature on ScanSnap mfg pages.
For me missing Scan to Email, and many more that might be more important to others. The support for older scanners is missing too.

I’m not sure what you are referring to?

The updated ScanSnap Manager supports Scan To Email as well as older scanners.

What are you referring to?

It was to go to the follow who wondered what was missing from Home vs older Manager basedd ScanSnap. That person was too lazy to read the list of items eliminated in Home.
Sorry fro missdialing.

ScanSnap Manager has been updated for macOS Big Sur, further suggesting Fujitsu is committed to maintaining their Old Faithful software.

They appear to have added or resurrected some functionality, too. Here are the release notes and link for more details:

I was notified about this automatically on my Mac via ScanSnap Online Update. If that doesn’t happen for you, I’m sure you can check for the update manually, or just fetch it online.

I also have the older ScanSnap fi-5110EOX/M (shout out to Simon) and tried using Scansnap v7 under Mojave to get ready for move to M1 Mac but didn’t have good results.

Scansnap manager gives me a notification that the fi-5110EOX/M is ready to scan, scan starts, scansnap manager looks like it is processing scan and then quits / crashes and no scan is saved.

Has anyone been able to use Scansnap Manager v7 w/ fi-5110EOX/M?

Anyone else having problems with Scansnap Manager v7 crashing on Mojave?

Has anyone been able to use Scansnap Manager v7 w/ fi-5110EOX/M?

Do you have reason to believe that it is supported?

Scansnap manager usually supports older models (even if not shown in compatability list) and it sure looks like it recognizes the scanner. 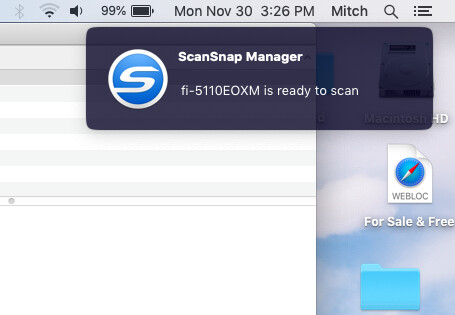 For now I’ve given up trying to get my old (fi-5110EOXM) scansnap to work with new software.

I pulled a real old Macbook out of the closet and set it up to accept scans from scansnap and run my 32-bit billing software.

Having scans go to iCloud folder makes it super simple to get them from my main Mac.

Using the built in Screen Sharing tool makes it easy to control the lid-closed laptop.

Now if Apple would just deliver my M1 Mac Mini…

I am using an old fi-5110EOXM (pages 34,820), with ExactScan Pro after Catalina upgrade.
I Just tried ScanManager V7 and i confirm the crash of the app…

Thanks for duplicating the crash. I’ve been wondering if I could switch to the new software with my fi-5110EOXM, but I guess not.

I too am using ExactScan, which isn’t quite as convenient, but darn close.

Hello, am I the only one that cannot reach the download page (and haven’t been able to for some time?).

nor any of the pages for the actual software downloads?

Greetings. I was able to reach the page, download the software installer, and use it to download and install the actual software including manuals for my S1500M.

Here is the link I used. It will bring you to a page of thumbnails and buttons for all the eligible models.

It looks like that’s the same link you are using, but you should be seeing this result: 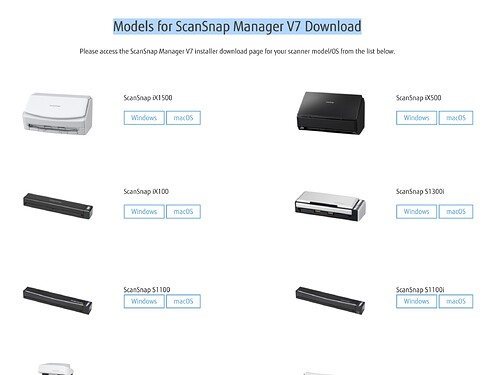 My results came from Safari v14.0.2 under Catalina. If you aren’t able to get there, make sure that your privacy settings on MacOS or other software are not blocking the page.

Aaand…after discovering the power adapter for my S1500M was no longer functional on Thursday, a new one arrived today (Saturday) from Amazon, and I’m in business.

Fujitsu appears to be in full development/restoration mode with ScanSnap Manager. The version I downloaded was labeled 7.1 L25, and for the most part looks like a modern version of the manager that was in the box when I purchased my scanner in 2011.

It’s also got more useful information on it. I recall having to unplug the scanner and look at the back or the bottom to pull a serial number from it. Now there’s a “ScanSnap Information…” menu item that pulls up an information box: 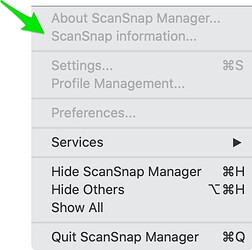 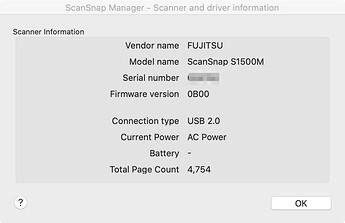 After reading previous comments on earlier versions, I was really impressed to find this home screen: 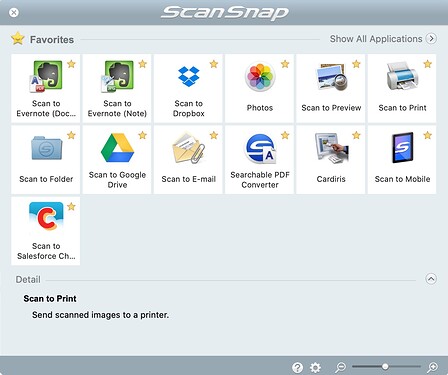 I’ve selected all of the possible destinations for this screenshot. I’ve also included “Scan to Preview,” which is a destination I added myself. CardIris is not included, though it shows up on the screen. But OCR is because the venerable ABBYY FineReader text engine is still part of the ScanSnap Manager.

The SSM (okay, I got tired of typing “ScanSnap Manager”) includes a conduit for “Scan to Mobile.” I haven’t tried it, but it appears to pair a desktop computer with a ScanSnap tethered, to a mobile device so documents can be shared. If I’m reading the information box correctly, this would allow secure document sharing to a device that has the “Connect” app installed. 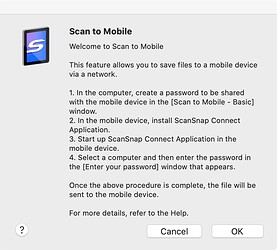 I’m not missing much (if anything) from older versions of the SSM software. It’s also worth noting that I’d been using an Epson Workforce all-in-one printer to scan documents while my ScanSnap was out of service. I got used to a slowish scan, and waiting for two-sided documents to work their way through the recirculating document feeder, then for scans to transmit through the network and up to Evernote’s server, then back down to my computer. It was not intolerably slow, and it worked okay.

But watching my S1500M ingest a 20-sheet, two-sided document in less than a minute and having that document go basically wherever I want to use it on my desktop—and having it be searchable in another click and a 30 second wait for recognition—reminded me why this is such a great productivity tool. It just doesn’t ever seem to get in the way of what I want to do, and all I have to do is flip open the cover when I want to scan.

If you’ve got one of the supported ScanSnap models languishing in a closet, I’d recommend dusting it off and putting it back to work.