As before, the Mojave security update is hidden beneath the Big Sur nag: 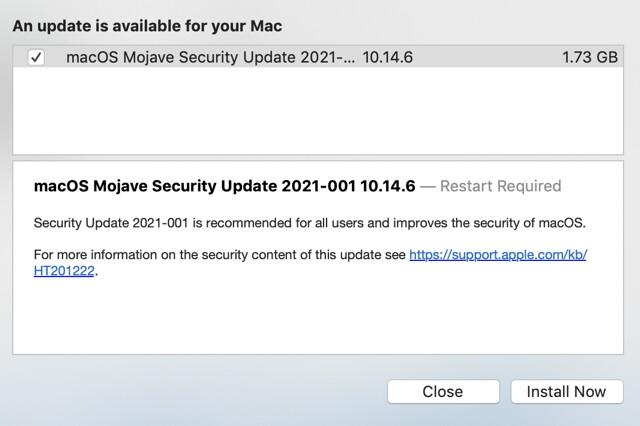 Supporting many macOS users at work, we typically script it so the users are not thrown by the System Preferences → Software Update option to install Big Sur. Some of my users are MDM managed so we can successfully hide the Big Sur update by ignoring it. But for those who are not MDM managed, you cannot hide it. To avoid accidentally installing a major macOS release you can start the updates from the Terminal.

That will install all updates and reboot. That’s a command we push out to our managed Macs along with a script that warns them and allows them to defer the updates till later. But I use it on my home Macs via SSH.

Having just read about bugs with sudo and, separately, softwareupdate, I had to smile when I saw this idea. ―Ken

There’s now a standalone update for Security Update 2021-001 (Catalina). Nothing for Mojave yet.

The Safari update may have fixed an intermittent freeze when I tried to File/Save a PDF web page but the option to open that page in Preview (right click on the page) seems to have vanished. Win some - lose some!

This appears to be the current stable release from its maintainers: Sudo Stable Release

And Mojave (after the security update) is running the 1.9.5p2 version as well.

I’m having a heck of a time with this Security Update. MacPro5,1 running Mojave 10.14.6, with a Metal (but non-boot-screen capable) graphics card - the update runs but then the machine just hangs after the reboot. I’ve left it for several hours, and when I turn it off, it won’t boot into any state except the Recovery Console, at which point the only thing I’ve found that works is to Reinstall macOS.

I’ve tried running the Security Update from System Preferences as well as from the standalone installer, and at this point, I’m reinstalling the OS for a second time, and thinking I may just install the supplemental update and Safari 14.0.3 and leave the security update out of it - although I really don’t want to.

The only other thing I can think of that I haven’t tried is doing a Safe Boot and trying the Security Update install from there.