OK. This is truly a minor thing I noticed in my new MBP M1 Pro 14 inch that arrived yesterday. Look at the lighting under the keys when viewed at an angle. Because all the keys must not be at the same height or something the light leaking out is uneven.

Please reassure me that I am being overly picky here.

Is this what others see as well?

I basically love my new MBP! 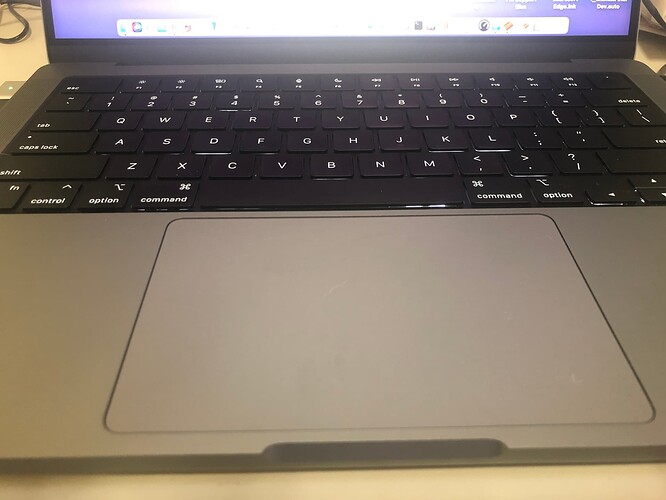 Doug, I don’t think you’re being picky, or overly picky here. I haven’t seen light under keys like that before. And this is in MacBooks and Pros as well as in freestanding keyboards.

Yes, it appears so on my 14” as well. I think the leak is even more visible because of the black keyboard well.

That must be the reason.

For some reason it is distracting. I don’t know why. It’s not that much different than on my old MacBook Pro. I even turned off the keyboard light for a while.

Maybe Apple wants us to sit up straight. You only notice it if you’re leaning back.

It’s a little niggling thing, that for some reason I’m finding distracting. I wonder if this will become a thing and Apple will make adjustments at some point.

Doug, I don’t think you’re being picky, or overly picky here. I haven’t seen light under keys like that before. And this is in MacBooks and Pros as well as in freestanding keyboards.

I’m not sure what you mean when you say you have never seen that before and it seems to be everywhere. Can you clarify? thanks.

I don’t usually use keyboard backlighting, but if I did, I don’t think it would particularly bother me.

I can also tell you that this was no different on my most recent 2020 Intel 13" MBP. So it’s not the new black keyboard well causing it.

But this keyboard has seen many iterations since our 2013 MBPs so such a change is not surprising. It’s perhaps not super pleasing esthetically, but since I have to go out of my way to actually see it, it’s not something that really bothers me (unlike the missed touchpad taps).

I will say that this is probably one of the best notebook keyboards I have ever used. It feels great, it sounds great, and my typing accuracy on it is excellent.

Here is an update! I was just on the phone with Apple Support for 1 hr 20 minutes. I basically just want to know if this is “just the way it is” or irregular. If it’s just the way it is I’ll probably just keep it because otherwise I like it very much.

The first support person I spoke with was English support (I live in Tokyo, he was in Australia I think). He had me upload the photo. He conferred with some people and they were of the opinion that it was irregular.

Then he passed me on to Japanese support here. The first person explained to me my options: have it exchanged (would take a month to wait for a new one) or since I just got it I have until 11/21 to return it.

But I wanted to be sure it really was irregular because so far online I haven’t heard from even one person who isn’t seeing the same thing.

The last person received my extra photos and he’s going to discuss it with engineering there and get back to me when he has info.

I’ll let you know what I find out. In the meantime, I’ll decide if I’ll just keep it or not if that’s the way it is. If that’s just the way it is for everybody, I’m leaning towards keeping it.

There is some light leaking, but I don’t think it’s a big deal for 2 reasons:

It’s true if I raise my angle by about 10 degrees the light leakage goes away. I think the key that bothers me the most is the space bar because there is more leakage on the right side than the left, meaning the key must be crooked.

I can see the keys ok with the light turned off. I may do that if I don’t just get used to it.

Not sure if the irregularity is caused by the slight play in the keys. The new Magic Keyboard keys wobble much less than the pre-2016 scissor switch keys, but there is still some play. Ironically, Apple claimed to have solved this wobbling issue with the butterfly switches. They might but I think the new problems were not worth it!

Now that it’s 7pm here and as I sit leaned back, I am also noticing the leak. Not too bad in my case though.

At this point with all my new backups and updates and getting applications like Google Drive to work properly on the new MBP it’s probably too much trouble to revert anyway.

Are you saying yours looks different from mine? Of course it depends on the angle and level of brightness. I can sit straighter by 10 degrees and the leakage disappears.

It’s 8 pm here. Where are you located?

The leakage in my case is pretty consistent (every key leaks the same way, for better or worse): 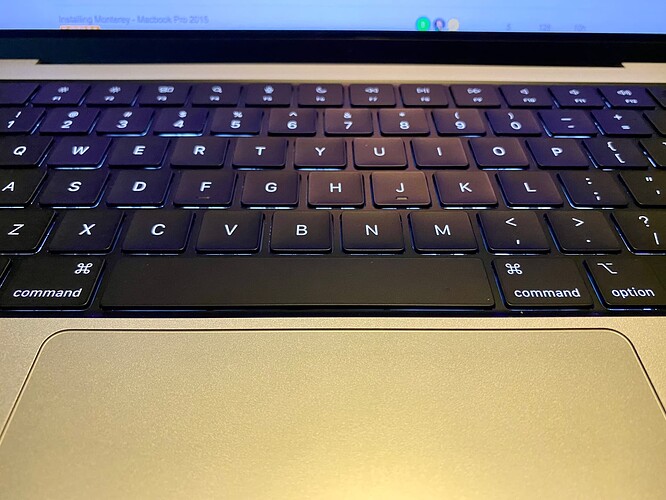 As comparison, the iPad Magic Keyboard also leaks, but seems better probably due to the lower key travel: 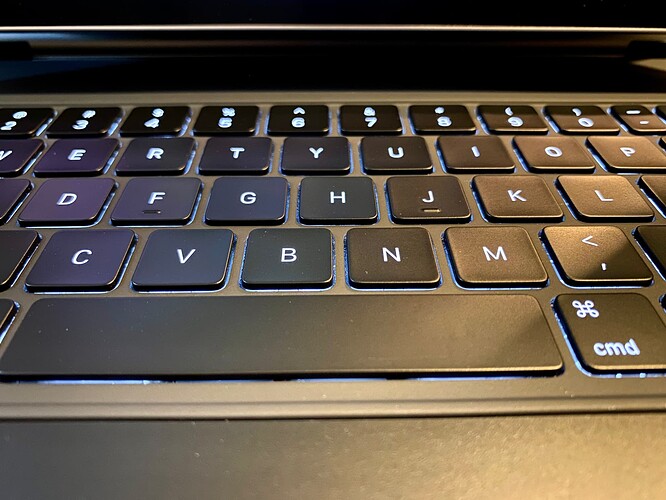 I’m based in Singapore, so I am one hour behind.

In your second photo I see your space key leakage is uneven, like in mine.

Is it only Apple with this issue?

Meanwhile I got an email at 2:40 am (!) saying Apple tried to reach me but I didn’t answer. And there were no calls.

Is this what others see as well?

Seems the same on my 16" Max and it similar to other Macs. Doesn’t bother me, but then I rarely type in the dark. I mainly like that the letters themselves glow and I don’t worry about leakage around the keys.

Seems the same on my 16" Max and it similar to other Macs. Doesn’t bother me, but then I rarely type in the dark. I mainly like that the letters themselves glow and I don’t worry about leakage around the keys.

I guess it’s not the leakage itself that bothers me. It’s the random, non-uniform leakage that makes me feel the keys were haphazardly assembled. Especially the space bar where the leakage is different on the left and right side.

But if that’s the way it is for all of them maybe I’ll just get used to it. Or turn off the backlight.

For what it’s worth, the light leakage from the space bar on my 16-in MBP is similar to yours, but I can only see it if I lean way, way back.

If I’m sitting sort up upright and type on the keys, like I am right now, there is no visible light leakage.
If I lean back just a little the K and L show light leakage.
Just a bit more and most of the ones in my photo do.
It’s just a bit annoying is all. A blemish on what otherwise seems a fantastic, perfect machine so far.
As I said, depending on Apple’s response, I’ll probably keep it. It would be nice, though, if this erupted into a “scandal” (leak-gate) and Apple offered to upgrade all these keyboards.