Listening to audio from Mars made me realize just how bad the internal speakers are on my 2018 MacMini. I’m writing a story for Sky & Telescope on audio recorded by NASA’s Perseverance rover and the sound was faint and seemed odd on the internal speakers so I tried again with good – but uncomfortable – headphones. I was amazed at the difference. Speech is audible, although low frequencies are weak, but non-speech is distorted. It makes me wonder if the internal audio system processes speech signals to sound better, at the cost of making other signals sound tinny and weak. In any case, I realize I need speakers, and I need something inexpensive that that can handle a fuller spectrum. I use my computer for work, including teleconferences, but not for music. Any suggestions?

You are correct that a Mini’s internal speaker is not very good. It’s enough for system beeps and alerts, but not for anything where audio quality matters.

I have been using (for many years now), a set of Klipsch ProMedia 2.1 speakers with my Mac. It connects via the headphone jack.

They aren’t the cheapest you can buy, but the sound quality is great and the price is perfectly reasonable for what you’re getting.

I recently purchased a pair of Edifier speakers and am very happy with them. Around $100 and very good for podcasts, video, music… sort of general purpose.

Adam started a nice long discussion on this very subject last August that you might want to consult.

I use a TV as a monitor on my 2018 Mac mini. I also use its speakers and they work very well.

I’m afraid I don’t know. It’s an old Samsung 26" TV I picked up very cheap at a yard sale.

I use a TV as a monitor on my 2018 Mac mini. I also use its speakers and they work very well.

Thanks. That’s an excellent and very easy to implement idea. I have the Mini attached to a 27-inch ASUS monitor that has built in speakers, which I used for audio before I bought the 2018 mini. I forget why I didn’t attach the monitor speakers at the time. Clearing off the desktop accumulation took a longer than installing the cable from the Mini to monitor, and the improvement was immediately obvious. The monitor sound is not as good as the good audio headphones, but it’s much better than the tinny Mini.

Any issues, problems or hiccups that I should watch out for??

Nothing that I know of or can think of. In fact, the second monitor attached to my Mac mini is also a TV that I found at another yard sale. It’s made by Dynex; a name I’d never heard before. It works well, though.

I bought my monitor as a monitor about 10-12 years ago, but it’s pretty much the same as any HDTV monitor. I don’t know what complications you might have if you bought a 4K Smart TV, but there might be some.

Don’t forget the HomePod Mini which might be an interesting option to have available.

In any case, I realize I need speakers, and I need something inexpensive that that can handle a fuller spectrum.

Most of the folks who have given you suggestions define “inexpensive” as “several hundred dollars.” But I’m guessing that’s not what you had in mind.

There is computer speaker system that has been the gold standard for a long time when it comes to getting truly decent sound for the least money: 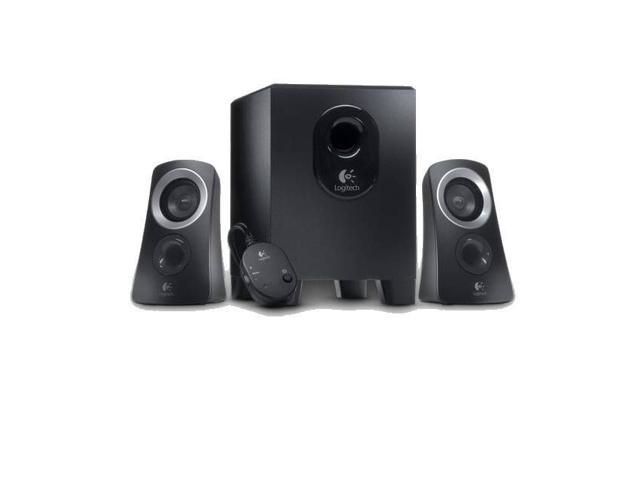 The Z313 is a powered compact 2.1 system. For the price they won’t fill an entire room with sound for a party, and they won’t provide wall-shaking deep bass. But they will provide remarkably clear and accurate sound when sitting in front of them, including a credible amount of bass. Your computer will have to offer a standard 2.5mm mini-jack for these to attach to (as almost any computer speakers would require.) This system looks like little plastic toy speakers (the woofer is actually a pretty solid wooden box, like expensive systems have), but the sound that comes out is pretty amazing. The first time I heard them I was a bit stunned.

Most of the folks who have given you suggestions define “inexpensive” as “several hundred dollars.” But I’m guessing that’s not what you had in mind.

Where? There were only two speaker suggestions in this thread (and two suggestions to use speakers built-in to a TV/monitor). The one I suggested has an MSRP of $130. The other $110. Both are available at discount for some retailers. That’s not what I would consider “several hundred dollars”.

The linked thread suggests several more expensive options, but that thread was for @ace, who (I believe) was looking for a more robust audio system. Hence several recommendations for studio monitors and 5.1 surround systems.

Yes, $35 is significantly less expensive than $130 or $110. And maybe the Logitech Z313 will be up to the OP’s task. But (as is the case for any speaker system) quality is highly subjective. If possible, see if you can find a store with a demonstration model set up. The go connect an audio source to it (I like to use the iPod I always have on my person) and try it out with the content you expect to be listening to.

Speaking as the OP, I originally was thinking of something in the $35 range. I tried the monitor speakers, and found they were horribly inadequate for a Zoom interview of a person with a Chinese accent, I went looking for Edifier speakers (mentioned above) and found their R19U speakers (2 small ones, no low frequency third speaker) on sale for about $30 at MicroCenter. So far they sound better, but I have yet them to put them to a serious work test, which for me is a Zoom with a person with a thick accent. I’m also changing my strategy so I record Zooms and use Otter to produce a transcript as a backup.

My uses differ from many other people here because what I want is clear reproduction of the spoken word for interviews and talks where I need to understand what is said, not audio music or action in a game or movie. The spoken word can be tricky because some words are easy to misunderstand if high frequencies are cut off. (In particular, Jeff and Jess sound identical on a landline phone because it cuts off frequencies above about 3500 Hz.)

Thanks for all the comments. I haven’t paid much attention to computer voice quality in the past, and it’s helpful to learn more about it. My primary music system is still an old stereo, and I have been learning more about audio while experimenting with digitizing decades-old reel to reel tapes.

I have (give or take) that logitech sub-woofer, that I used to replace a Creative sub (keeping the creative desktop ‘tweeters’ because they are pretty titanium :-). I can attest that it sounds great for the price.

BUT but… it puts itself to sleep after a time of not being used, whether plugged into the headphone port on my mac or not, and then it buzzes… even if I’ve turned them off at the remote. To the extent that I consider replacing the lot from time to time.

You get what you pay for?

Now there’s an interesting subject, Jeff. Maybe you should consult an audiologist. Meanwhile, I have found this online.

Thanks. I’ll take a look at that. I’m trying to pin down what are my actual hearing problems are. I wrote a feature for IEEE Spectrum on cellular voice a few years ago, and many of them come from the equipment, the way it’s used, and the interfaces between different phone systems. Using cellphones in speakerphone mode can make speech quite hard to hear, and some people don’t hold a cellphone well because they lack good tactile cues. When I listen to Zoom conferences with speakers at different locations, I often notice differences in speech quality. The video is remarkably good; the audio ranges from good to awful.

Newer phones with HD Voice generally are better because they carry frequencies up to 7000 Hz, but Speakerphone can lose much of that quality. What smartphones need is an automatic alignment system that helps the user improve the outgoing sound quality.

My ears aren’t getting any younger, but audio equipment is doing very little to help.

My uses differ from many other people here because what I want is clear reproduction of the spoken word for interviews and talks where I need to understand what is said, not audio music or action in a game or movie. The spoken word can be tricky because some words are easy to misunderstand if high frequencies are cut off.

Not sure if it will help your particular case, but this topic, including the suggestion to use an equalizer such as eqMac https://eqmac.app, was previously discussed here:
https://talk.tidbits.com/t/14-inch-macbook-pro-speakers-sound-muffled/17189/6

… a serious work test, which for me is a Zoom with a person with a thick accent. … what I want is clear reproduction of the spoken word for interviews and talks where I need to understand what is said

I think speakers that have good solid music reproduction (which means full-spectrum, not just the “thumpa-thumpa” sounds that some people consider music

) will also work well for you, but that may cost more than you want to spend.

For myself (I also use computer conferencing a lot for work, on a Windows laptop), I don’t use the computer’s main audio output for this. I have much much better results using a Jabra conference speaker or headset.

These days, I’m using a Speak 410 USB speakerphone for my calls. It’s not too expensive (MSRP is $130). It provides very clear audio for voice, and has good noise/echo cancellation.

I’ve also had great experience with their Pro 930 wireless headset. But that’s more expensive (MSRP is $315, but I found Amazon listings for $240 new or refurbished for $120.)

Both integrate with Jabra Direct software, allowing on-device buttons to interface with conference/softphone apps (e.g. to accept/disconnect/hold calls, mute/adjust volume, etc.) According to the datasheet, the Mac version integrates with softphones from Avaya, CounterPath and Skype for Business. Other apps will see it as a generic USB speaker/mic device.