I tried the monitor speakers, and found they were horribly inadequate for a Zoom interview of a person with a Chinese accent, I went looking for Edifier speakers (mentioned above) and found their R19U speakers (2 small ones, no low frequency third speaker) on sale for about $30 at MicroCenter. So far they sound better, but I have yet them to put them to a serious work test, which for me is a Zoom with a person with a thick accent.

[Jeff, sorry, didn’t mean to imply your hearing was defective, just that audiologists understand these things and could maybe explain them to us.

Compounding the difficulty in the particular case you mention is that, as the link I provided notes, not all foreign accents are created equal. Languages that rely heavily on tonal differences (six in Cantonese, for instance) to convey meaning don’t care as much about consonants as we do: native speakers may not have learned to “hear” some of them at all (the difference between “r” and “l” are the classic examples) and have a great deal of difficulty learning to reproduce them so they’re intelligible to speakers of western languages. This would be true even if they were sitting next to you in a quiet room.

And that (not to mention all of the other distortion introduced by the transmission chain ahead of the speakers) is out of your control. As a practical matter, the best you can do is probably to find speakers or headphones that measure flat in the range of human speech and hope that you can understand what you hear.

This must be something that professionals run into all the time these days when producing interviews for news broadcasts, don’t you think? I would love to hear from someone who really knows what they’re talking about.

This must be something that professionals run into all the time these days when producing interviews for news broadcasts, don’t you think? I would love to hear from someone who really knows what they’re talking about.

Maybe when I have time, I can try to get someone to pay me to write an article about how to best communicate orally.

I have been interviewed for radio in studios, and the audio setups are very carefully designed to minimize noise and echoes. What I found with cell phones is that the biggest problems are weak connections, which reduce the bit rate transmitted, and conversions between different parts of the network and different carriers. I suspect most people don’t really think about sound quality on the phone or on the computer, and from my experience a good headset is the best for general audio.

Being on the receiving end of a smartphone used as a speakerphone can be awful, at least partly because of how they are positioned. I would hesitate to use a speakerphone on my end because my workspace is an echo chamber, facing a wall behind a speaker, with cabinets in a file cabinet. How do you avoid those problems?

I haven’t had any problems with the Jabra devices. A good quality device should have built-in echo cancellation.

You are right, however, that cheap speakerphones (like those built-in to desk phones or software using your laptop’s built-in mic and speaker) can create horrible echo effects. Sometimes your conferencing software can compensate, but often it can’t.

Back before I got the Jabra devices, I would frequently get echo when using my laptop’s speaker and mic. I solved it by wearing headphones, and only using the laptop’s mic. Since the levels in headphones are much lower, they don’t feed back into the mic.

I’ve seen things like the Jabra devices in corporate conference rooms, but have only used them a couple of times. Trying to collect audio from several people sitting around a table seems like it would be difficult to manage.

I use a Plantronics headset on my office phone, a Webcam with microphone and an old Logmein headset on my computer. The Plantronics is around $100, and well worth it for the phone. I sometimes get echoes or noise on the computer webcam, but it’s not at all consistent. I started using headphones on the phone to keep my hands free for typing notes, and I now use them all the time.

I’ve seen things like the Jabra devices in corporate conference rooms, but have only used them a couple of times. Trying to collect audio from several people sitting around a table seems like it would be difficult to manage.

It is. Which is why the ones designed for use around a large conference table can be very expensive. (e.g. the Speak 810 costs $700.)

In the past, I’ve had very good experiences using Polycom Soundstation conference phones. Some even support extension mics in order to pick up audio from across a large conference table. But they aren’t cheap and they are not suitable for your application - they’re designed to connect to phone systems (either analog or VoIP), not to computers.

But if you only need one for yourself at your desk, then you don’t need a speaker designed for a large conference room. The Speak-410 I’m using is designed for 3-4 people seated near it (e.g. around a desk).

I have (give or take) that logitech sub-woofer, that I used to replace a Creative sub (keeping the creative desktop ‘tweeters’ because they are pretty titanium… it buzzes…

My wife has the Logitech speaker system and it never buzzes. It may be that you are experiencing a problem because you aren’t using the amplifier (which is integrated into the woofer) with the speakers that it was intended for. Or maybe you introduced noise into the system by splicing the wires.

The Logitech Z313’s get excellent reviews. I doubt that they would get great reviews if they buzzed. 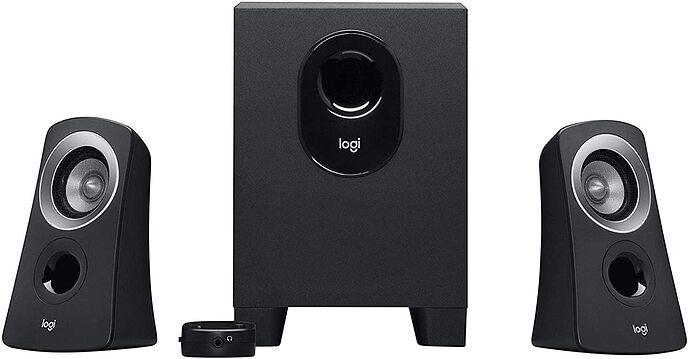 Thank you for the recommendation… I bought the Edifiers you recommended, with bluetooth, and they are great for desktop use.

As I wrote below, they have replaced the buzzing-when-asleep setup I had… which @randy2 I didn’t splice the wires; the connectors and impedance matched so I’m not sure what would be wrong. No matter, they are gone now.