So there have been a few rumors about a new desktop Mac situated between the $1k mini and the $6k MP. Sounds intriguing. Could this be part of the “peek” we’re getting on Tue?

I wonder especially what this would mean for the high-end mini expected to replace the Intel model (Mar 8 event?). Will there still be one? What will set the Mac studio apart form it? And what would the internals of this alleged Mac Studio tell us about what to expect for the 27" Apple Silicon-based iMac? (WWDC?) 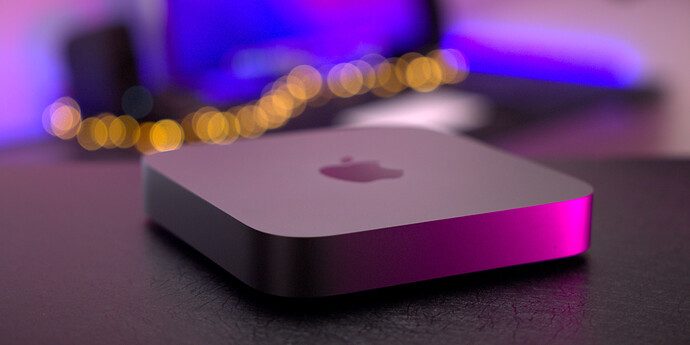 Exclusive: ‘Mac Studio’ is coming – is it the pro Mac mini or mini Mac Pro?

9to5Mac has learned that in addition to the a new Mac mini and Mac Pro, Apple has been developing a brand new "Mac Studio" computer.

I hope this does come true. If it does, I have a lot to consider between a Studio and a MacBook Pro. I don’t need to schlep a laptop around as much as I used to.

The only prognostication I don’t think will happen would be a new Intel Mac Pro. My thinking is that Apple has made it obvious for the last few years that they want to transition all their hardware to Apple silicon. The Mac Pro is the only Intel product left, and Apple is continually bragging about how super superior their M chips are, and that by far, they are the very, very best in the world. My guess is that Apple will knock down the price of the current Pro if they debut a new version, and price wise, a Mac Studio will sit somewhere below the current Pro.

I think that if there is the possibility that Apple might also release a super duper upgraded Pro display if they do upgrade the Pro. And I think the Mac Studio would be a very good idea.

I think that if there is the possibility that Apple might also release a super duper upgraded Pro display if they do upgrade the Pro.

There is indeed such a rumor alongside Mac Studio. 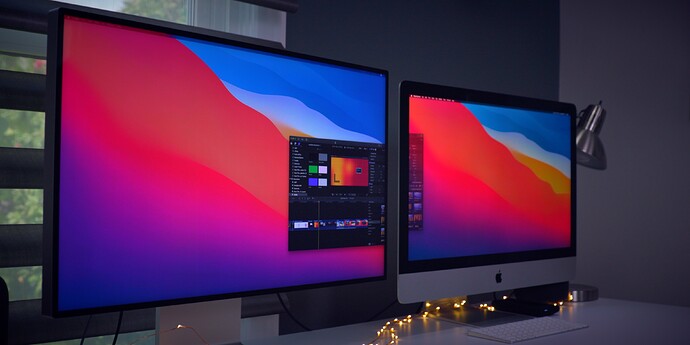 9to5Mac has heard from sources that Apple has been working on a new "Apple Studio Display" with higher resolution than the Pro Display XDR.

I will be gobsmackingly pleasantly surpised if either of those two items comes out at a price anywhere near what mere mortals, who would like/need more grunt for what we do but aren’t using the items to generate mega-revenue, can afford.

It’s usually only marketing/advertising folks that don’t understand that cheap and inexpensive aren’t the same thing.

If Apple made a 27" iMac Pro without the monitor (Mac Studio) they could sell it for substantially less than a MP, but still make far more money off it than a Mac mini. They’d open up lots of upsell opportunities to (semi-)pro users for which otherwise $6k computers (plus $400 wheels) and $5k screens (plus $1k stands) are simply out of reach.

If Apple made a 5K (or 7K?) panel at 27", IOW a 27" iMac without the iMac, they could easily sell that screen at twice what Dell et al. charge for 4K 27" displays. And at least in Mac land, people would be killing to get their hands on it. Count alone here on TidBITS how many people have asked for guidance as to getting a 5K screen that doesn’t suck. It’s not the $1200 price tag most people worry about, it’s simply the lack of any real good options. This would be a slam dunk for Apple. Good thing rumors inidcate they are working on exactly this.

Current and historical gross margin, operating margin and net profit margin for LG Display (LPL) over the last 10 years. Profit margin can be defined as the percentage of revenue that a company retains as income after the deduction of expenses. LG… 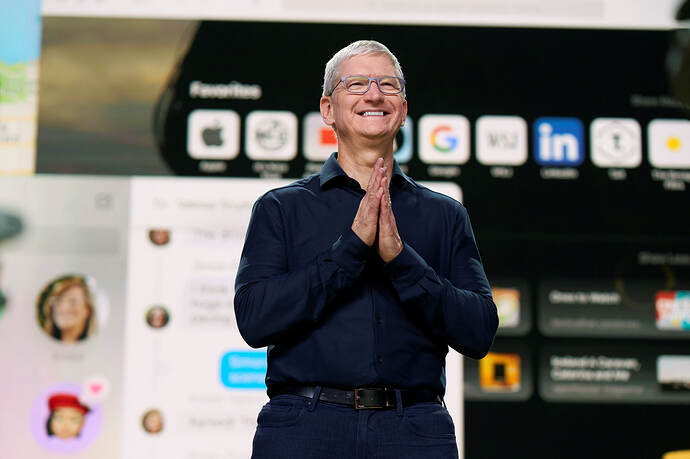 Apple just recorded a 42.5% gross margin for the quarter, the highest in nine…

Long stuck at around 38%, Apple’s gross margin has jumped the past two quarters because of more expensive iPhones and a growing services portfolio.

I also recently ranted about this here in another thread…Apple already build screens into iMacs, iPhones, iPads, and Watches. They would not have any problem building a line of freestanding monitors if they thought it would be profitable. So far, the only freestanding screen they build is primarily targeted to a very tiny, high end market segment, and it is at level that the existing and highly flooded monitor line up has not yet addressed.

Apple products and services are neither cheap or inexpensive; to lump them together would be redundant, in addition to sounding pretentious.

I will be gobsmackingly pleasantly surpised if either of those two items comes out at a price anywhere near what mere mortals, who would like/need more grunt for what we do but aren’t using the items to generate mega-revenue, can afford.

If you’re waiting for Apple to price something reasonably, it’s going to be a long wait.

I did say afford, not cheap.

If cheap were the criterion there’s no way I’d be a 20+ year Mac user. Sadly, from my perspective, Apple’s pricing in recent times is more and more aimed at those able to afford ultra-high-end fashion (I’m not begrudging people who are at that end of the market) or at people using the gear to generate 9-digit income streams.

Re the latter, as Adam points out here: Apple: Design Macs for Other Types of Professionals - TidBITS there are a lot of pro users below that level of need. 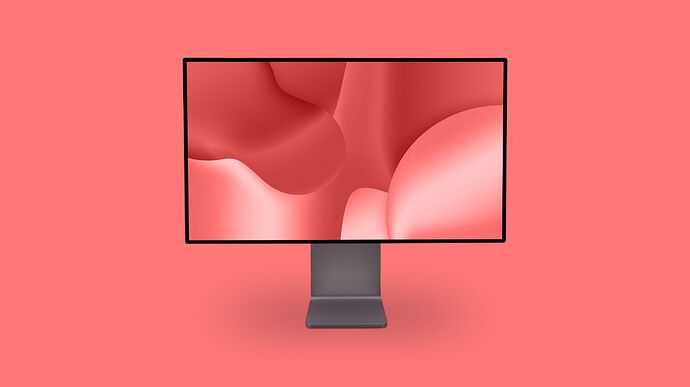 Apple Completed Development on External Display 'Months Ago,' Could Launch...

Apple completed work on an external display "months ago" and has since planned to launch it shortly after the latest 14-inch and 16-inch...

Looks like two models. One as a successor to the Pro Display XDR and one “more affordable” option. Both were supposedly completed months ago already. The rumored 7K display with an A13 apparently is yet another project. I’m wondering if possibly this 7K is the successor to the Pro Display XDR and the new display we’re about to see is the “more affordable” option.

Note that “more affordable” is being rumored as about half the XDR, IOW about $2500.

But will consumers pay more for an affordable Apple model when there are literally thousands of better and significantly cheaper models out in the wild?

Who said anything about better? Nobody here ever argued cheap PC kit was ‘better’. It’s cheap, but it’s definitely not better, let alone better at running macOS and its apps.

There would be literally (observe correct usage of that word) one better product. That would be the Mac Pro. At $6k it’s well beyond usual upsale territory as has been sufficiently established here and elsewhere. There’s plenty room. Both in terms of price and in terms of features/functionality.

The point is that, to date, Apple is targeting a specific market segment that will be more profitable. Please refer to the links about profit margins for displays posted above. Other companies already launched higher end displays to compete with the XDR, but as yet they are not close, and certainly no cigar. 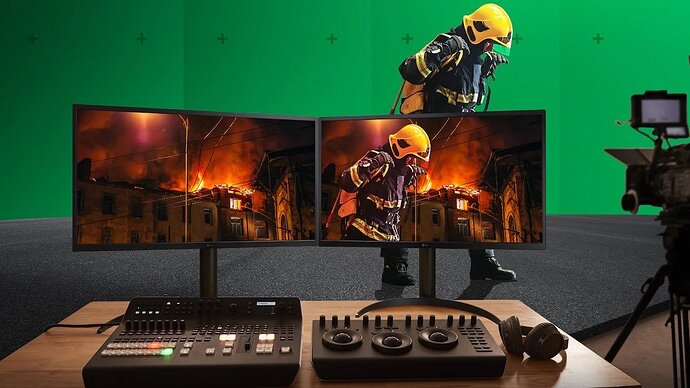 LG has unveiled the next iteration of its UltraFine OLED Pro monitor lineup for 2022, and it includes a lower-cost 27-inch display option, which could make the lineup's pro features more affordable.

If Apple is looking to build out a monitor line and maintain their profitability goals, maybe they should make a model that doesn’t require $999 stand. But I suspect the margins on the stand are extremely good for Apple.

For $1,000 I would consider it, but $2,500? No thanks. That’s a monitor that belongs in a professional studio not in a consumer’s home office. However, I’ll wait until this thing materializes to see how it’s priced.

Interesting. But not much cheaper than Apple’s monitor given that it’s being sold at $4,000. Less expensive overall but what about build quality, etc.?

We’ve circled back to my point about waiting for Apple to price things reasonably is going to be a looong one.

OK, so the Mac Studio is rumored to be this really fat Mac mini. If that is indeed true, judging by the size of that thing, you really have to assume it was designed to handle far more than just one M1 Max.

Renders alleged to be the "Mac Studio," described as a hybrid between a Mac Pro and Mac mini, have surfaced online just a day before Apple...

Assuming this rumor is true, I hope there’s something in there to warrant a taller case and not just an extra-big heat sink. Some things that would be nice include:

Of course, there’s no possible way to put all of these in a case like that at once. I’m presenting a laundry list of features, not a product spec.

I’m starting to wonder if this Mac Studio is perhaps the new Mac Pro. It’s clearly geared towards much more cooling that we have seen so far for even the M1 Max. It’s also got more internal room, perhaps for extra memory or flash? Perhaps for PCIe? Or multiple CPUs? I’m starting to think there might not be an M1/2 in a Mac Pro enclosure at all. 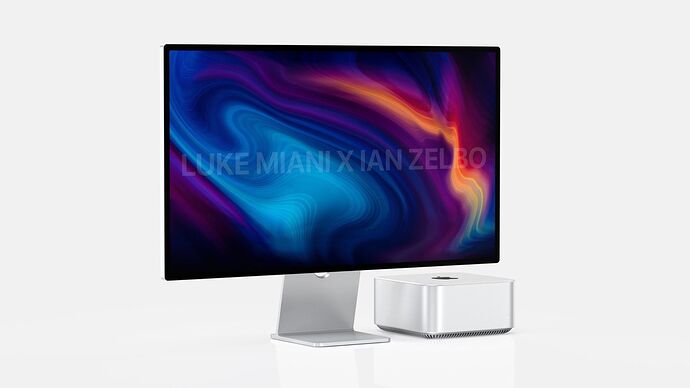 Apple could unveil a new "Mac Studio" machine and a new display that runs iOS at the March 8 event, according to a last minute confirmation...