Luna Display Turns a 27-inch iMac into a 5K Display

The Luna Display dongle, when connected to a 27-inch iMac with 5K Retina display using Thunderbolt, turns the iMac into a full-fledged 5K display. However, Adam Engst found that it comes with a fair number of tradeoffs.

I’m always surprised these solutions work as well as they do – even when reviewers justifiably criticize their shortcomings.

Just consider the raw required bandwidth of a 5K display, even at only 30 Hz refresh and using just 8-bit color.

And that’s at just 30 Hz! In order to get this image data across a wifi network, even if it’s pretty good wifi, I would expect compression has to get the data rate down by almost 2 orders of magnitude. Even wired Gigabit between only these two clients would still require compression by at least one order of magnitude. Now of course often times (maybe even most times) only few of those almost 15 megapixels need to be updated, but the fact that you can even move a window around and get reasonable refresh and image quality (let alone watch TV) is an indicator that indeed such a dongle solution can compress and push data incredibly well over the network. To me that’s quite an impressive feat in itself. Even if for some workflows/tasks that’s definitely still not good enough.

Oh yeah, what Luna Display is accomplishing is total magic, even with those tradeoffs. I have to imagine that it’s really hard too, since they would have wanted to ship with 5K support if they could have, but it took two years to get it working well enough.

I really, really hope that Astropad can somehow tweak this so I could use a 27"iMac as the PRIMARY display for a Mac Studio

Tempting. Two things keep me from instantly buying one:

The iMac is fully on I’m assuming.

I think when I’m ready to do this (Mac mini or Studio—close call for my use case), I’ll just sell the 2017 iMac and get a monitor. eBay prices for mine are about $1000, so if I get half of that; it will be worth it for me. And it will continue to work with OS updates.

Amazing what Luna’s done, but I don’t need any more moving parts.

Interesting possibility. Thanks for the review. A video review would enable folks to see what you’re describing and allow them to evaluate its pros/cons for their own use case(s). Does anyone know if such a video review ( perhaps beyond what the Luna folks offer ) exists?

Yes, indeed. I have a iMac (Retina 5K, 27-inch, 2017), and am thinking of getting a Mac Studio. The ‘obvious’ way to go is to buy a Studio Display as well and throw out the iMac. But then I would be spending $1600 to replace the iMac 5k screen with essentially the same screen, plus better speakers and an allegedly better webcam (but there are many reviews saying that the webcam doesn’t work properly at the moment). So keeping the iMac and using it as the ‘Primary’ screen connected to the Mac Studio using Luna and a Thunderbolt cable might make sense. Adam lists some issues with the Luna, but I am wondering whether any of them are relevant to my suggested setup:

Do you think this setup would work satisfactorily?

Luna have said to me:

Thank you for your interest in Luna Display! We expect Luna to work with the new Mac Studio and to allow you to use a 2017 iMac as a display for it, but we cannot say for certain at this time as we haven’t had a Mac Studio in to test with Luna yet.

The iMac is fully on I’m assuming.

Yes, the secondary iMac that’s being used as a display is fully on and running the Luna Secondary app. I suppose you could also run other software there in the background, though it might impact performance.

A video review would enable folks to see what you’re describing and allow them to evaluate its pros/cons for their own use case(s).

I tried to take some screenshots, but it was hard to compare before and after so I decided not to include them. With a video, I’d worry that compression and not viewing it at full size would present an unrealistic comparison.

Performance not great - but he was testing with a wifi link, and says that ‘If you were using the 40 Gbps Thunderbolt 3 … the extra speed might eliminate all the interface hiccups’.

I tested with Thunderbolt 2 as well, which was better than Wi-Fi or Ethernet. That’s 20 Gbps, and 40 Gbps Thunderbolt 3 might be better, if it’s a possibility.

So keeping the iMac and using it as the ‘Primary’ screen connected to the Mac Studio using Luna and a Thunderbolt cable might make sense.

I don’t think it’s likely to be satisfying on a production Mac. On every boot, you’d have to have the Luna Display software launch at login and wait for it to connect to the secondary iMac. Anything that had to be done before the Luna Display app ran, like macOS Recovery or even logging in as another user, wouldn’t be visible. Obviously, it’s possible to run a headless Mac and control it via Apple Remote Desktop or the like, but you would probably need a cheap utility monitor for such troubleshooting tasks. In fact, ARD might give you earlier access to the boot screen from another Mac.

8 posts were merged into an existing topic: Using Universal Control in macOS 12.3 Monterey and iPadOS 15.4

A friend sent me this link, actually looks a very promising mod: 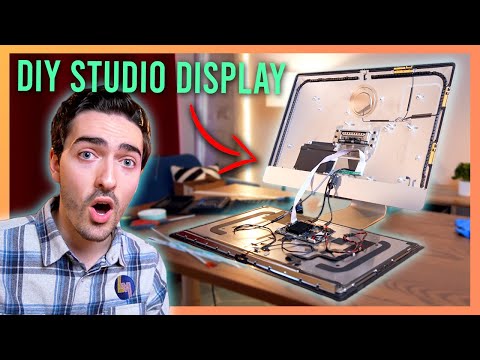