This is to reply about the Land line works issue. Yes that was true in the past when all the copper lines ran from your home to the Central Office switches where batteries in the building kept the dial tone, etc functioning
However in areas with new development, like here in Florida, the telephone company now runs fiber to a concentrator in the area and then (mostly) copper to the customer. The concentrator (SLIC I think ) uses utility and has enough battery for about a day.
Here, when a hurricane hits, we lose power for typically 3 days minimum. My experience is that after a day it doesn’t matter whether you have “land line” or VOIP. your phone doesn’t work
My experience is that cell service (portable towers) comes back before the electricity to the community is restored. The VOIP providers are no faster because they rely. on community power
The cell phone (with hot spot capability) is your best option.
And here in FL, get a whole house generator

Jerry, I live in a rural area of Northern California. After the devastating Camp Fire (that destroyed the town of Paradise) that was caused by Pacific Gas & Electric (PG&E) poorly maintained infrastructure, PG&E was ordered by the Federal judge overseeing its felony probation (for the San Bruno gas explosion) to prevent a reoccurrence. PG&E decided the cheapest and easiest way was to just shut off the power whenever a storm with high winds came through. So they did that several times though last winter. With my landline I was able to have phone service with a basic corded phone. We are told to keep the cellphone network that might still be up free for use by police and fire. BTW, if you think the current stay at home is bad, try doing it without any power to your house in the winter - no heat, no lights, no cooking, no opening the fridge or freezer.

I agree with you that landlines can work. My point is that in areas with change the structure can change. My community is full of 40 year old infrastructure but the local telco, about 15 years ago switched to fiber / concentrator

Here, when a hurricane hits, we lose power for typically 3 days minimum. My experience is that after a day it doesn’t matter whether you have “land line” or VOIP. your phone doesn’t work

A big % of people in the US were affected either directly or indirectly when the three buildings Verizon had concentrated their mobile equipment and services in NYC collapsed on 9/11. The Pentagon was also badly affected. In most instances, it lasted quite a bit longer than three days: 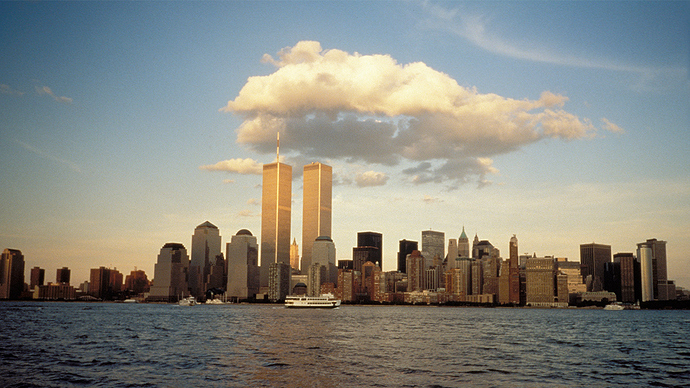 When the worst happens, companies have to put their employees’ interests above all else.

After Hurricane Sandy, it took weeks and weeks for many people to get electricity and phone services restored.

PG&E decided the cheapest and easiest way was to just shut off the power whenever a storm with high winds came through.

Those ******* blacked us out twice last year in Berkeley in the wake of the Camp Fire fallout. In both instances cell services were impacted. I don’t have a landline myself, but neighbors told me theirs worked. I’m assuming around here landline infrastructure is rather old (many houses in my neighborhood were built in the 1920s). I would assume in areas where the landlines are newer (such as what Jerry mentioned above about his FL area) those could be just as affected.

One of our operators at work used to live in Paradise. His house, in fact his entire street, burned down to ground and he lost two neighbors to the Camp Fire. His wife and kid fortunately were down in Chico when it rolled in. He’s the most charming person you could imagine. It pains me that somebody so kind had such bad luck. And anybody who’s ever been up there in the woods around Paradise knows what a beautiful area (there’s a reason they named the town such) was devastated. PG&E used to be a well maintained public utility. Now they are convicted felons (San Bruno explosion) and bankrupt too, but in the meantime their shareholders made bank. Taxpayers will get to bail them out while we also get to endure extended power outages whenever fire season comes along. It pains me to say we, the NorCal voters, let that happen.

What do you mean they don’t die when the power goes out? Of course they do! All modern home phones must be connected to an electrical outlet as well as a phone line—unless you’re talking about an antique princess phone (introduced in 1959).

It’s not a princess, but I do have a (non-wireless) Plain Old Telephon plugged in for just such occasions.

OMG…My very own Princess phone was one of the things I wanted most when I was a kid that I never got. My family did’t have much money. But when I think about it, the Princess was one of the highest tech consumer electronic communications device of its day. The light up dial and pressure sensitive keys were truly revolutionary. Compared to other phones, it was small, sleek and beautifully designed. All the other phones were bigger, clunkier and heavier and either square or oblong though it was clearly targeted to women, the beautiful oval design, attractive colors and functionality was truly unique. The Princess was kind of like the iPhone of its day

Marilyn, realize your dreams for $10:

I keep a couple of these around for testing the (rapidly diminishing number of) wirelines in my life.

I have a Panasonic cordless system that will power the base station from the battery of the phone docked there if the power goes out. Normally, the flow runs the other way to charge the phone.

But it’s not a beautiful Princess!

. I wouldn’t even be able to color coordinate it to my room.

You’re right… I had conflated “Princess” and “Trimline” in my memory. But at least they have both colors: black AND white.

I had an old Bakelite dial phone from the 1940’s that I bought at a flea market and illegally wired up as an extension, disconnecting the bell because the Phone Company would use the load caused by ringers to detect scofflaws such as myself. I hated the look of that phone and would have died for a Princess. Of course the old dial phone would probably be chez chic now.

I had an old Bakelite dial phone from the 1940’s … the old dial phone would probably be chez chic now.

If you still have it, it wouldn’t be a big deal to attach a modular connector to its cord and use it today. It should still just work. I don’t think the phone companies ever disabled pulse dialing.

I don’t think the phone companies ever disabled pulse dialing.

So far they haven’t. I still have a trimline with a rotary dial in the handset that I use when the power goes out at the summer cottage and it still dials calls fine. (Well, it did last summer.)

I don’t think the phone companies ever disabled pulse dialing.

Actually, their systems convert the old pulses into the tones used currently.

I have a Panasonic cordless system that will power the base station from the battery of the phone docked there if the power goes out.

Ditto, but the batteries don’t last long when your power company arbitrarily shuts down the power for a couple of days for “safety”! I then use Opus: 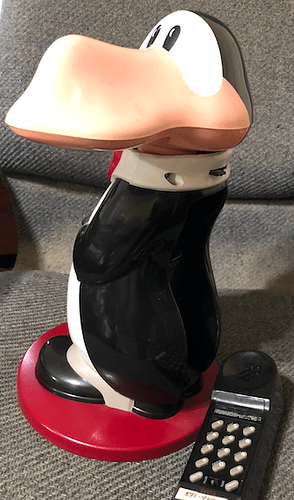 Actually, their systems convert the old pulses into the tones used currently.

Do you have a source for this?

It sounds like a very strange approach, since the phone system doesn’t use tones internally (and hasn’t for many decades). The SS7 and related protocols use out-of-band data to signal the creation and teardown of calls.

I would expect that the same front-end software that decodes tones would also decode pulses, using the result of either to drive the SS7 protocol that actually connects the call.

Do you have a source for this?

I’ll have to search but it is what I remember when the change was reported back in the last century; don’t know if it was pre or post the Ma Bell beakup.

But it’s not a beautiful Princess!

. I wouldn’t even be able to color coordinate it to my room.

You can get one from eBay: https://tinyurl.com/yby3u8hn