Is It Safe to Upgrade to macOS 11 Big Sur?

Originally published at: Is It Safe to Upgrade to macOS 11 Big Sur? - TidBITS

Should you upgrade to macOS 11 Big Sur from a previous version of macOS? Only you can answer that question for sure, but Adam Engst has upgraded his primary Mac with no significant problems. Our recommendation is that it should now be safe to upgrade, though you might want to wait for macOS 11.3, due soon.

To me it appears that it’s really the little utilities that are the gotchas. I think I have only one app left that doesn’t work with Big Sur - WatchGuard Mobile VPN - which I need for a client.

Normally, I would update a mac mini in the office here and watch, but thinking about this, I can turn that around. Run the incompatible apps on the spare mac mini and then update my main mac. Hmmm…weekend after next I have a lot of down time. Decisions, decisions…

Can’t you just use another OpenVPN client ?

This page is about mobile clients but MacOS clients will work the same way.

One small annoyance is the little “close box” X on “Your iCloud Settings are out of date” does NOT close the notification, it opens the System Preferences application.

Yes, I probably could do that. With a bit of luck, the techs that manage that network will do the work at their end to complete that. not sure that I am that high a priority.

Thanks for the link.

My impression of Big Sur thus far has been that it is less laggy than its predecessors, and has a generally pleasing interface with some notable improvements.

On the concerning side, it seems harder to run older programs through virtualization, which makes me a little nervous. Hopefully, this will improve in time.

Big Sur is, of course, the only option on the new M1 Macs. I’ve discovered on the MacBook Air that if you want to work at the command line, you may need to install Homebrew twice: once in native mode and once under Rosetta to support third party packages that haven’t made it native to Apple silicon as yet. So it’s still a bit bleeding edge in that sense. But Rosetta 2 is impressively fast, albeit a tad heavy on the battery.

11.2 fixed the weekly kernel panics I had weekly with the new MacBook Air M1.

macOS BS has the most ridiculous amount of bugs I have ever seen in 30 years working with Macs. From showing icons in toolbars, to message dialogs, to the clipboard, to Messages, to AppleScript in Rosetta. Most of the bugs aren’t bad. But none should have made it through Apple’s QA. If they still have one.

This screenshot is from last week. You need to zoom in to see the d and the e next to the scrollbar: 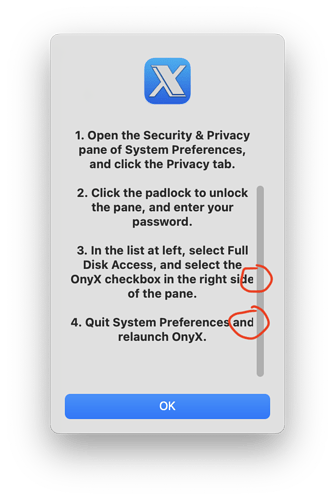 But none should have made it through Apple’s QA. If they still have one.

I’m obviously biased as a disgruntled Apple QA ex-employee, but I don’t think it’s that simple. Apple does still have people doing QA; I unsuccessfully tried to recruit some of my former colleagues working for my ex-boss; getting someone to move to New York who has a place to live in Silicon Valley is a hard sell. (I didn’t even try to lure away anyone else.) And in my experience a lot of Apple testers do a very conscientious job in reporting bugs in the areas they have time and a mandate to test. But reporting a bug doesn’t necessarily get it fixed, especially in the new Apple where the hardware schedule has to take priority over fixing bugs.

More ranting at The Era of “Update Automatically” is Over; tl;dr:

I need a sacrificial machine running a reasonably recent MacOS for Xcode (e.g. to diagnose why battery life evaporated when I upgraded my iPhone to iOS 14 (Answer: Siri)) and TurboTax, but it will be a while before I upgrade my real Mac.

These are freaky problems, but I don’t understand the reference to Migration Assistant. If you’re upgrading from Mojave to Big Sur in place on a Mac, there’s no migration involved. Or did you do something more complex that might have bumped into edge cases?

Hey Flash, my battery life tanks with every upgrade, to the point where I was afraid to take my SE above iOS 12. I can’t remember if the 4s did the same thing but it was pretty consistent with the newer phone.

I’m obviously biased as a disgruntled Apple QA ex-employee, but I don’t think it’s that simple. Apple does still have people doing QA; I unsuccessfully tried to recruit some of my former colleagues working for my ex-boss; getting someone to move to New York who has a place to live in Silicon Valley is a hard sell. (I didn’t even try to lure away anyone else.) And in my experience a lot of Apple testers do a very conscientious job in reporting bugs in the areas they have time and a mandate to test. But reporting a bug doesn’t necessarily get it fixed, especially in the new Apple where the hardware schedule has to take priority over fixing bugs.

I’ve upgraded all our machines to Big Sur, with no incidents of note. All running smoothly, the random and daily crashing that Catalina introduced (I had to revert back) which switching to late version Catalina re-introduced… that was painful. Not an issue with Big Sur, none of that.

I do think there’s issues with USB-C / Thunderbolt / Power - the one interface to rule them all is not ready for primetime I think. Where the fault lies I do not know.

Hey Flash, my battery life tanks with every upgrade,

And it doesn’t come back after a few days?

System updates frequently result in all kinds of background processing work (optimizing/repairing APFS, indexing document files, rebuilding caches, etc.), which results in a battery drain. It’s low-priority processing, so it takes a long time to finish, but it should finish after a day or two, after which your battery life should return to normal.

You’re quite right, I left out a lot of details not of general interest: I needed to keep a 10.14 partition on my sacrificial machine to do my taxes, in case I encountered problems with 11. So I cloned my 10.14 drive to an external USB drive, wiped the original, repartitioned it, and cloned it back to one partition, installed a fresh 11 on the other partition, and ran Migration Assistant.
I seem to be the only Keyboard Maestro user affected by the ACL problems (see Troubleshooting [Keyboard Maestro Wiki]), or at least the first to figure it out. Problems with search in Mail.app seem more general (below, some of them going back to 10.15, which I skipped), but none of the solutions listed helped me.

It comes back eventually but not in a couple of days. I secretly think there is a limit to how far a device can be upgraded and it’s earlier than the updates we get. Anyway, a little OT, sorry! Flash’s comment just caught my eye.

And it doesn’t come back after a few days?

It got somewhat less disastrous after a few days of turning off everything that should have been relevant, starting with Covid-19 contact tracing (about which there had been complaints, though it may have been using energy quite legitimately). But I still had to disable video during Perseverance’s landing, and it died thoughtfully immediately afterwards. Killing the part of Siri which should not normally be on (rdar://FB8978886) helped a lot: I can now walk up and down my 35 flights of stairs without using a backup battery, but need to carry it when I leave the building.

I’m afraid the economics of that make entirely too much sense. There is an imperative to test for, find, and promptly fix new bugs in new OS code on new hardware, at least the kind of bug that will get into the news. New bugs on old hardware, newly-introduced bugs in old code, or losses of functionality in replacements for old apps, sadly less so. The cult of novelty makes this worse; I wish Apple would admit that its testing methodology and the increasing complexity of its codebase mean that it should only be making changes that are truly necessary.

I tried to install the latest Big Sur update, and despite my gigabit internet (and testing that it was working properly), the update at night a few days after its initial release was running at something like 10 Mbps. It was the weirdest thing. I left it running and it eventually completed pulling down what I recall was a few gigabytes for the update. Seemed odd.

I do wish everyone would go back to putting out updates as actual updates and get off the yearly bandwagon. I am pretty sure Intuit started this back in the 90s and it took everyone else awhile to jump aboard. At this point I don’t see the benefit of it. I actually asked Intuit over the summer to tell me what fantastic improvement they made between QB 2016 and QB 2020 and they didn’t have an answer.

Apple does at least do something flashy each year but at what cost? I’m looking at a new phone this year and feel like if I don’t update all my hardware (i.e. laptop, iPad and iPhone), they will just never talk to each other again. I’m actually dreading it the new phone instead of being excited at the new features I’ll be gaining since I got the 2016 SE.