iPhones and iPads Now Require a Passcode on Every Backup/Sync

Originally published at: iPhones and iPads Now Require a Passcode on Every Backup/Sync - TidBITS

People who use their Macs to back up or sync their iPhones and iPads have discovered they must enter their device passcode for every connection. What’s up with that?!? Adam Engst explains: it’s Apple’s ham-handed response to a security vulnerability.

It’s a freaking BUG. If I don’t enter the password, the backup still happens.

Thanks for explaining this. This “fix” has one other side effect that I have noticed daily: when I plug my iPhone or iPad in to a third party USB-A charger via (Apple) Lightning cable, I am prompted to “Trust This Computer” by entering my passcode. I have learned that pressing Cancel has no negative effect (nor will entering my password have any positive effect). I’m guessing I could put a data-blocking adapter on the cable to prevent it from thinking that the USB charger was a “computer”, but I really shouldn’t have to do that. I should probably file Feedback on this.

If I don’t enter the password, the backup still happens.

If I click “Sync” in the Finder (Big Sur) and then I don’t enter the password, I get an error on the Mac: 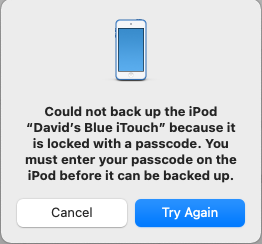 If I then click “Try Again”, I will once again be asked to enter it.

If I click “Cancel”, the sync operation will run normally. But it will not make a backup before that sync operation. When all activity stops, the “last backup” date/time remains what it was before I started.

Now, sometimes, that’s just what I want. I don’t always want to make a backup (which can take some time) before every sync operation, and before this “feature”, it has been kind of difficult to perform a sync without a backup. So I guess I now have an option

I don’t always want to make a backup (which can take some time) before every sync operation, and before this “feature”, it has been kind of difficult to perform a sync without a backup. So I guess I now have an option

I see this same process in macOS 10.14 Mojave. Nice to be able to skip the backup before a sync operation!

Thank you very much, @Ace, for giving this issue some much-needed airtime!

After much wailing and gnashing of teeth, I eventually just stopped syncing and backing up. I already have iCloud Plus, but ADP hasn’t made it to Blighty yet and I can’t justify the extra storage for the backups, even though I (very grudgingly) concur that that’s probably the direction of travel. As noted one can (sort of, explained later) sync without the backup, and one can trigger a sync on demand instead of automatically if one turns the feature off in the device settings in Finder/iTunes. However now the problem I have is that the device screen must be off before the prompt appears to cancel or try again appears on the Mac side (illustrated above by @Shamino). This is easy enough when the device is in reach; just wait for the trust prompt, then either wait for the screen lock or manually hit Cancel and lock the device before responding on the Mac. But if the device is in the other room, suddenly it’s a guessing game. If I happened to leave the device unlocked, or if the device shows the prompt but does not re-lock in time for me to hit the Cancel or Skip Backup buttons for whatever reason (no screen lock, I hit it too soon, etc), there’s deadlock with perpetually waiting for the backup to start, and the only option is to go to the other room and lock the device myself. This is very, very, very annoying.

Yes. Clearly, I want Apple to fix this. Ham-handed? I think that’s too kind. Cack-handed, I think I called it. Maybe worse, under my breath.

Makes me glad that I procrastinate on OS updates. My iPhone 7 Plus is still on iOS 15.4.1. My iPad Mini 4 is on the same version of iPadOS. (Neither can be upgraded to iOS/iPadOS 16.) Until I’m finally able to get my phone upgraded (don’t ask—it’s been a comedy of errors with my mobile carrier and Apple), this will be a non-issue for me. Maybe by that time Apple will have figured out and implemented something that isn’t such a pain in the rear.

if it’s a feature, nobody sent the memo to second level support: i was on a call with a support tech regarding this passcode annoyance. fortunately the call was on the device in question because the tech wanted me to reimage my phone to maybe make this prompt go away. having zero confidence in these pathetic and terribly disruptive solutions (reboot, reinstall, reimage) i’m living with this annoyance until we get enough people together for yet another class action lawsuit.

btw: another side-effect of this “feature” is that the mac prompts me to trust my magic mouse when i plug it in to recharge …

Strange. On my devices (at least with USB sync), the screen pops up even when the device is unlocked.

Yeah. I assume that’s because the device switches from Bluetooth operation to USB when a cable is connected.

This is an important feature for a keyboard or trackpad, since you can use it with a dead battery. It’s pretty useless with the Magic Mouse, due to the position of the Lightning connector.

This change has made iMazing annoying to the point of being useless for automatic WiFi backups.

Also for some reason iMazing no longer completes WiFi backups of my iPhone even after entering its device password; it throws an error every time even though WiFi backups complete on other family-members iPhones.

Let me be specific about what I’m seeing. (0) I rebooted the laptop to get to a clean situation

(1) plugged in the phone, unlocked it. Phone shows up in the Finder. The process stalls at the “backing up” step on the Mac: 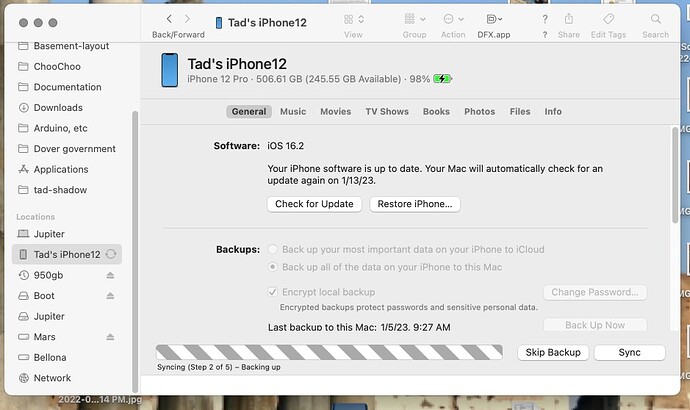 On the phone, I see this: 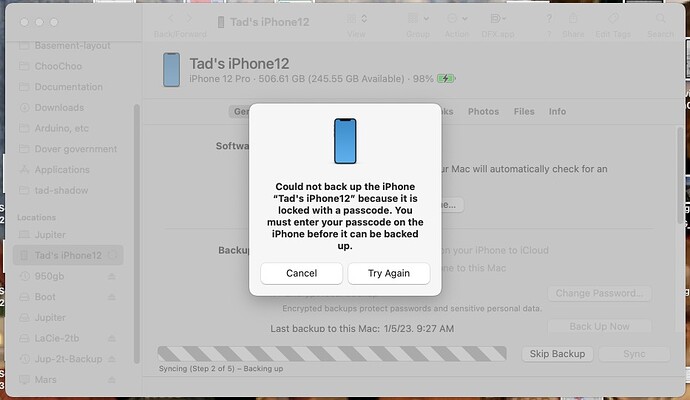 I hit Cancel there. too.

(3) Despite that, backups happen: 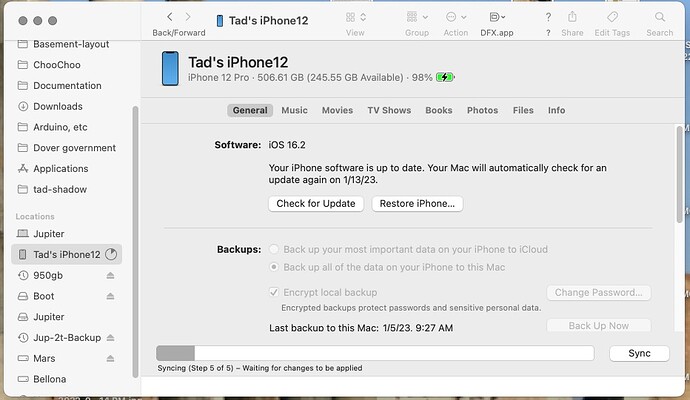 So as long as I do -something- on the phone, it syncs/backs up.

That screenshot says that your last backup was January 5.

I use iMazing because it actually does full backups; data and apps. iCloud backups rely on the App Store for restoring apps. When apps are removed from the store your’e out of luck. Some apps will linger for some time in your purchased app list, but eventually they disappear from there too. iMazing solves that problem and it has saved my bacon several times.
The iMazing backups started to clog my system drive so I have directed them to my backup drive; that’s what its for ;-)

The passcode thingy is of course massively annoying; surely Apple can do better than this…

Fair enough… Seems I’m confusing “sync” with “backup”. So when it says “(step 2 of 5) backing up”, it’s not actually happening.

I entered my phone password, the backup step did conclude and update the date. So at best this is very confusing, as well as annoying to enter the password each time. 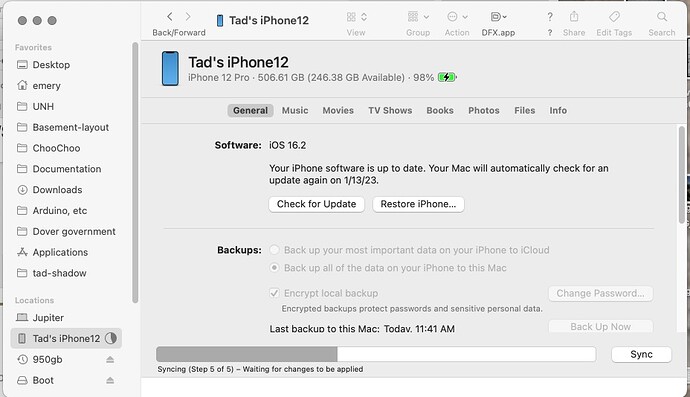 At that point, it is trying to perform the backup, and is waiting for the phone to unlock.

When you click cancel, the backup step is canceled and the rest of the sync continues.

Its only sync’d. I did your steps but what I get is after I cancel the iPhone code instead of enter the 6 digit, and click cancel on the iTunes backup saying I have to enter passcode, then cancel, I get a new window with the image of my iPhone SE and OK button. No message, no warning. Click OK and backup is cancelled.
You have to enter your pin to backup.
Same goes with importing with Preview (which I do not sub to Photos and use manually import from my Phone to folder on HDD array attached to my mac). If you want to import from your phone via USB using Preview, you have unlock it.

What we have here is an additional step beyond just “unlocking the phone”, it’s entering the passcode (even with Face ID enabled.) Not disagreeing with you, just wanted to be clear about what’s needed.

Strange. On my devices (at least with USB sync), the screen pops up even when the device is unlocked.

Ah, sorry, misunderstanding. I mean after the prompt appears. So the device can be unlocked to display the prompt, but the screen must still lock once the prompt has been displayed for the Mac-side prompt to cancel appears. Example: turn off automatic screen lock (set to never); can you now start a sync without touching the device?

I use iMazing because it actually does full backups; data and apps. iCloud backups rely on the App Store for restoring apps.

I like iMazing because it does incremental backups and so each of its backups is faster than both Apple’s local backup or iCloud backup.

Not only is it faster, these incremental backups support versioned restores. And, it also permits restoring just some part of a version. Moreover, you can extract data from a backup and export it to a Mac.

As I understand, all of Apple restores are all or nothing; you can’t, for example, restore only your photos but keep the rest unchanged. Furthermore, as I understand, each iCloud backup replaces the prior one. So, if you automatically backup to iCloud each day, you can never restore any data older than one day.