In iOS 16, why do notifications disappear?

I like the new feature in iOS 16 Photos where you can grab objects. Its’ fun.

But why do notifications disappear? This has happened multiple times today. In iOS 15 notifications hung around until I went and looked at the item in question. But now they are all disappearing - not sure of the timing. But things like Words for Friends notifications and LINE notifications, etc., just seem to go away after a way.

But why do notifications disappear? This has happened multiple times today. In iOS 15 notifications hung around until I went and looked at the item in question. But now they are all disappearing - not sure of the timing.

That’s not happening to me. What happens if you swipe up from just above the bottom of the Lock Screen? (Not from so low that you are swiping from the home bar if you have a Face ID phone - from just above the area where the flashlight, focus, and camera icons are).

If I do that, the notifications reappear! I never knew about that gesture. However, how do I know there are notifications there waiting for me to look at? Why did they become hidden?

I tried that, because I was missing the list. But it doesn’t help. Both List and Stack are the same. It’s great I know they’re there now! But I wonder why they are hidden.

This is 100% reproducible. Just wait for the screen to turn itself off, or press the button on the side to turn the screen off. When you next tap on the screen the notifications have vanished from the lock screen.

However, how do I know there are notifications there waiting for me to look at? Why did they become hidden?

It’s been like this for several iOS versions now. If you showed the Lock Screen and there are no new notifications, the older ones would not show until you did the same gesture. I believe the thought was that you had already seen the older notifications, so only new ones since the last time the phone was showing the Lock Screen would appear, to focus on what’s new, not what you’ve already ignored.

(By the way, I left them in above, but I’m getting more and more annoyed by iOS’s insistence on “correcting” and first letter capitalizing Apple’s terms like “lock screen” above. To fix this, it takes paying attention to choosing the left-most what-you-typed phrasing in the text correction bar every time it happens, and I keep forgetting that I’m typing one of those magic phrases.)

Here is my wife’s phone on iOS 15. I had turned it on to show notifications, then turned it off. This is what it showed the next time I powered it on. 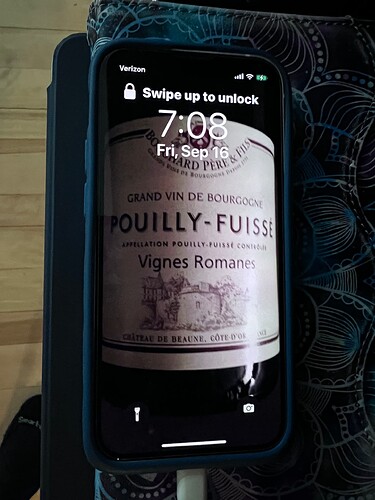 And then a swipe up. 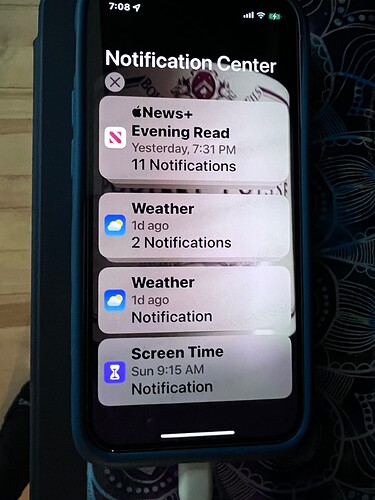 (I guess she doesn’t care much about screen time. I’ll have to show her how to turn that off.)

OK. Now with them invisible go to the home screen and pull down from the top. Do you see the notifications?

I’m sure that with my iPhone 13 Pro that if there are notifications in the middle of the night and I see them on the screen and then the screen goes dark after timing out the next time I tap the screen I saw notifications. Otherwise I would never have been able to find them since I didn’t know about that “dragging up” on the lock screen!

They are definitely, definitely vanishing from the lock screen, very unlike how it was in iOS 15. I can drag up and see them. But if I don’t drag up they are not visible. And I’m sure they just hung around on the lock screen (or on the home screen if I dragged down) in iOS 15. I didn’t have to do anything special to find them.

It has changed from iOS 15; it’s obviously by design. See this from the iOS 16 guide, where it explicitly says that you scroll up to see older notifications.

View and respond to notifications on iPhone

On the iPhone Lock Screen, view and respond to notifications of incoming messages, invitations, upcoming events, and more.

Sigh. But how are you supposed to know if there are older notifications waiting to be looked at without any indicator?

You don’t; but that’s always been true when there are no notifications outside the notification center.

In order to see all notifications:
Bring up the lock screen (you can do that by flicking down from the notch on notched screens. Then flick up from anywhere between the center of the screen and the imaginary line connecting the flashlight and camera icons.

I swear that’s not the way it’s been working all these years. I didn’t even know about that “flick up from the center of the lock screen” gesture until yesterday. But notifications have never gone invisible on me until the iOS 16 upgrade.

This site talks about the issue: [Solved] iOS 16 Notifications Disappearing from Lock Screen.

They write:
“Since iOS 16 release, we have been asked a lot about the notification alerts is missing from lock screen issue.”

Their solution seems to be going through each notification setting and changing it to persistent though.

So, now you know - if you want to see notifications, you have an extra gesture to perform. If there are none left, there will be a notice that appears as you swipe (and that disappears when you stop) that says that there are no new notifications.

It’s clearly a new design decision. Perhaps Apple is trying to bother us with notifications less, and this is one way they’ve designed that? Perhaps Apple knows that most people care more about the photo that they put on the lock screen than they do about seeing old notifications? I’m pretty sure that this is not a bug.

Apparently you can go through each app under notifications one-by-one and select “persistent” for the banner type if you want to make sure you don’t miss certain ones, like Messages or Mail. That latter one is important for me because I use my iCloud email address just for getting notices of server problems.

That latter one is important for me because I use my iCloud email address just for getting notices of server problems.

So you don’t act on them as soon as you see them?

I hate persistent notifications because they block the top of the display when I’m trying to do something else until I flick them away. I always turn that off. (I think Reminders by default are persistent.)

Another reason for this change may be to be consistent between when the phone is locked and when it is unlocked.

But, again, now you know. Flick up when you open notification center.

Most of the time it’s an Uptime Robot or our other monitor app giving a temporary incorrect error and if I wait a couple of minutes I’ll get a “restored” message. So I don’t always jump into the server. However I do usually try to click on the link being reported as soon as I can to see if I see the same thing. Anyway, I’d hate to miss it.

I went ahead and made the most important ones for me persistent.

Persistent isn’t working either. I think it’s a bug.