I must have looked in the Main Library folder/Application Support/ before and of course, it’s not there!

Just curious – why do you want to move it?

I’m not sure if there is anything wrong with moving it, but just to make sure, and since I almost never have a reason to access it directly, I leave it there.

I put mine in a subfolder of ~/Documents, and it works fine. I moved it because I back up ~/Documents more rigorously and to more places than ~/Library, and I definitely want my Quicken data file (and other financial information) well backed up.

My reason is more historical: In 2011, my iMac PowerPC G5 died and rather than try to fix it, I thought it was time to upgrade to an Intel Mac.

I purchased the 2011 Mac Mini without doing much research, and was shocked to discover that OS X Lion no longer contained the transparent Rosetta translation program that allowed PowerPC programs to run on Intel Macs.

At that time Quicken 2007 was, as up until now, very important to me, so initially I ran Quicken 2007 in Snow Leopard in Parallels, until from my research of an Apple user named newfoundglory, discovered how to partition my 2011 Mac Mini and get one partition to boot and run Snow Leopard.

The other partition ran Lion and then Mt. Lion and ultimately I added a 3rd partition for upgrades until it runs High Sierra.

Then in 2012, Intuit made my life easier by releasing a version of Quicken 2007 that ran in Lion and updated it until it now runs in my High Sierra partition.

But for ease of backup purposes, I kept all of my data files in the Mt. Lion partition including my “Accounting” folder that contains data files going all the way back to running Home Accountant on my Apple ][+ and then //c in the early to mid 1980s.

When I briefly had a business corporation in 2000-2004, I also used Quickbooks.

All of my other accounting data files are in this folder and I will move my Quicken 2022 data file there, too.

When it is released later this year, I will bite the bullet and buy the then latest Mac Mini with Apple Silicon CPU and now I will be able to run Quicken on that Mac, too!

OK: I moved the Quicken 2022 data file over to my Accounting Folder, as noted below; trashed the original file and double clicked the moved one to launch Quicken 2022 and open that file.

I used an online update of my only account so far linked to online (American Express) and sure enough the $31.19 charge to Quicken was updated.

A quick quit and relaunch and sure enough Quicken 2022 is opening my moved file now as the default just like Quicken 2007.

Someone above claimed that they used the Quicken 2007 Business Report: Income Statement, which I also use at the end of the year to submit to my accountant for his preparation of my income tax returns.

I find I can recreate this report on Quicken 2022 as follows:

Then in the resulting Report, I go to Edit and change Date Range to Last Year and now I have the report I need. Also, it seems to remember “Last Year” as the default now every time I bring it up. 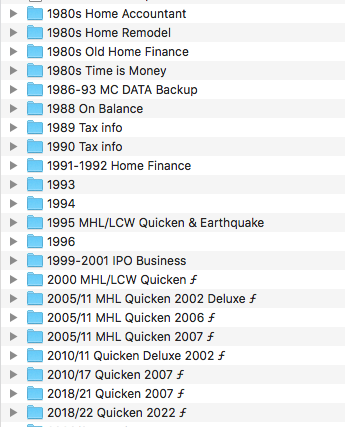 I moved it because I back up ~/Documents more rigorously and to more places than ~/Library, and I definitely want my Quicken data file (and other financial information) well backed up.

My ~/Library folder gets backed hourly to TM and the cloud, plus daily to a rotating set of clones. Also, whenever I finish using Quicken for the day I create a manual backup in ~/Documents, so I have time-stamped incremental backups that way. Overkill, maybe, but I never have to worry about losing data.

I have always kept my Quicken data file on an external drive. Have never had any problem. Automatic backups on quit are in Dropbox. Both destinations backed up regularly to a backup external.

4 posts were split to a new topic: Keeping an old Mac mini going vs buying a new M1 Mac mini

I keep my Quicken files in my main Documents folder of one of my iMacs, which is synced among all of my Macs using Resilio Sync. If I’m careful, and always quit Quicken on the machine that currently I’m working on, I can share the Quicken file safely among all of my machines. I also use Carbon Copy Cloner to separately backup the Quicken folder (including all of the automatic backups), to a USB drive that’s mounted locally on that iMac. Also, the computers that are sharing the file using Resilio Sync are all backing up locally using Time Machine. No problems so far.

Quicken 2007 can run on a macOS system that has an HFS+ or APFS startup volume, and its data file can be stored on either kind of filesystem. But you cannot correctly copy the Quicken Data file from an APFS volume. (It seems to use some outdated package format that relies on HFS+.).

Here is where I lost you. As far as I know, Quicken 2007’s only issue with APFS is that the automatic backup doesn’t work. (The reason is that Quicken is making an incorrect assumption about file ordering on POSIX file system calls. They got away with it with HFS+ but not with APFS.)

Just picking up on the thread after a few months.

Speaking from practical experience, I’ve tried for a few years to migrate my Quicken 2007 data into a newer version. Each time it’s failed. After reading this thread, I copied my Quicken 2007 data to a HFS+ formatted flash drive and was able to successfully migrate the data.

I’m still figuring out how to get the reports I used in 2007 to match in the current version, but maybe I can upgrade beyond Mojave now.

What Reports did you use in Q2007? I was successful in recreating the Business - Income Statement Report.

Also a question to all new Quicken Deluxe 2022 users:

In Q2007, when I type in a Payee that I have used before, it remembers and brings up the last transaction, including the proper Category; so I can just modify the amount, if needed and move on to the next transaction.

But so far in my limited experience with QD2022, if I type the Payee, it remembers only the full name of the Payee and I have to manually add the rest, including the hardest part to remember, the Category.

Anyone with a work-around?

I had same problem. It seems to be fixed if you go to Quicken preferences- register. At bottom, I checked both “automatically create rule” for payee name and “rule when I edit transaction” — all fields

When you type in a payee name that you have used before in Quicken Deluxe 2022, after typing in a few letters it should offer you a list of “Best matches” below to complete the payee name. If it has carried over your categories properly from Quicken 2007, it should offer you a category name in italics below the payee. Click on that combination and it will enter the Payee name and Category you want.

If it does not remember the category, fill in the payee name and hit Tab to get into the Category box. Then it will offer you something like “Uncategorized” as a category name and above it include a blue box with a place to check followed by “Save Quickfill rule for this payee with the category” entered below. Replace “Uncategorized” with whatever category you want, check the box, and it should enter it automatically every time you use the same payee if you follow the procedure in the preceding paragraph.

If you are entering information by downloading from a bank or other financial institution, Quicken 2022 will pick up the category supplied in the download. Odds are that won’t be what you want and you will have to change it.

If you want you can also use the blue box’s dropdown menu to tell Quickfill to save all fields in the transaction, including category, tags, memo, and amount.

In Quicken 2007, I would manually download my American Express and Citibank MC and Visa cards transactions manually from their website to then manually Import into Quicken.

Originally these financial institutions supported downloads as QIF, but some years ago abandoned that.

So then I would download as CSV and use Moneythumbs’ CSV2QIF converter to provide me with the necessary QIF file for Quicken 2007 to. import.

Now with the new Quicken 2022, I have experimented with auto-update on my two AmExp cards and I am happy so far.

But I still want to manually import transactions for my two Citicards.

I do notice that Citibank also allows me to download as QFX, QBO or OFX formats, but I have no experience with these formats.

QFX is basically Quicken 2022’s version of QIF, so that should work. I use the QFX file Apple generates for my Apple Card to import those transactions into Quicken.

I do notice that Citibank also allows me to download as QFX, QBO or OFX formats, but I have no experience with these formats.

Ever since QFX format was introduced, I’ve used it to manually download my credit card statements to my checkbook program (first Quicken and now Moneydance). With the exception of some coding issues with Citibank many years ago, the processing was smooth, with me only needing to change some transaction categories to my own custom categories and merge the preexisting payment transaction with the incoming on from the statement.

Is this where I would Import the recent month’s QFX data? I am fearful of losing my complete history of a credit card file in my Quicken if I make a mistake: 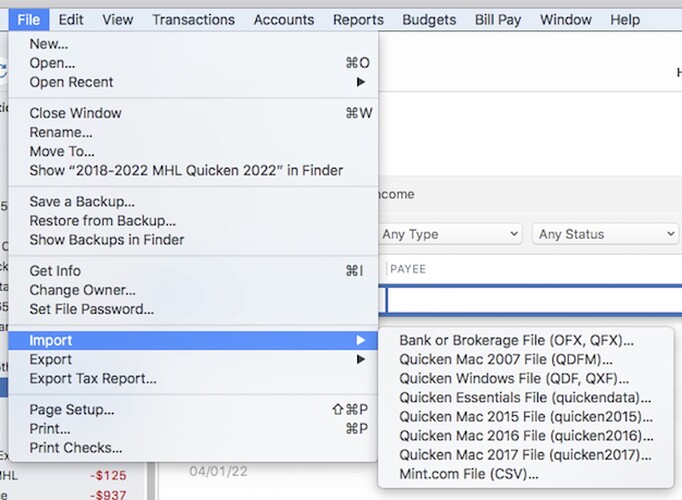 I would imagine Bank or Brokerage File would do it, but I’ve always just double-clicked the QFX file which runs Quicken (or brings it to the front) and does the import. You could make a copy of your data file and then try it (or just restore from a backup if things go awry).

I agree. It took about 6 months to find the rhythm. There’s more data above the Reconcile listings than with Quicken. For one thing, a quick check of the Deposit list in SEE and the Deposits and Other Additions on the bank statement to see they agree and that’s done.