I love the new Studio Display, which I have cabled via Thunderbolt to a Mac mini M1, running Monterey 12.5.1. My problem is that Dictation starts with a keypress - (little mic icon pops up) but It ignores my voice. The Studio Display has the latest firmware update.

The mic works fine in Zoom, Office 365 dictation, etc. It’s only in Mac OS (Siri, dictation) that it doesn’t work. It SOMETIMES works when the Mini is first booted but then quits in a minute or two.

In System Preferences > Keyboard > Dictation, I see a drop-down menu beneath the microphone icon (see screenshot). I seem to have “Automatic” selected (by default). I wonder if choosing a specific microphone here (presumably the mic in the Studio Display in your case?) might help. 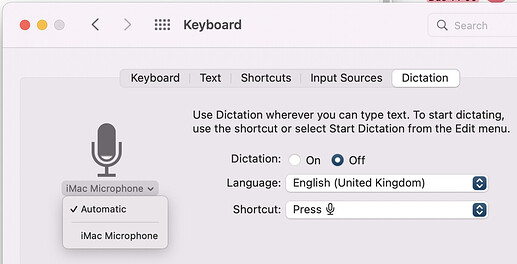 Yep, tried that too (but forgot to mention it).

yea, i have the same problem in macOS Ventura. Dictation/Siri doesn’t work sometime. My workround is to reboot the Studio Display. This works for me. But it is so annoying.

I gave up and bought a Blue Yeti external Mic. Solved but still annoying.