For months I’ve been having a similar problem creating PDF files from emailed TidBITS issues. (Apologies if I should have started a new thread about this.)

For years I’ve been using Mail to create PDF files from emailed TidBITS issues. Most of my reasons for doing this are no longer relevant, but there’s one benefit that I still enjoy: I can import the PDF file into the iOS GoodReader app and have that app keep my place in an issue as I read it over several sessions.

This worked fine until I replaced my Mac some months ago with one that could run Ventura. With that Mac the resulting PDF file, whether created using the “Export” or “Print” menus, would have almost all graphics replaced with outlined rectangles. (Yes, I’m careful to invoke “Load Remote Content” first.)

For a while I could forward those emails to an older Mac running Big Sur and create the PDF file there. But a recent update has introduced the same problem to that version of macOS.

Can anyone suggest a way around this? Thanks.

If you’re happy forwarding the email to do the conversion, you could try pdfconvert.me.

Welcome to pdfconvert.me pdfconvert.me is a free email service which will take the content of a message and return that content back to the sending …

I tried it with the 9 Jan issue. It worked fine except for a glitch several pages in: 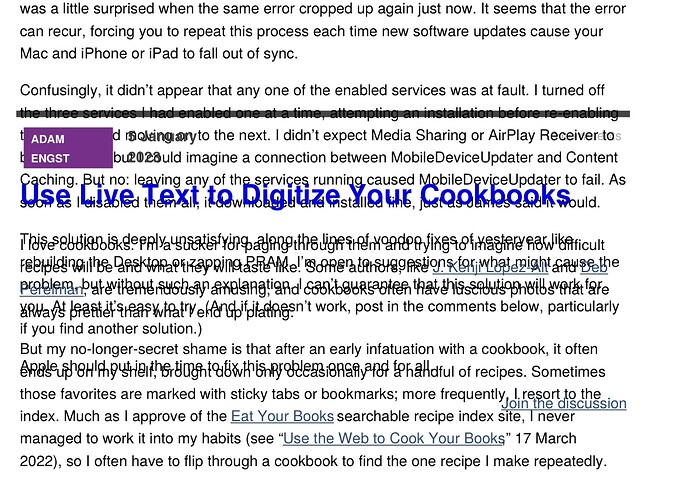