The combination of the discussion about MagSafe vs USB-C mandate and getting a new iPad with USB-C has me pondering how people clean lint and fluff out of these ports. The Lighting port on my iPhone is simple to clean – get out my electronics tweezers, stick one side in, and fish out all that fluff. But because USB-C has a imbecilic design*, the ‘socket’ on an iPad and future iPhones is actually a plug in a well. So you can’t just stick some tweezers in, because in the middle of the port the pins are sticking up, and I wouldn’t want to break them. It seems far less robust for cleaning than Lightning.

So how do people clean USB-C ports? Presumably this is an issue with Android phones that are kept in pockets. Does anyone here have any tips?

* The industry learned in the 70s & 80s not to put a connector’s pins on the machine and its socket on the cable. If you do that, then if the pins break you have an expensive problem. But if the pins are on the cable and they break, you can just replace the cable. I have no idea why USB decided to ignore this common sense approach and instead make a plug that looks like a socket (the bit in the computer), and a socket that looks like a plug (the bit at the end of a cable).

Those “pins in the middle of the port”, they’re what prevent lint and junk from getting in there in the first place. Unlike my iPhone, I have never had to clean lint out of any of my USB-C receptacles.

But USB-C is more prone to expensive damage.

If your phone drops on the port while a Lightening cable is connected, the typical damage is that the connector snaps off the cable. You can easily pull it out of the phone and get a new cable.

A similar drop when connected to a USB cable (whether a mini-B or C connector) tends to cause the connector in the phone to get damaged. Which means either taking it to a repair shop that can do the microsoldering necessary to replace the connector or sending it back to the manufacturer for a motherboard replacement.

Do you keep a USB-C device in your pocket?
(Not the intent to sound snarky with this question).

That’s trying too hard. By the same token, the back of the iPhone should be plastic, not glass. And yet, here we are. If that added risk to an item I cannot afford to drop anyway is the price to pay for being able to use any standard charger and seeing >480 Mbps transfer rates, sign me right up.

Sure do. That’s basically where my AirPods Pro lived. Until I had to replace them with a pair of work-issued buds that came with USB-C. Now those buds stink, but the USB-C receptacle has never needed cleaning.

Neither does the USB-C receptacle on a little flashlight I also usually carry around in my pocket.

I give my iPhone and iPad a blast of condensed air in their ports every so often, and so far it has done the trick. I’m also very careful about keeping them away from dust and grime. Just very carefully hold the can sick straight, because some manufacturers do use liquid in them that can leak out. My handbags have dedicated compartments just for my iPhone, and I stash makeup and anything else that could become messy in a removable, liquid proof, zippered pouch. My iPad has its own zipper bag.

My husband bought a set of little USB plugs from Amazon awhile ago because he keeps his iPhone in his pockets. They are easy to use, but they are also easy to loose. And I’ve known people who tried cleaning ports with Q Tips or toothpicks that were dunked in alcohol, but a lot of them of them ended in disaster.

What makes you think that the shape of the connector has anything to do with the data rate?

Why Apple has not decided to deploy these speeds on other devices is something only they know, but it has nothing to do with the shape of the connector.

Of course it has nothing to do with shape. But it quite obviously has something to do with exchanging Lightning for USB-C. See what it did for the iPad. The same will happen with iPhone when it finally gets it. AFAIC, Lightning cannot disappear fast enough.

If your phone drops on the port while a Lightening cable is connected, the typical damage is that the connector snaps off the cable. You can easily pull it out of the phone and get a new cable.

We had a couple of cheap Lightning cables where the tip of the connector snapped off, in one case deep enough into the iPad’s Lightning port that we had no way to get it out. Made a Genius Bar appointment, and they were able to dislodge it, but they warned me that they were lucky to be able to get it out easily and if they hadn’t, it would have been an expensive repair.

I threw those cables away, but I’m not convinced that the Lightning connector is any less likely to produce expensive damage than are the alternatives.

Not sure why you get lint in your ports and I don’t… I don’t wash my jeans any more often than most guys (i.e., not very often). Maybe it has something to do with the sleeve I made for my iPhone (in addition to the regular rubbery case that covers its back, and the plastic screen-protector that covers its front). The sleeve is made out of a couple of pieces of flexible plastic taped together, and I slip the phone in there before sticking the whole thing in my pocket. Honestly I never even thought of lint, I made it to prevent my phone from getting scratched by my keys, which are sometimes hanging down into the same pocket from a short keychain clipped to my belt. But I guess it might prevent the lint issue too.

I do remember, however, from the old days when mouse balls (remember them?) would get linted up… if you do this dry-your-mouth thing into the back of your throat before blowing air from your mouth into a crevice (like a port), you should be able to do so without getting an appreciable amount of moisture in there.

And if worse comes to worst… my vacuum cleaner has a nozzle attachment, and I made a narrowing device for it out of a drinking straw that can narrow the nozzle even further.

(You can tell I like to make things.) Good luck with your lint. 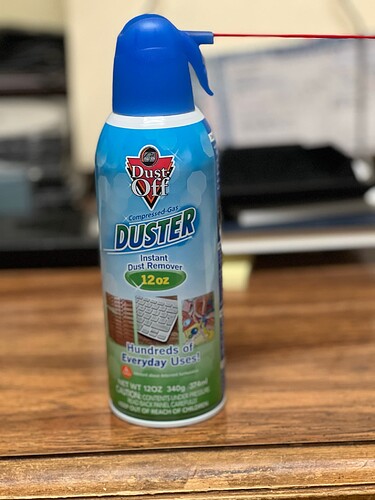 Now those buds stink, but the USB-C receptacle has never needed cleaning.

That’s good to know. Maybe it won’t be an issue, even though looking at the port there seems plenty of space for lint to wander in!

There is definitely still space. But it’s smaller and I suppose that must help just enough. At least for my kind of pants (usually dress pants, rarely jeans).