Apple has finally rolled out its Universal Control feature for Macs and iPad, albeit in beta form, and newer iPhones let you use Face ID even if you’re wearing a mask. Its latest operating system updates offer a variety of other enhancements, bug fixes, and security fixes.

macOS 12.3 release can’t find my custom printer profile for my Canon Pro-10 (xRite iStudio - now Calibrite), but otherwise no problems here (the release is the same build as the public beta from last Tuesday).

The profile is overdue for recalibration. I’ll see if that helps.

Has anyone seen anything specific on the error rates—most interested in false positives—for FaceID with a mask vs. regular FaceID?

I can’t get FaceID with mask to work. First, it won’t let me setup when I’m wearing my glasses. If I take my glasses off and set up then I can’t use FaceID to unlock my iPhone. Finally I just reverted back to the way it was.

I think I remember that a TidBits contributor (maybe @jcenters?) uses Indigo. It’s a shame they waited so long to make the transition from Python 2 to Python 3. On one hand it’s easy to say they had plenty of warning so it’s their own fault that 12.3 breaks their program, but on the other hand it’s really hard for such a small development team to figure out how to prioritize tasks. I can sympathize with feeling the Python transition is a lot of time and effort for a lateral move.

It actually isn’t necessary to transition to Python3. The simplest fix is to simply include a copy of the Python2 files necessary to keep Indigo running. That’s what Apple has been recommending to Developers in anticipation of this move for months now.

Entirely intuitive, on my MacBook Pro, without thinking, I just swiped over to my iPad and was controlling it when I realized I was using the MBPro’s trackpad.

Honestly I have to rethink… I can sit on my laptop, swipe over to my multi-monitor desktop and then back to my iPad. It feels like I have a five screen setup here.

I came back after a while and hit Cmd+Space to launch spotlight on my Mac and I was still ‘on’ my iPad, saw the spotlight bar pop up there. This will all need some getting used to.

According to the developers, simply installing Python 2 doesn’t work for Indigo. I haven’t tried to figure out why.

Just one data point here – I installed iOS 15.4 on my iPhone 13 this afternoon, and was able to unlock with Face ID while I was wearing a mask!

I think I remember that a TidBits contributor (maybe @jcenters?) uses Indigo. It’s a shame they waited so long to make the transition from Python 2 to Python 3. On one hand it’s easy to say they had plenty of warning so it’s their own fault that 12.3 breaks their program, but on the other hand it’s really hard for such a small development team to figure out how to prioritize tasks. I can sympathize with feeling the Python transition is a lot of time and effort for a lateral move.

Not me! Rich Mogull uses it and I’ve probably mentioned it before.

According to the developers, simply installing Python 2 doesn’t work for Indigo. I haven’t tried to figure out why.

I’ve had this problem in Linux, and what usually happens is if you have Python 3 installed an app written in Python 2 tries to call the Python 3 library and either you or the developer have to change something so it knows the right thing to look for. It’s infuriating.

There is something new for Apple Watch and iOS 15.4 and watchOS 8.5, as reported by 9to5mac. Prior to now, if the Apple Watch had a failed flash during an upgrade, it could only be put into working order by Apple. (This happened probably more to people running the developer betas than people running stable releases, but it does happen to people sometimes.) Starting with iOS 15.4, you can now try to fix issues with watchOS flashing with an iPhone yourself. 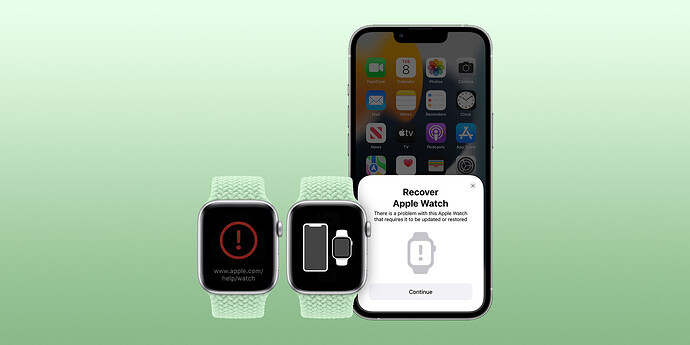 Apple Watch firmware can now be restored from an iPhone running iOS 15.4

And Apple has an updated support article:

If your Apple Watch shows an iPhone and a watch or a red “!”

Your Apple Watch might show an animation asking you to bring it close to an iPhone if your watch experiences a problem that requires it to be updated or restored. You might also see a red exclamation point on your watch.

I didn’t mean that the user needs to install Python2 (although that should be able to work, as well), the developer needs to embed whatever Python2 files it requires within the app.

If you enable the mask-friendly variant of Face ID, you will, of course, be creating a new Face ID profile. If you have Face ID enabled for an app, you may need to sign in with a password and then re-enable Face ID.

I’ve installed OS 12.3 on my M1 Air and Mini. No untoward effects, so far. The Universal Access beta works as advertised, although I’m not yet sure what I’m going to do with it . . .

5 posts were merged into an existing topic: Third-Generation iPhone SE Is Another Great Bargain

updated my macbook and my ipad (universal control is kinda cute but not entirely reliable).

mind, just switched carriers and have yet to cancel the previous one (so i’ve got two sims at this time: e-sim and sim). so that may be screwing something up.

Don’t kill it. My iPhone 7 needed more than 30 minutes, though I don’t really know how much longer as I just let it sit.

It’s been a mystery for some time what goes on during “Preparing update”. Clearly the download is being expanded at this point, but I’ve never known anybody that could explain what else is taking place.

I don’t believe your SIM situation would have anything to do with the delay, but anything is possible, I suppose.

thanks for the advice. it took over 50 minutes but finally installed. and now in theory i can unlock my phone whilst muzzled.