Today while driving, I randomly asked Siri to play something from a band as I couldn’t remember their hits. Imagine my surprise when she replied “Here you go and enjoy 7 days of Apple Music on us”

I don’t want Apple Music and cannot believe I invoked a subscription service by asking to have music played that’s not in my music library.

Where do I cancel this?

Based on the second picture (this screen appeared after I x’d out the first one) I guess I commanded “Listen Now”? Will these all go away in 7 days if I don’t ask to continue the subscription? Because I can’t find a way to turn them off. 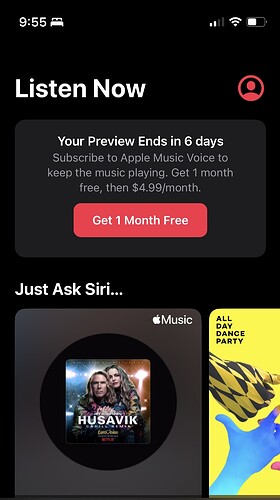 Settings, then your profile, then Subscriptions. If you really are subscribed it’ll be in there.

Oh, that’s really annoying and super bad design. Not even a confirmation dialog before activation? Jeeze. Apple must be really desperate for “services revenue” if they’re stepping up such Comcast-esque sleazebaggery. Shameful.

Sorry to hear about your trouble. Hope you can easily cancel via subscription settings. Perhaps give them some feedback too — along the lines of lost a potential customer forever.

Back in the day used car salespeople were considered the uber menace of all evil, and then at some point that became lawyers. Looks like these days the marketing folks are eager to grab that torch.

Settings, then your profile, then Subscriptions. If you really are subscribed it’ll be in there.

It seems, though, that you got a 7 days “preview” and not a subscription with the first 7 days for free.
I find it a good opportunity for you to test Apple Music for free.
So, I guess you won’t find any trace of it under the Subscription tab.

Thanks! I was looking in the Music app since that’s where those screenshots were. It’s Apple Music Voice that’s activated and it’s saying I’m in preview mode.

Next question - how do I turn that off permanently? Is asking Siri to play something going to default to this Voice product instead of my actual music library?

It didn’t even ask me if I wanted to do this.

I had tried Music a few years ago and it played havoc with my own ripped collection. I cancelled it after a few months, but on the point above, sometimes I will request a song in my library from Siri, but it plays music that I do not own, probably from the Music collection. I don’t know it seems to do that randomly, but I was never put back on the -lab or billed. Maybe I’m still connected to that from the past subscription?

Has this happened to people who have never had Music subscription?

I have had songs show up in my library that I never added. I can only suspect that the album itself changed and a sync along the way added the new songs. I remember this happening with the Anchorman soundtrack - I added it in 2005 and a new song showed up in 2019.

I seem to be in a trial for Apple Music Voice, which is a separate subscription.

Has this happened to people who have never had Music subscription?

I, for one, would be very afraid to find out, because by testing I might get caught in the same trap. I had no interest in Apple Music anyway, but this potential issue will keep me miles away from it. And Siri. Talk about rude…