With the Trackpad-Equipped Magic Keyboard, You Can Use an iPad Pro Like a Laptop

The Magic Keyboard for iPad Pro is Apple’s first iPad cover with an integrated trackpad, and it also features a revised keyboard, a rugged hinge with a built-in USB-C charging port, and a new docking system that holds the iPad in the air. It makes the iPad Pro into more of an alternative to a laptop than ever before.

By all accounts it really is a dock, too heavy and stiff for toting on the sofa.

As the owner of an Air v3 I’m curious as to how the Logitech Combo Touch ends up performing. I’m a fan of their keyboards. It’s also 150 bucks as opposed to 350 bucks. 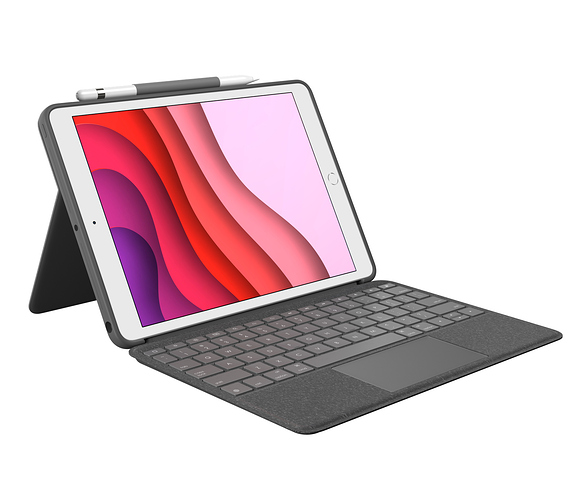 Thanks for the review. The Magic Keyboard configuration blocks access to the space up to the hinge, while the Brydge (photo) can utilise that space and it does so by putting in an extra row of keys and a somewhat larger trackpad by shifting the entire keyboard toward the hinge.

This review reaffirmed me in my decision to go with the Brydge. My main motivation was that I need a Hand-e-Holder on the back of my iPad. The bluetooth connection and current state of the Brydge trackpad are indeed minus points. But I have been using a Brydge with my iPad Air 2 for years and have been very happy about it. I like the Brydge keyboard layout better. The trackpad will get firmware updates through an app in the near future, I’ll have to see how that works out.

It´s not a laptop. Myn macbook 12" is, and a lot lighter and thinner.

I’d be interested in how well the Brydge works. Let us know.

I looked at getting one whilst waiting for the Magic Keyboard but only US English layout is available so that made it a no no from the beginning. A return key in the wrong place makes for an unhappy life.

Why would I want to step down to an iPad when a MacBook is so much more robust and convenient? I have had iPad’s with keyboards and tablets with keyboards and it wasn’t long before the keyboards ended up in a drawer with the previous add on keyboards. I don’t see the purpose. Particularly when I have a MacBook Pro with way more power and capability.

Besides a number of specific iOS/iPadOS apps the stand function is a major part of the equation for me.

For example take a look at these two short presentations: “Phosphorescence_and_Fluorescence” and “Scintillation_in_CCD”. Give the movies time to load.

When I have to do typing the keyboard function is so much better than the on-screen keyboard, for me anyways.

I compared the keyboards:

The differences are acceptable to me. The only specific Dutch key (found nowhere else) is [ § ] in the upper left corner of the MBP keyboard. As I don’t do legalese or documentation formatting I rarely use §.

From the photo material on the Dutch Apple Store I am led to conclude that Apple’s iPad keyboards are US only in layout, so no § there too. Or maybe they didn’t bother using Dutch photo material here? That would seem un-Apple to me though.

The country specific keyboards used to be a gripe at Apple back in the day when they discovered that in most countries by law manufacturers of computers had to conform to country standards. This resulted in having to make hundreds of slightly different keyboards, but that is what they do today.

Maybe there is a legal difference in keyboards that are being sold as an integral part of the computer set and those sold separately like an iPad keyboard, allowing them to get away with US-only layout for the latter.

Paul
I am more impressed with bioluminescence, but I don’t type much. I do edit film, video and audio in 4k and 1080p. My iPad and tablets just don’t have the capability to do that well. Maybe when an iPad has a powerful processor and 16 or more GB of RAM, it will be more useful. Thank you for playing.

Ah, yes! One of nature’s most fabulous phenomena.

I once backed a kickstarter project from a US hobby company that would produce a bioluminescent plant, of which you would receive a small bag of seeds. Regulations thwarted the undertaking in the end though.

ANGLE:
why on Earth would Apple be un-pro, incomplete about the 90-130° angle limit, it is frustrating to not be able to view at angles beyond 130° for certain case uses.

PRICE:
also, is €450 not quite exaggerated, priced as much as an entirely independent product such as iPhone SE, and for just lit keyboard with angle, ok incl. tiny trackpad, not to mention amidst pandemic economy?

why on Earth would Apple be un-pro, incomplete about the 90-130° angle limit, it is frustrating to not be able to view at angles beyond 130° for certain case uses.

John Gruber wrote about this on Daring Fireball:

Here is the iFixit X-ray of the Apple Magic Keyboard, corrected for colour and flipped horizontally. 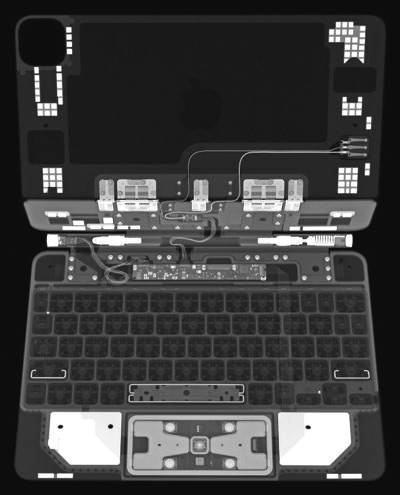 I finally got my hands on the Brydge Pro+ keyboard for my iPad Pro 12,9" (delivery took a bit longer than expected). When I saw the carton packaging at delivery, I knew that is was a bit smaller than the iPad, so that was weird. Turned out the actual Brydge box fitted diagonally in there ;-). The box is perfect BTW.

And so is the build quality of the keyboard itself, top notch all the way. More on that in this video from AppleInsider, I should’t repeat that here.
There is also an AppleInsider video comparing the Brydge and the Apple Magic Keyboard.

I weighed the iPad and the Brydge and these were the results (give or take a gram):

Although the Brydge is 50g lighter than the iPad, the combo never tips backwards at angles approaching 180º, although of course it noticeably wants to if you touch the screen. At 130º there is no problem. In my case it can’t go more than about 165º on a flat surface because of the Hand-e-Holder on the back of the iPad. 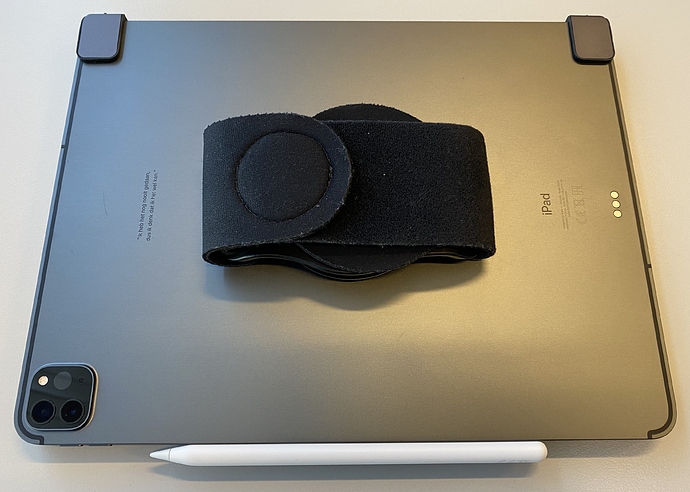 I use the Hand-e-Holder for holding my iPad instead of having to grab its sides. It allows me to do presentations while moving about in a classroom or a lecture hall.

For protection I use the Prop 'n Go sleeve I originally purchased for my 2016 MBP 15". It has thick padding and accommodates the Hand-e-Holder bulge nicely. It fits perfectly in the sleeve slot of the Brenthaven backpack I got for the 17" TiBook back in the day. These days I believe Brenthaven has integrated the sleeve in their backpacks, so that wouldn’t work anymore.

Coming from an iPad Air 2-with-Brydge combo this new set makes for a HUGE difference, literally as well as figuratively speaking.

But concentrating on the Brydge part:
The keyboard is a fraction bigger in overall size than that of the 2016 15" MBP, including the touch-bar. It feels great, better than the old Brydge I was used to, and that was already excellent. The light bleed here is much less than with the old Brydge, where it could be distracting at times as the bleed at shallow angles would be brighter than the characters themselves. Now it’s nice to see the faint contours of the keys and not just the symbols on them. Personal preference of course.

When you start typing, at first there is a brief lag in which the Brydge connects to the iPad. When you pause typing for a while it will disconnect again, in order to save Bluetooth energy. Keyboards that utilise the iPad Smart Connector don’t have that. It would have been nice to be able to adjust the disconnect lag a bit, but when you’re used to it it’s not problematic. It just comes with the territory.

I love the top row of dedicated keys for controlling various functions of the combo. Too bad the Magic Keyboard doesn’t have that.

In my case I’m used to opening the combo by grabbing the Hand-e-Holder at the back and lifting the iPad that way. With the iPad Air 2 that was virtually the only way because that corresponding Brydge didn’t have a facet like the MBP to enable you to get your fingers between the body and screen. This Brydge has that facet (and no sharp points as opposed to the MBP) so it opens like the MBP. Still I find grabbing the Hand-e-Holder more convenient.

The hinges are better than the old Brydge had. There the iPad could move sideways in them. Here the iPad is fixed perfectly in the middle.

The Brydge trackpad remains less functional than the one on Apple’s Magic Keyboard for now. Scrolling is somewhat jerky, moving the pointer is not. Brydge has an iPadOS app out that will update the firmware of the keyboard and trackpad. They are however partly dependent on Apple for updating it’s iPadOS in order to be able to better match the trackpad to it. We’ll have to see how that works out in the near future. As it is now, I’m already happy with it.

I made a minor modification to the Brydge (as I did to the old Brydge). It has two rubber buffers for preventing the iPad screen touching the keyboard. I put two thin felt patches on the edges of the keyboard, which in my opinion do the job better. 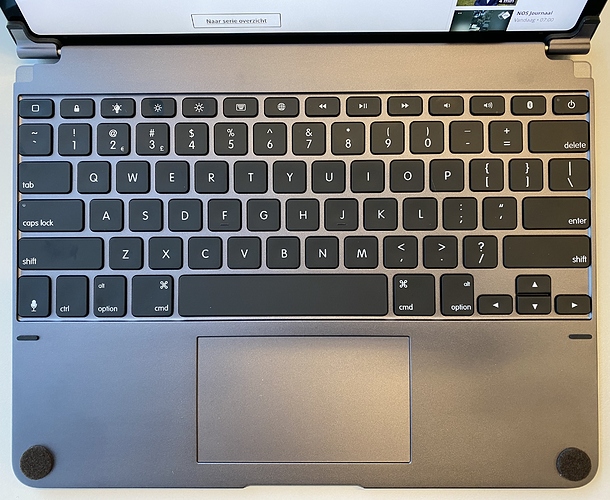 So it looks like I’m set for years to come, happy camper here ;-). 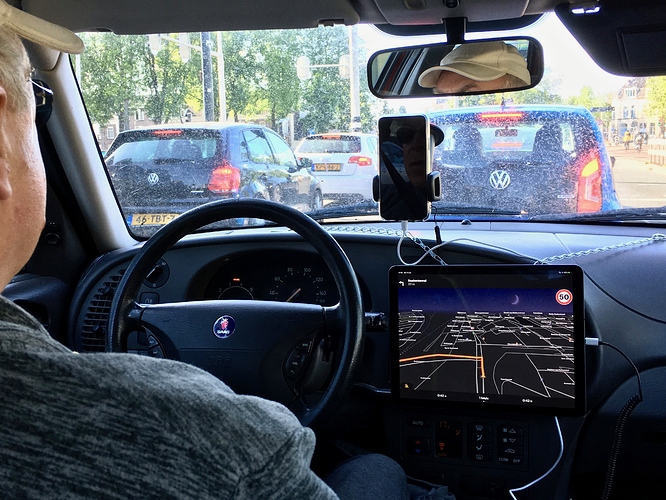 The iPhone takes care of the internet connection for the iPad.