Why Analysts “Believe” in Apple TV+

Originally published at: Why Analysts “Believe” in Apple TV+ - TidBITS

Apple TV+ has a small library and relatively few paying subscribers compared to competing streaming services, but thanks to a high-quality assortment of programs, analysts believe that Apple will be a major player in streaming.

I think Apple is going to have to rethink its strategy if they want TV+ to become an effective loss leader. Apple spent $6 billion just to launch the service, and has been spending billions more to develop more content. And The company that sold hundreds of millions of iPhones, etc. in the last quarter did not even include TV+ subscriber results in their latest earning call:

““ * Apple TV+ subscribers: ? (No updates given during second-quarter earnings)

Apple’s free one-year trials to Apple TV+, which it gives away with new hardware such as iPhones, are now starting to expire for many customers, which could spur the company to offer an update on its next earnings call.”

But they did announce significant growth in Apple TV sales: 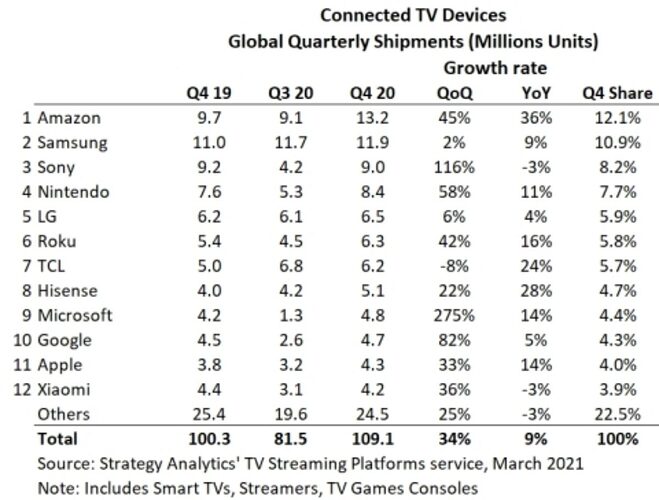 Global sales of connected TV devices soared to a new record in quarter four of 2020, reaching 109.1 million units, according to the latest research from

Apple gives away Photos, Pages, Numbers, Keynote, Wallet and some iCloud storage etc. for free because the are effective loss leaders. TV+ programming costs a lot more, probably billions more, to develop and stream, It needs to be frequently replenished with new content, and programming and talent ain’t cheap.

Disney launched its streaming service, which costs a lot more, about the same time as Apple. And Disney reports their numbers:

The jets kept firing for Disney Plus, which reached 103.6 million subscribers worldwide as of April 3, the company reported — although the growth was not as torrid as Wall Street hoped. The M…

Disney has a humongous catalog, with lots more stuff in development. And TV+ has about 50 shows? When Apple launched iPod, they made sure they had plenty of content lined up in iTunes. And Apple changed the music world. They should have been smarter with TV+. I think MoffettNathanson has a better take on the TV+ situation: 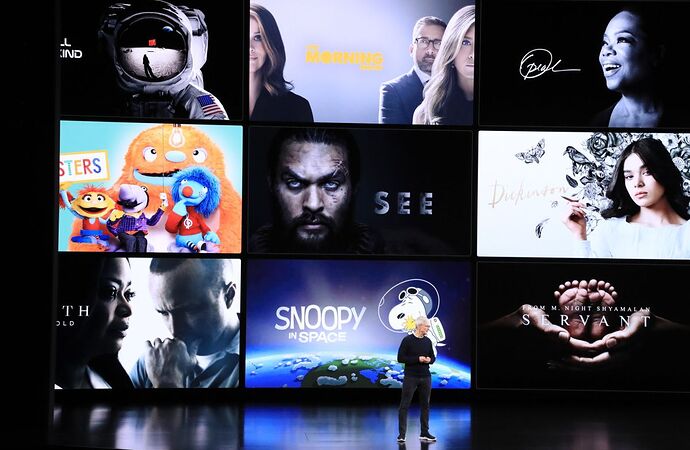 Apple TV Plus Should ‘Reconsider’ its Options: MoffettNathanson

It may indeed be the case but it’s become our goto, We’ve barely touched Netflix lately, Hulu only occasionally, Disney is my daughters weekend fix and HBO Max holds a steady place for the rest of us.

But mostly it’s Apple’s TV app we launch, both as a vehicle to other apps and the marketing around TV+ shows means they are a steady part of our viewing, including the latest Foundation.

I know I’m coming late to this, but the only thing good about Foundation is that it’s motivated me to find my copies of the Foundation trilogy and start rereading them after about 50 years. The show has little to nothing to do with the books, which are much, much better. I may not bother with the rest of the show. As for the rest of TV+, I like Ted Lasso, watched the first season of Morning Show (meh, haven’t bothered with season 2 and may not), can’t stand alternate history (so no For All Mankind or Man in the High Castle) liked the WWII movie whose name escapes me at the moment. Not much for me on TV+. Mostly it’s HBOMax these days (currently Titans, Doom Patrol, and I’m rewatching South Park), Star Trek: Lower Decks on Paramount+ and eventually new seasons of Picard and Discovery, looking forward to The Boys and to see how Amazon butchers the LoTR universe, and of course The Witcher on Netflix.

Perhaps the Foundation books (which have all been devoured by my offspring at this point too) have faded to their main elements in my memory and the divergences in plot are not that clear to me so it didn’t matter to me. But we are loving Foundation, an extraordinary spectacle in every shot, they took it on and made it their own, the pacing and performances pitch perfect. Hats off, not an adaptation that was ever going to be easy.

The Morning Show is an odd one. The production values are high, the actors are good, the direction is actually good, but the scripts… they’re so bad, everything flounders as a result, it’s a bit of a train wreck but oddly compelling as a result. Season Two continues in the same vein… We call it The Expensive Show.

You’ve probably heard it elsewhere but For All Mankind is actually very good, smart and thoughtful television, a subtle critique in the guise of alternate history.

Discovery had emerged as my favourite Star Trek up until the last series which seemed to lose its way. The sheer brilliance of the first seasons has not been continued. The writer’s room is a mess according to the trades but I live in hope… Picard is a slow burn but solid, can’t wait for the return of Q this upcoming season.

LoTR, I don’t know. I liked the films, but didn’t watch the Hobbit trilogy but my lot all ate them up, and the films form a marathon day in this house every Christmas, so I dare say the show will feature highly here.

There was no weird monolith on Terminus, for example. Dornick wasn’t spaced in a pod. Asimov’s universe was distinct in that there’s no intelligence besides humans (or as we discover much later when Asimov tied his separate series together, the robots that humans built were still around and important). I was disappointed in the end of the trilogy in that it was the woo woo crowd in the Second Foundation that turned out to be the important ones. John Campbell had an immense influence on SF, but it wasn’t all positive.

Discovery solved the problem of “why doesn’t anyone in previous series know about Burnham or the (ridiculous) spore drive?”. Now they’re free to do whatever they want. I’m looking forward to the Pike/Enterprise show.

The Hobbit movies weren’t that good, especially the last one, which was basically just a giant (and boring) CGI battle. One movie would have been enough.

The Hobbit movies weren’t that good, especially the last one, which was basically just a giant (and boring) CGI battle. One movie would have been enough.

They took a thin, tightly paced book and turned it into three extremely long movies and the result was thin, sort of stretched, like butter scraped over too much bread

They took a thin, tightly paced book and turned it into three extremely long movies and the result was thin, sort of stretched, like butter scraped over too much bread

This is true, and the Foundation story spans many centuries and they are loaded with interwoven plot lines and characters. There is so much well written stuff, and well over 100 finely woven lead characters, and the details about plot and characters are what holds everything together. It would probably take over 100 hour+ episodes to just scratch the surface. And a huge cast of excellent actors, along with very expensive pre, production and post work would be required.

I see what you did there.

I know I’m coming late to this, but the only thing good about Foundation is that it’s motivated me to find my copies of the Foundation trilogy and start rereading them after about 50 years.

If it’s been 50 years, then you may be unaware of the fact that Asimov wrote several additional novels after the original trilogy. In publication order:

The later books also contain material that ties the Foundation universe to other Asmov series, including the Galactic Empire series and the Robot series.

Have a good read. I’ve read and loved all these novels.

Not only know about them but read the sequels all when they came out. (The original trilogy was before I was born.) I know full well that R. Daneel Olivaw was behind everything.