Where is the new iOS 14 Photo Picker?

For me, the most anticipated feature of iOS 14, its crowning jewel, was going to be the new, searchable Photo Picker. Any of you with huge photos libraries and who like to find and share random photos from the past know how that is effectively impossible from an iPhone. Unless I’m willing to scroll through 100,000 photos to find the one I want to share, I need to be able to search based on Keyword, Date, Place, or some combination of metadata.

The photo picker we have had up until now has been unsearchable, and the only relief from a completely flat stream of photos to scroll through has been Albums, that almost no one uses anymore. iOS 14 was supposed to fix that.

And it turns out that it’s available in Mail, Messages, Notes, and presumable all the Apple apps, which is great. Here’s what it looks like in Mail:

And lots of 3rd party apps like YouTube, Dropbox, LinkedIN, Twitter, Reverb, Chrome, Google Photos, Gmail, Amazon, and OfferUp have it working. Google Hangouts also has it, hiding behind an icon. But some of the apps I most need this feature for: Facebook, Facebook Messenger, WhatsApp still leave me the old, lame, nearly-useless photo picker:

Since all these are owned by Facebook, do they have some policy (or laziness) that is preventing this from being adopted? I thought they were just using a built-in API that would be automatically upgraded in iOS 14. I tried deleting the FB app and reinstalling it, in case there were something that needed re-initializing to fix this, but no dice.

Does anyone else have any insight into what’s going on here?

Since all these are owned by Facebook, do they have some policy (or laziness) that is preventing this from being adopted?

Have they been updated since iOS 14 shipped? That’s the main thing I’d look for. But it could just be laziness or incompetence on Facebook’s part too.

Have they been updated since iOS 14 shipped?

Yes, all three were updated in the last week. 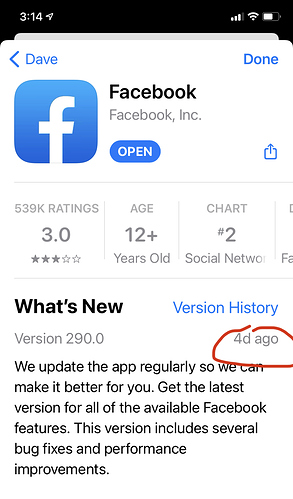 They’re too busy trying to stamp out QAnon to do any development. Which, in the scheme of things, I think I approve of.

They’re too busy trying to stamp out QAnon to do any development. Which, in the scheme of things, I think I approve of.

If that’s the case, I can wait. I’ll give them another week LOL.

A friend shared a video of himself playing guitar, and asked me to return the favor (we used to jam together). I was using FB on my iOS 14 iPhone. Here’s how it went down:

So this is yet another layer of FB annoyingness (<-- yes I just created this word, and they deserve it).

And it raises the question of whether the problem will still exist when or if FB ever implements the modern, searchable photo picker: will they still block videos in mobile replies?

Why do they have to make life so friggin difficult?? This has to be the most well-funded and certainly the most popular app on the entire planet.