What's up with Track Changes in Microsoft Word?

Since upgrading to Big Sur 11.6.3, I noticed that Microsoft Word no longer shows a toggle switch for Track Changes. I don’t know if this is a coincidence.

On my Word installation (16.57, installed via an MS365 subscription), it is there, but I think it moved. It’s part of a “Tracking” group (red box) on the “Review” ribbon. Note that it is separate from the “Changes” group (blue box). I think the two used to be together.

The “Track Changes” button is behind the “Tracking” icon:

… unless your window is wide enough for Word to expand it in the ribbon:

Since upgrading to Big Sur 11.6.3, I noticed that Microsoft Word no longer shows a toggle switch for Track Changes. I don’t know if this is a coincidence.

I think it’s a Word change, not something in macOS. However, this threw @tonya recently too. I don’t use Word much these days but now that I check, I’m flabbergasted at how confusing this interface is. There are actually four possible states of the buttons associated with track changes, depending on how wide your window is, and the amounts that you have to change the window width to trigger each change are quite minimal (click each image to zoom):

There are numerous problems with what Microsoft has done here:

I see what Microsoft is trying to do here, and in some sense, I applaud their ingenuity. There’s a huge amount of functionality crammed into these controls, and Microsoft chose to make them less inscrutable as the window width increased and more room for clear interface controls becomes available.

But here’s the thing. Tonya is a Word power user. Long ago, she worked at Microsoft in Word tech support for several years, and she groks Word at a deep level. In her current job at Cornell, she spends hours every day in Word. If this interface can throw her for a loop (and it has), less experienced Word users have no chance. Button names changing; controls that combine action buttons, toggle buttons, and menus in the same icon; button sizes jumping around—I wouldn’t blame any user who couldn’t figure it out.

So once again (as with Focus), I think we’re in a situation where the amount of functionality has outstripped the designers’ ability to present it all in a coherent, understandable way.

Thanks for a great response, David. We have the exact same version of Word. The odd thing is (I just subscribed to it last month) I swear that on the first few documents there was a toggle switch for Track Changes – just like AutoSave and to the right of that in the blue ribbon.

Are you talking about the “quick access” buttons in the title-bar (where the AutoSave control is)?

That bar can be customized. Click on the “…” icon. You can select from 12 popular commands or click “More Commands…” to bring up a customization dialog: 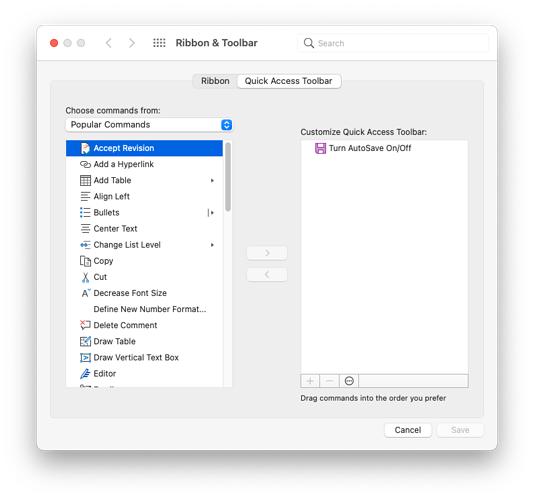 From there, you can select commands on the left-side list and add them to the toolbar in the right-side list. But it appears that there are bugs here. Although you can add any command, some don’t actually go in there when you try to save the changes.

For example, if you look for “Track Changes”, there are three different commands with that name. If I add all three: 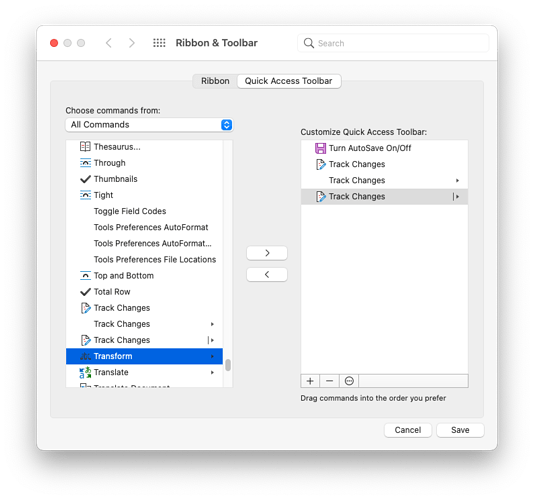 And then click Save, only two buttons appear in the toolbar:

It appears that the second (with the For Everyone/Just Mine menu) is the one you want. In the customization menu, that’s the third “Track Changes” option on the list (with the vertical bar and arrow on the right side of the list item): 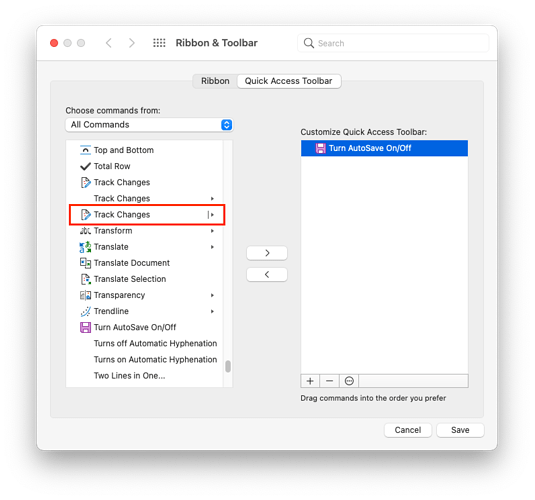 I suspect that you had this item in your quick-access bar at some point in the past and that a recent update may have accidentally gotten rid of it.

Thank you for your insights, Adam. I first learned to use Word when it was a DOS program. I understood it and loved it. I got away from it when I migrated to Apple computers, and when I look at it now, it scares me. That’s why I was happy to see Google Docs evolve into a decent word processor. But I recently joined a team that uses only Word, so I am trying to relearn it.

Thanks for your suggestions, David; I will try them. But what I am missing looked exactly like the on/off toggle switch that AutoSave has.

But what I am missing looked exactly like the on/off toggle switch that AutoSave has.

I think, then, what you want is the icon/button/menu thingy that is captioned “Track Changes.”

It appears exactly the same in all three “width” states mentioned upthread: 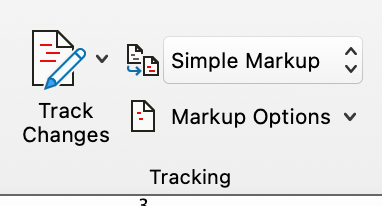 And clicking/tapping the button (not the menu indicator to its right) changes state like a toggle switch would:

When you use it this way, it appears that “For Everyone” is the default mode. If you want to track changes just for yourself, you would click the menu caret instead and select that option.

I’ll pile on about the complexity that they’re trying to condense here. I lost track of it myself last week, and it took 10 precious minutes to find out how it works. I’m another one who has been using Word since it was on DOS, and first saw it in graphical form on a Mac Plus, loading from a 400K disk. I’ve never been without it since, though it’s only recently that most of the hate in the love/hate relationship was finally drained out of it.

Where’s Bruce “Tog” Tognazzini when you need him, eh?

Thank you for your insights, Matt.