A collection of well-known Apple developers, podcasters, and professors have signed on to the Manifesto for Ubiquitous Linking, a call to action among software developers and users alike to encourage capabilities that allow linking between information resources, both local and on the Web.

One of my favourite things is watching lecturer Beck Tench as she literally pieces together her ideas, linking thoughts in Tinderbox connected to DEVONthink notes into a formal set of relationships. Thinking in a set of applications. 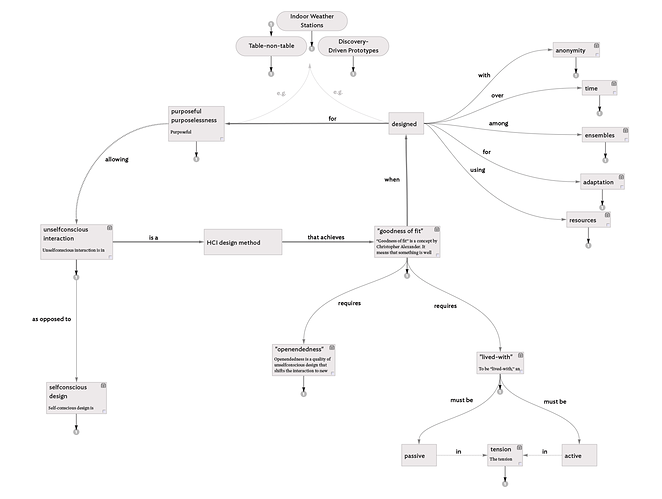 Turning Reading Notes into a Tinderbox Map — I am Beck Tench

A reader emailed me this morning and wrote: I've been in two minds about getting Tinderbox for some time due to the steep perceived learning curve. Your videos helped a lot. What you didn't show was your process for getting information/ideas...

What’s the security downside to this? Can an App gather links? Will there have to be an extended set of authorizations for links, starting with the level of control we now have on Notifications?

Well, I wondered how long it would take the world to catch up. Back in 1993 (also pre-internet) I wrote, and published, and sold exactly such a program: Linksware. MacWarehouse carried it for a year. MacWeek gave it a full page review on August 9, 1993. I’ve attached a PDF of the review.
Seems like the answer is “almost 30 years.” There is no advantage to generating an idea before it’s time.

It’s somewhat ironic that by making info and content more “static,” it allows navigation to be more dynamic, or rather gives the user better access to information, and choice. I’m all in for this reversal of programming trends and products. Obfuscation, intentional and not, is a problem. I fully support the initiative.

Correct me if I’m totally off base but this sounds like a security nightmare to me or as Steve Gibson likes to say ‘What could possibly go wrong?’

Security is always worth keeping in mind, but since we’re not even talking about a spec here, I think it’s premature to worry. The questions that would come up in actual specs or APIs or implementations would seem to be similar to those relating to Web URLs. Perhaps @LucCogZest or @mjtsai have more thoughts along those lines.

Hook seems to be a great tool too, but $70 is still a bit of change for a utility.

What’s the security downside to this? Can an App gather links? Will there have to be an extended set of authorizations for links, starting with the level of control we now have on Notifications?

It depends partly on the OS. For this type of inter-app communication to work in macOS, at the moment, requires that user grant the linking software (“LS”) permission to interact with the “apps to link” (“LA”). In macOS the user is requested to give permission when an app ( software) wants to monitor/control another — user can deny the request on a case by case basis. There’s no way currently to parcel off automation only for linking; so LA’s API (e.g., AppleScript though x-callback-url any other API is allowed, the spec does not even specify the API tech, only generally what it should do) is entirely available.

LS requires getting the name and title of the current resource. This is similar to what time tracking apps (like Timing) might do (to show you a timeline of your activity they log title and file or web paths).

It is important to note that having a link (URL+name)does not guarantee access to linked data. It’s still up to the software that serves the scheme of the URL of the link to police access. That’s not different from the case before this manifesto. Example: suppose you have access to a full URL of a resource on a Discourse website; it’s up to the Discourse SaaS to decide whether you can access that URL.

The manifesto also calls for software to provide automation for creating objects and getting their URLs in return, so that the user can automatically create and link at the same time. A use case for this is linking a PDF in one app (say PDFpenPro) to a new note in another app, such as a file in DEVONthink; or the PDF to a new task in OmniFocus. This is already possible with a great many apps. (This is much more general than macOS 12’s Quick Notes, and substantially predates it).

Returning to the gather links part of @deemery’s post: The manifesto is not a specification for a bookmarking /linking app; so it does not say what happens with the link data. Software like Hook is a linking and bookmarking tool (the stored links). Hook itself does not send user bookmarks to a web server (its syncing is done via iCloud or a user-chosen folder [could be on a USB drive for instance]). However, one could in principle create a general bookmarking tool that sends bookmarks to a service (like Pinboard, Pocket and Instapaper do with web bookmarks); in that case, the user of such software would need to trust the bookmarking service with its bookmarks.

It’s worth noting, as implied above, that linking automation already exists in many apps (e.g., EagleFiler, DEVONthink , OmniFocus , Drafts, and Things).

I’ve independently tried to nudge Apple towards providing better support for automated (and UI-based) linking in its (Apple’s) own apps. For instance, whereas Apple Notes does allow one to get the ID of a note, that ID is not guaranteed to persist across a user’s iCloud instances (e.g., different Macs.) Hook gets around this by forming links out of date-time stamps, which is based on Artëm Chistyakov’s solution.

In terms of technical requirements, the manifesto mentions that software can provide IDs as alternatives to links — IDs can then be the basis for links. And in order to correlate web links with app links, it’s often helpful to expose IDs in links. Some software already does this; manifesto requests more of that.

Once interapp linking becomes much more common, I’m sure there will be many requests beyond what’s in the manifesto. I certainly have a lot I’d like to see. But even if only the manifesto’s humble requests were granted, I think life on a Mac and iOS would be a lot better

It’s delightful to learn about that, Tracy! Were you partly inspired by Sun’s Link Service/Amy Pearl’s 1989 article? I was using Sun workstations at Sussex U and Birmingham (England) U in those days (and a Mac SE/30 at home); but I wasn’t aware of Sun’s Link Service or yours then.

I’m afraid I’m guilty of thinking the whole thing up from scratch. I was not (and still am not) widely read in computer literature. I started programming the Apple in 1978 after buying one and reading “The Red Book”. My programming was entirely self-taught, starting with assembly and moving on from there. It was only several years after Linksware that my “brilliant” idea was hardly the first instance.

Ah… hindsight… :-). The software sold mainly to institutions and governments who could afford it, or so it seems. Equally, MacWarehouse sold it for about 1/2 of my suggested list, and as I recall, I made about $40 per copy.

Ok, that explains the ‘legitimate usage model’ But we also need to consider attack models.

As much as I truly love FileMaker Pro, I still miss HyperCard, which was shipped free with every Mac. And I’ve always suspected it was a launching pad for the WWW, and I loved the way that you could stack and link cards. At the time, linking was a whole new highway system. And relatively speaking, linking cards also made it great software for presentations. I still suspect that HyperCard was snuffed out to facilitate ClarisWork $$$$ sales.

Thank you for the kind words

This whole discussion brought to mind the interesting series of articles by Ted Goranson for ATPM (another blast from the past…) on the history and importance of outliner software.

I am fuzzily (and probably incorrectly) recalling articles written over a decade or two ago, they were memorable nonetheless. His principal ideas were around the notion of folding and how structuring information of multiple kinds within larger documents including links could mimic human thought and expression.

Hypercard did open up the universe!
Just an aside though; If linking were to become more ubiquitous, so to would the issues around links disappearing and going ‘stale’. It would seem that some thought needs to be applied to these issues pretty early in the planning.
My first thought is that when a missing or stale link is encountered an automatic search would be generated. With some awareness of the context and perhaps some metadata from the original link the search could be focused enough to be useful in many situations.

This would be great… I am a happy Fantastical user. It’s ability to integrate iCloud, Google and Outlook calendars is fantastic, as is the ability to hook Zoom, Teams and Google Meet to Calendar events.

I often link Reminders and events to email messages, it would be great to be able to access this functionality in Fantastical.

Apple recently added the ability to add FaceTime calls to calendar events, but only within their own app. I’d also love to see this functionality in Fantastical.

That sound you hear is OpenDoc turning over in its grave.