I’d like to add a person’s WeChat identifier to the information that I have for them on their Contact card. I’m thinking that the best way of doing it is to format it as a URL and add it as a link.

Since I have the WeChat app/application installed on all my devices, I tried using this URL scheme:

Where {toID} is their WeChat ID.

Unfortunately, apparently this URL scheme was discontinued and now such a URL only opens the application’s chat screen, as if it is ignoring the WeChat ID in the URL parameters.

Does anyone have a better idea for adding a WeChat ID to a Contact?

Does anyone have a better idea for adding a WeChat ID to a Contact?

A low tech solution, which I had used in days of Skype, would be to enter the WeChat ID as a phone number. Pick a label otherwise unused.

enter the WeChat ID as a phone number. Pick a label otherwise unused.

I don’t think that putting a WeChat ID in a phone number field is a good idea because if it’s tapped on an iPhone then the phone number corresponding to the letters making up the WeChat ID will be dialed (I think). Also, the label can be set to any customized value so there’s no need to use one of the existing ones.

Google Contacts provides for unlimited (?) “Custom Notes” which can have a label as well as a value. I was hoping to use something similar in Apple’s Contacts but I don’t see anything similar.

I suppose that I can shove the WeChat ID (surrounded by unique strings) into Notes but I was really hoping for something simpler than parsing Notes field.

Maybe I should use the Instant Message field with the custom label “WeChat” and choose an arbitrary service that none of my contacts use. Perhaps it would map and sync well with Google Contacts.

Apparently, the best way to pass an arbitrary name/value pair string between Apple and Google contacts is through a URL field, albeit, the value is URL encoded. An arbitrary label can be assigned to such field to prevent namespace collisions and give AppleScripts a way to identify the pair and read and write to it. 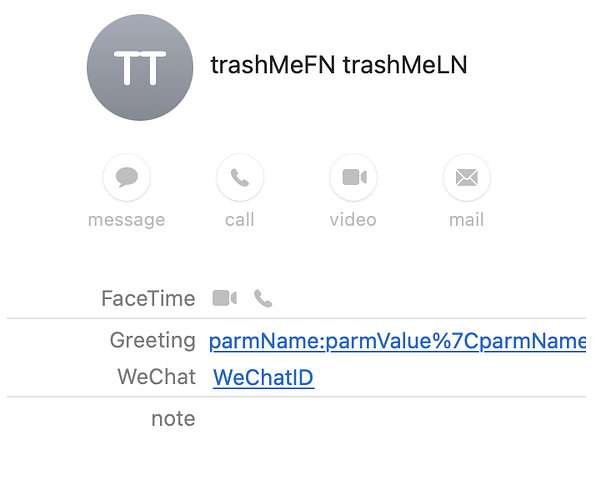 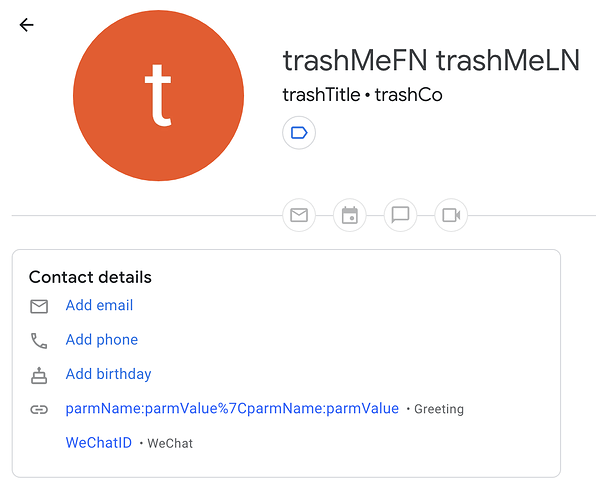 I’ll use the first “URL” with the label “Greeting”, to pass a parameter string to my Occasion Greeter AppleScript; the string supports multiple parameter name/value pairs delimited by a pipe character (“|”), which has the URL encoded value of %7C.

The second “URL” has the label WeChat and contains the text string of the contact’s WeChat ID. (The only problem is that I can’t seem to select the ID without putting the Contact into Edit Mode.

Interestingly, clicking on either “URL” in Apple Contacts does NOT launch my browser, but it does on Google Contacts.

Does anyone have any other suggestions for putting name/value pairs into an Apple Contact in such a way that it syncs with Google Contacts?

A low tech solution, which I had used in days of Skype, would be to enter the WeChat ID as a phone number. Pick a label otherwise unused.

My post in Apple Discussions yielded the same recommendation of using a Phone field with a custom label of “WeChat.”