A couple of weeks ago (within a week of installing the latest watchOS) my Apple Watch began going into power reserve mode unexpectedly. I noticed that the battery indicator could be stuck at 100% for a long time. After talking with Apple Support on the phone and getting a remote diagnostic done (not showing a problem), I un-paired and re-paired the watch with my phone, restoring from backup. That didn’t solve the problem. After a visit to the Apple Store and another diagnostic test, I again un-paired and re-paired the watch with my phone, this time setting it up as a new watch. That also didn’t solve the problem.

I decided to monitor the watch and record the behavior of the battery indicator as the battery discharged in normal use. I made sure it was fully charged by leaving it on the charger for 2 ½ hours. I looked in the App Store to see if there was an app that would help me and discovered Battery Grapher. It reads the battery indicator once an hour and records the results in a bar graph. Just what I needed. The result showed that the battery indicator was stuck at 100% for 16 hours! Then it started to fall for 8 hours, reaching about 53%, at which point it plummeted into power reserve mode in less than an hour.

I printed screen shots of the graph and went back to the Apple Store. They agreed to send the watch to the service center. The service center reported they could not reproduce the problem and returned the watch, but when I got it back it was fixed!

A tech person at the Apple Store told me that the first thing the service center did upon receiving the watch was to update the firmware and operating system software. Although the watch had the most recently released version of watchOS (at the time), reinstalling it was not something I could do, and I certainly couldn’t rewrite the firmware (nor could the Apple Store).

I have just found the Battery Grapher app via this Macrumours article (by the developer): 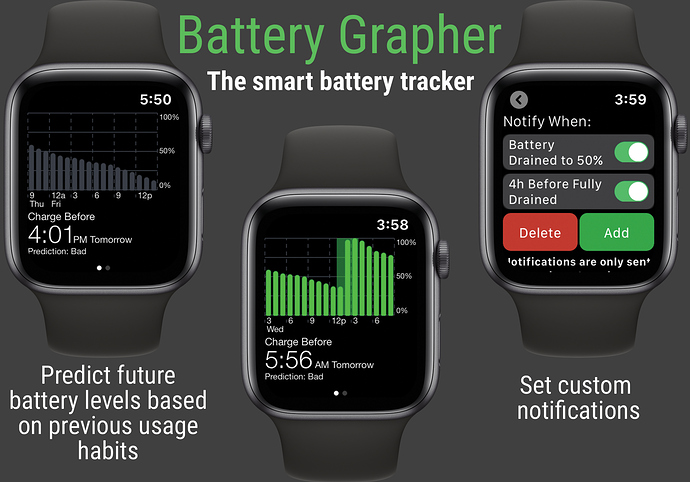 Like many of you, I am always trying to extend my watch’s battery life and was frustrated that a battery graph wasn’t included in watchOS. The app ended up growing into much more than just a battery grapher however. Battery Grapher graphs your Apple...


It is a neat little app!

BTW - I am intrigued by your Watch firmware discovery.

Which model watch was this?

Thanks. I have a Series 4, so probably unaffected. I certainly haven’t seen any such problems.