Was "Organize" Moved from the Numbers Sidebar?

Am I mistaken or was the “Organize” item removed from the Sidebar in Numbers?

I was certain that the tabs in the Sidebar had been: Table Cell Text ¿Arrange? Organize (I’m not sure about Arrange as I never used it). Now, “Organize” is missing. I know that it’s available through the menus (View —> Inspector —> Organize), but that requires more mousing and means I have to constantly switch between “Format” and “Organize”.

Is there any way to move “Organize” back to the sidebar along with “Table”, etc.?

Maybe I’m confused. I have Numbers version 10.1 (6913). The Organize option is in the upper right corner of my window. It’s not in the sidebar, but mousing through menu options isn’t required either. 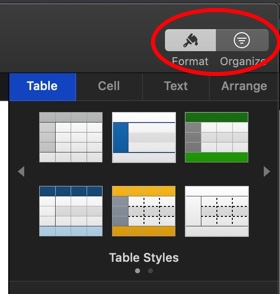 No, you aren’t confused. I just wasn’t remembering exactly where elements had been in the window — I just knew that “Organize” had been there and then it wasn’t.

And, now I feel a bit foolish, especially since I’ve used Apple products for 35 years and I made a newbie mistake (not dissing newbies, it’s just that I generally considered myself pretty experienced). Apparently, at some point I unintentionally invoked the keystroke combination to “Hide Toolbar” (cmd-opt-T). I looked through menus trying to figure out if I had done something to hide “Organize”, but overlooked View—>Show Toolbar.

Anyway, mystery solved — Jack Clay saved the day by getting me to look more carefully for what I might have done wrong. Thanks, Jack.