Apple finally got me to try Apple Music, only because I needed 4TB of iCloud space, but that’s a separate story.

So I’ve been unclear and nervous about how decades of songs would be treated (or abused) by their upload/match process. I have created Smart Albums to track at least 11 different iCloud Statuses for my tracks. 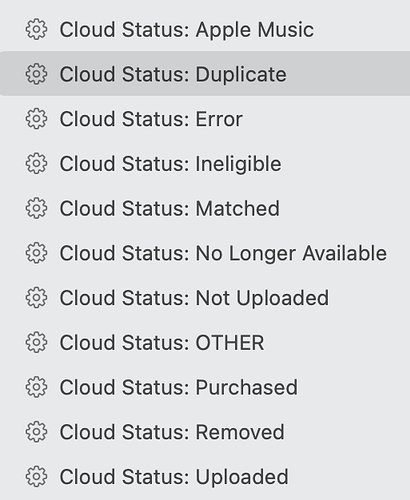 But let me focus on ones marked “Duplicates” since I’d like to resolve those and there are 103 of them.

When I select one and click the little iCloud icon, it provides more detail: 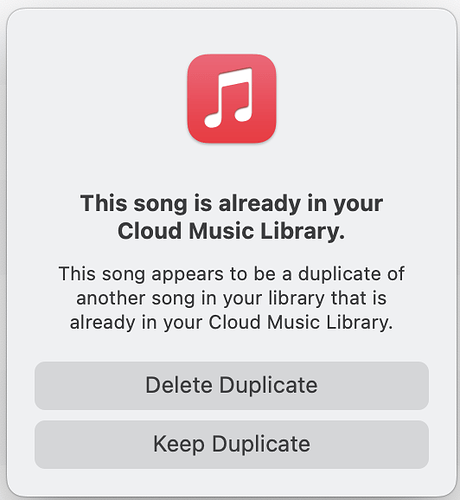 Nervous that it would do the wrong thing, I aborted and did some homework. And of course, I was skeptical about how it chose which of the 2(?) tracks as the one to be on the chopping block. I checked “Info” on the one standing on the gallows, and the File pointed to a local mp3 track. Then I went searching my library for the “other one”, which had nothing under File other than iCloud Status = “Waiting”.

Pretty sure Apple would make the wrong choice, I made a copy of my mp3, and then went back and chose the “Delete Duplicate” option, at which point, sure enough, it deleted the mp3 and left me with this non-playable track that (still) says Waiting.

So what’s going on here? Are these tracks that should be “Uploaded”, but never finished, and got stuck in an in-between state?

And what’s the right solution here? Is there a “try again” feature, or should I go hunting for all the stuff stuck “Waiting”, deleting, and then hope Music tries again so the track gets into the Cloud?

So in my typical fashion of working hardest on solving problems right after I ask for help, I have some follow up:

After I let it delete the “duplicate” (a real mp3), I dragged my backup copy back into Music. It did NOT create a duplicate, but simply became a PLAYABLE version of the “Waiting” copy.

I then found File > Library > Update Cloud Library and clicked it and let it finish. iCloud Status now says Uploaded and File shows it’s an mp3.

So I guess the conclusion (to this piece of my problems) is that it’s a bug and I need to copy/remove duplicate/reimport to get Apple fix recover?

Update: seems random whether it made the right or wrong choice about deleting duplicates. Here’s another where the “duplicate” is the real file:

Frankly, I think tagging it as a duplicate is a bug. This “Waiting” status should not be confused as a duplicate. It appears to be a record-keeping entry only. And in fact, I have not found any way to “search” on ones stuck in Waiting. My “Other” smart album above was my attempt to use negative logic to find these, but it doesn’t work.

I have been recently trying to clean up my Music database and delete old songs or archive them. Sometimes when I go to Show file in Finder, I notice several versions of the song, some with numbers appended to them. Playing with these has messed up my database at times (Thank you Doug Adams for your AppleScripts and Apps), but there needs to be an easier way to open up more disk space and clean this up.

Unfortunately, when it comes to synching and matching to Apple Music, how that works out seems to depend on which way the wind is blowing at Cupertino. Combined with the Music app’s occasional confusion when it comes to organising your library, it means that there’s a real risk to any local music files. I ended up cancelling my subscription and rebuilding my music library after losing a lot of tracks.