USBefuddled: Untangling the Rat’s Nest of USB-C Standards and Cables

USB-C was supposed to make connectivity easier. Instead, it has acquired a profusion of footnotes, exceptions, and labeling that can leave average users frustrated—and with the wrong cable. USB 4 and Thunderbolt 4 are our last best hope.

This is a great article.
I took my new iPad Air 4 on a brief trip last summer, and the USB C cable I brought with me would not charge the damn thing. Even buying one at a local drug store that said “Charge your devices” would not work.
I use the iPad until the power ran out…
When I got home I tried 4 other USB C cables and they ALL would charge the iPad Air 4.

I took my new iPad Air 4 on a brief trip last summer, and the USB C cable I brought with me would not charge the damn thing. Even buying one at a local drug store that said “Charge your devices” would not work.

If you still have it, I would love pictures of its cable heads and any printing on the cable wire itself. I didn’t even get into that latter subject, because some of the best cables seem to have no printing on them at all. When they do, it’s very wire technical (gauge, temperature, numeric codes indicating conformity) rather than protocol.

It was, like 6 months ago. I will have to look through my bags see if I can find that one, or two.

I agree…but would suggest updating it with a single table including the various standards, theoretical speed, approximate real world speed when one uses an SSD or spinning drive of the appropriate standard on a relatively current Mac, and power available…most of that is already in the reticle but a concise table like the connector compatibility one would be more useful.

Great article! I would quibble slightly that the USB 3.0 Micro-B (wide & flat) connector is obscure. It was very popular on external USB 3.0 drives. I have both 2.5-inch and 3.5-inch drives in active use with that connector. I do find that connector to be the most finicky of all the USB connectors, so I’m happy that USB-C is supplanting it, but it is still in daily use.

was very popular! @jcenters had a similar objection, but I think in the universe of TidBITS readers, it’s less likely most people have encountered it. I’ve only ever owned two drives with it across all of USB 3.x history; all mine have either been 3.1 Gen 1 Type-A or 3.1 Gen 2 or later USB-C!

updating it with a single table including the various standards

We leaned heavily on the incredible array of information assembled at Wikipedia in chart forms, which is the result of many hours across many people producing something that’s quite accurate and constantly updated (and updatable). Not practical for us!

Because I am a Mac admin, I have 11 external drives in my office that are in use to some degree. Eight have USB 3.0 Micro-B, one has USB 3.0 B (square-ish version of same connector) and two have USB-C (one of which I just purchased this week).

Thinking a bit more deeply on this, the reason I may have seen it more often than you suggest is because I am working exclusively with desktop Macs, not laptops. Desktop users weren’t really forced off of USB-A connectors until the M1 series Macs, so flat Micro-B to A would be more common for them (e.g., Time Machine backup). If all you have been using is a MacBook, you’ve been seeking out USB-C drives for some time out of a desire for simplicity.

Thanks Glenn. Much appreciated. I, like many of you i suspect, have a box’o’cables on my shelves. I have a go-bag of one of every kind of USB i take to class to deal with whatever the students turn up with. I look forward to the day they all get thrown out… 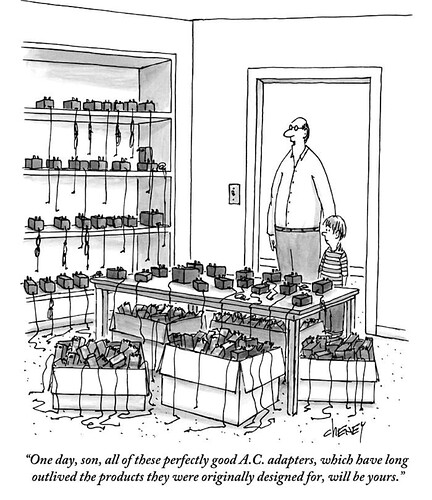 So, maybe I missed it, but there’s one question that seems obvious to me that is not answered by this indeed thorough lesson: If I get the “top end” cable – presumably the Thunderbolt 4/40Gbps/240w – will it work for all of the “lesser” applications? Or do I really need to carry 20 cables in my bag, one for each specific device/use?

Fantastic question. Yes: a USB 4/Thunderbolt 4 cable that’s either active and up to 2 meters or passive and up to 0.5 meters rated at 240 watts will almost certainly do everything because of the backwards compatibility built into it. Apparently, this cable (wattage aside) would also solve the 12-inch MacBook problem, the only Mac with only USB 3.x standards built in—that Mac can only use a USB 3 cable between it and a Thunderbolt 3 port, as a Thunderbolt 3 cable can’t be recognized properly by the controller on the MacBook. Thunderbolt 4’s enhanced backward compatibility apparently allows a USB4/TB4 cable to work in that very edge situation.

Good article. I might argue that such complexity is unavoidable in an evolving standard that’s 25 years old but I agree some of the labeling and branding choices are a bit suspect. Good to see a deeper dive on the different standards and what they mean. Subscribed.

I tend to agree with Anthony as I’ve several devices that use the 3.0 Micro-B, the most demanding being a Salea Scope/Logic Analyzer (which ironically decodes USB). It has definitely taught me that not all cables are made equally, (and anti-virus programs). That said, finding the right cable is nothing to finding the right “docking station”/port breakout unit. I’ve 3 USB C ports on my tablet Period. One of the ports to date needs to be dedicated to power/charging, as I’ve only ever got it to charge maybe twice thru a port breakout. Add to the mix “Display ports”, Ethernet, SD cards, ect, ect, a bump to the cable can result in waiting a good 30seconds to 5 minutes for everything to reset itself depending on what was running.

In reality it should actually make cables cheaper, as most devices don’t run at the outer limits of the specs. (Lesson learned by having one that does, and trying to find chargers that will charge it if the OEM one is forgotten, verified one day with a laboratory power supply). By increasing the voltage allowed, you can carry more power over smaller wires. My understanding is that the biggest downside is the risk of lower quality DC supplies (chargers), allowing ripple, which then can introduce noise onto the data lines.

Eight have USB 3.0 Micro-B, one has USB 3.0 B (square-ish version of same connector) and two have USB-C (one of which I just purchased this week).

FYI we have shaded the article’s sentence to reflect this after more feedback. It seems HDD makers prefer 3.0 Micro-B because it’s fast enough at 5 Gbps (3.0 or 3.1 Gen 1) to suffice for the maximum data transfer rates of a 5400 or 7200 rpm HDD. I have bought HDDs with USB-C, however, and all the SSDs I’ve purchase use USB 3.1 or 3.2 over USB-C or Thunderbolt 3 over USB-C.

It feels like they should be moving into a state of less confusion by consolidation, but instead of made it more confusing by adopting multiple labeling standards over time. However, the USB 4/Thunderbolt 4 consolidation should be the ultimate prize, and drive cable prices lower as those become the only ones people want to buy (as another commenter noted).

Since the article published, we’ve done a little tweaking based on feedback. Originally, I said USB-C cables could support less than 60 watts, but only USB host and peripheral ports can do so! The USB-C cable spec notes very obscurely that a cable has to be able to “tolerate, or be protected from, a VBUS voltage of 21 V,” which translated means, “all USB-C cables must pass 3A at 20V.” The 21V is a margin of error.

You can find some cable/adapter pairs labeled 15W, but it is possible the cable is rated at 60W, while only the adapter is rated at 15W. Some cables also claim 15W by themselves, but those appear to be out of date or mislabeled—or just out of compliance.

On the Thunderbolt 3 side, I did note earlier that you could have 15W Thunderbolt cables, but that’s a misreading on my part: a Thunderbolt 3 cable that handles 100W of power may only allow 15W of bus power for a connected drive! So the 15W isn’t the cable’s capability, but it’s charging capability off a host adapter.

And to make things more confusing, there is still the legacy standard for devices/chargers that don’t implement the USB PD spec:

It’s all quite messy, IMO.

It’s all quite messy, IMO.

As good as that is, I challenge anyone to find the clear statements:

The first is found in Wikipedia, but requires assembling data from USB technical specifications to reach that conclusion (everyone just quotes Wikipedia, which in fact does not link to the appropriate spec, just a press release that doesn’t include that information); the second is more readily available, but not quite clear, because all USB 4 hubs must support Thunderbolt 3, while cables and controllers don’t have to, which is a weird requirement that will ensure more problems.