Too Clumsy For A Trackpad?

Don’t take this too seriously.

We got a cat last August. He spends most of his time indoors. One thing he really hates is to see small objects sitting on a shelf, desk or counter. He remedies this by pushing them to the floor.

He felt that way about my Magic Mouse. It hit the floor often enough that it stopped working. I decided another mouse would be foolish, so I bought a Magic Trackpad thinking it might not elicit the “it belongs on the floor” response from the cat and also might be too difficult for him to push. I was right on both counts.

What I was wrong about was my ability to use a trackpad. I tried, believe me, I tried. I just can’t do it. I find windows wildly racing around the screen. Windows expand and contract without my consciously initiating such an action. I could never master dragging and dropping with the trackpad. I gave it six months and finally gave up.

Note that I have been clumsy my entire life. In fact, my wife calls me Mr Clumsy. I spill, drop and knock things over so often that any other moniker would be inappropriate.

I bought a new mouse from Logitech. An M590. There are many reasons to dislike this mouse. You need Logitech’s software to take advantage of all the buttons and my iMac doesn’t detect it as a bluetooth mouse (“No mouse found”). It works fine once you set it up. And, I am so happy to feel that I’m finally back in control of my iMac.

Incidentally, my wife (not at all clumsy) has her eye on the trackpad. I have a feeling it will not go unused.

FWIW, I still use a wired USB mouse (connected via a USB hub, so I don’t burn one of the computer’s USB ports for just a mouse).

Yes, it can get knocked off the table, but when it does, it won’t hit the ground. It will dangle from its cord.

Of course, a mouse danging from a cord may become even more of a cat toy than your wireless mouse. But if you find cheap mice comfortable (I’ve been using Microsoft’s least-expensive Basic Optical Mouse for years), you may want to just consider it a sacrificial part and replace it when the cat destroys it.

you may want to just consider it a sacrificial part and replace it when the cat destroys it.

The Apple Magic Keyboard that came with my iMac failed a few years out of warranty. I didn’t much like it, anyway. (Not clumsy friendly.)

So, I replaced it with a Logitech K120 wired USB keyboard which cost me about US$7.00 here in Thailand. I love it. For someone who grew up with manual typewriters and early IBM computer keyboards, it just feels right. Plenty of key travel, nice keyboard sounds and it’s robust as heck standing up to the occasional coffee splashes and food crumb drops. (Haven’t tried a full cup of coffee yet.)

And, if the cat manages to destroy it, it’s only seven bucks down the drain.

A few tips for taming the Magic Trackpad from someone who has used them ever since the first version came out:

One thing that had been happening to me recently was that the system couldn’t sense a two-fingered tap from a one-fingered tap(so it became hard to simulate control-clicking items). I realized that the problem was that I had my fingers locked next to each other so that the system saw them as a single finger. By spreading them a bit, I was able to two-finger tap consistently again.

I think the main problem I had was that either my thumb or one of my other fingers would inadvertently touch the touchpad while I was trying to do something else which caused unpredictable and often bizarre results.

And, I just don’t seem to have the coordination to get some things to work, like Mission Control and Show Desktop. Both of those are easy to do with the Logitech mouse

I think the trackpad is just not appropriate for my level of manual dexterity.

The key is to keep your wrist high and use your fingers only to attack the trackpad (and your keyboard).
I learned this when I took piano lessons and then later typed on a real typewriter. As a side benefit, this also aids in preventing wrist problems. As I’ve grown older, rather than letting my arms take all the support in space, I’ve set up my keyboard and trackpad on a keyboard tray so that they lie about 5cm below the armrest on my chair. For the trackpad, this permits me to support my arm and hand with the arm of the chair, so that the fingers’ only function is to tap the trackpad in appropriate ways to carry out the desired function.

If you do this there is no way that stray portions of your body should touch the trackpad.

Perhaps part of the problem is that my chair does not have arm rests, so I always rest the palm of my hand on the rollout keyboard tray on my desk. This means that my palm, thumb and small finger are all perilously close to the trackpad.

I guess I could buy a chair with arm rests, but I suspect the mouse was cheaper.

One thing he really hates is to see small objects sitting on a shelf, desk or counter. He remedies this by pushing them to the floor.

And you have to wonder why, don’t you?

I adore the trackpad, having used mice and trackballs (my prior fave) for decades, I’m much happier with how Apple have designed these marvellous huge trackpads. Found it worth spending time configuring the controls in Sys Prefs though and @aforkosh is correct above, raise the arm.

I got a Magic Trackpad with my current iMac when I bought it in 2010. The pattern I established early on was that I’d try doing my work with the trackpad, then I’d run into something (often selection in a graphics program) that started to frustrate me, and I’d grab the mouse, and much later I’d notice I was still using the mouse and the trackpad batteries had died in the interim.

An obvious solution is to get rid of the cat and get a dog.

Ah ha! Finally a response in the spirit of the OP.

@aforkosh is correct above, raise the arm.

I happened to have a Magic Trackpad that wasn’t being used, so I hooked it up to give it a go. Not quite 24 hours yet, but so far good and bad. I love the additional gestures available, and tracking, clicking, swiping, tapping all seem natural and act as expected. I was previously using a Magic Mouse, so perhaps I did have some transferrable skills. But strain relief on the wrist and lower arm may be the issue that sends me back to the mouse.

I don’t have a keyboard tray, so I can’t get the MT low enough (or my arm high enough) to just dangle my fingers off the edge of the arm rest. Instead, as with the MM, I support most of my arm with the arm rest, and rest my wrist on the desk. But I either have to rest my fingers on the MT, which risks an unintended tap or swipe, or hold them up, which adds muscle strain. The advantage with the MM is that my hand is big enough to fully cradle it. So both the left and right sides of my hand, as well as the wrist, can relax on the desktop.

(And as a side note, one of the many things I love about this forum are the “hmmm, I’ve never done it that way before, maybe I should try it?” ideas, such as the current discussion about trackpads.)

But strain relief on the wrist and lower arm may be the issue that sends me back to the mouse.

This is funny to me. I’ve been using trackpads almost exclusively since the mid-1990s and a few years ago when I tried to use a mouse I developed crippling pain in my fingers within an hour.

I think it was mostly me gripping the mouse too tightly – a phenomena similar to a typist pounding the keys too hard – so I probably could unlearn the behavior, but it was easier to just plug in my Magic Trackpad and use that.

Trackpads work just fine for me, though I’m generally 99% using laptops so the ergonomics are a little different from a desktop scenario.

Since I’ve mentioned my setup. I thought you’d enjoy a picture: 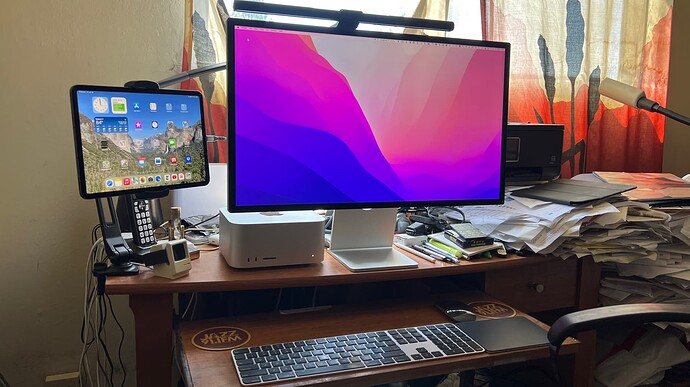 The computer table dates from 2001 and originally held a monitor with my tower Mac on the floor between the left legs. When I switched to an iMac, it sat where the monitor now sits. The fixed-height armrest on the desk chair is 2" above the keyboard tray, and there is about a 3.5" drop from the tabletop to the tray.

The height of the previous desk (still used for writing, storage, and an occasionally used second monitor) is the same as the height of the keyboard tray. Note that the setup on my current table places the old iMac (and current studio monitor) at an ideal height. On the old desk, the monitor would need to be raised.

Thanks, Alan. That’s very useful, and I see what you mean about the relative heights of the tray, armrest, and desktop. I’m going to go for a setup like that (whether I stick with the trackpad or not) when I remodel my office (one of these days…).

It’s a bit amazing to me that what was intended to be just a funny tale turned out to have inspired so many interesting and useful comments about trackpads and mice.