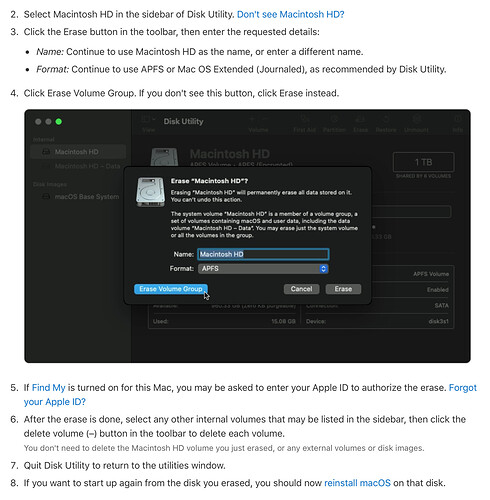 Surprisingly, an earlier iteration (March 31, 2020) of the same support article (accessed using the wonderful Wayback Machine) contradicts the above instructions and specifically instructs you to delete the “Macintosh HD - Data” volume followed by the “Macintosh HD” volume and not to click the Delete Volume Group. See this screenshot: 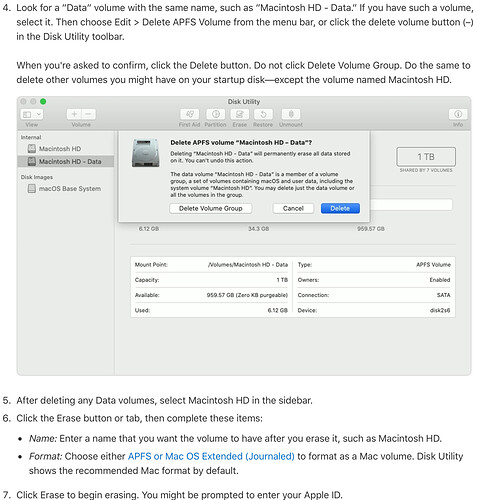 Yet another version (August 31, 2020), disregards dealing with volumes and recommends deleting the top-level disk itself. 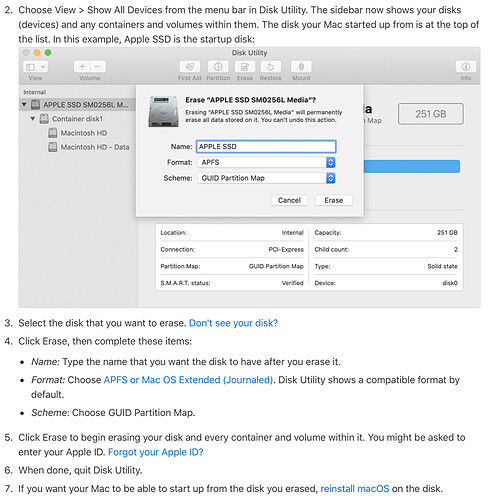 I hope I have not framed this in a manner that makes the issue even more confusing! I’d love to hear what people here think is the best way to erase a disk on both Catalina and Big Sur. Thanks!

If you want to delete the entire disk, you would need to boot from something else (e.g. a bootable system installer flash drive) first. But that is going to be pretty risky on an M1 Mac, since there are several pre-boot and recovery volumes whose deletion could end up bricking the computer (at least until manually reinstalled with Configurator 2). Hopefully, the M1 macOS Disk Utility has something to prevent you from deleting (at least without really really meaning it) these internal APFS containers.

I’m not sure why the March version of the instructions doesn’t want you to remove the volume group. Note that it is not talking about the APFS container - deleting that would blow away the Recovery volume you’re booted from. The volume group is an artificial construct to tie the system volume to its data volume. If you’re deleting both of those volumes, then I don’t see why deleting the group would matter one way or the other.

The only explanation I can think of is that maybe the macOS installer at the time had a bug where it failed to re-create the volume group correctly or where it expects you to pre-create the group first. Or maybe Apple was concerned that some systems might have additional volumes in the group and they didn’t want you to accidentally delete them as well.

The current instructions make the most sense to me. Deleting the volume group means it will blow away the macOS system volume any any other volumes closely tied to it, but it won’t touch any of the other volumes that may exist on the device: