T-Mobile is offering free “test drives” of its 5G cellular-data service by leveraging the eSIM built into recent-model iPhones. After a quick app install, you get 30 days or 30 GB of data (whichever comes first) to try out T-Mobile. The beauty of the eSIM approach is that it doesn’t mess with your existing service.

I am very interested in this idea and may have to check it out. Thanks for the article!

I’ve been waiting for this since e-Sims were announced. It figures it would be T-Mobile that would be the industry first for this. I echo thanks for this article and will follow up.

My Carrier, Ting, uses T-Mobile, so I’ve had a chance to sample their 5G service here in Boston. A word of warning: don’t use an app like Speedtest to confirm your speed without considering how quickly you may hit the 30GB ceiling. My ceiling is 1GB (I don’t use much cellular data). I blew through it to 2GB with a single Speedtest run . . .

This is a good point, but 30 GB isn’t a lot to begin with and is intended to be a limited look at the service (much like testing a flavor at your ice-cream parlor). In that context, speed tests make sense and are appropriate since people will want to see what kind of performance they can get.

I’ve been a loyal and very satisfied T-Mobile customer in Los Angeles for about two decades. Recently my home WiFi crashed, and while I was trying to get it online again, the Hotspot service was my only way to connect. (THANK YOU for letting us know about the Speedtest problem; that may explain a lot!)

The problem is that T-Mobile severely restricts the amount of high-speed Hotspot data available to you. The limit varies by plan. Our premium plan was capped at 10GB per monthly billing cycle. Once we hit the limit, we could still connect, but at 3G speeds (about 0.5 MB/sec), which is essentially useless. You could pay more and jump to 20GB. For an extra $55/month the absolute high-speed limit is 40GB. Unaware of its data use, I kept running SpeedTest because T-Mobile kept mistakenly downgrading us to the lower fallback speed. I spent hours speaking with T-Mobile reps and finally got it fixed. Meanwhile I kept blowing through the high-speed caps, and nobody understood why. Problem solved once I got our home WiFi running again.

I’ve set my phone to use LTE only from now on just to be on the safe side.

In my use case (and perhaps in many others’?) it makes no difference to performance, although it definitely could for a hot spot.

I’ve been doing this ever since I got my iPhone 12 mini (and had been eagerly awaiting its release, as I’ve wanted to have a second number on my phone for a while). I don’t use it for business as such, but it’s great to have a ‘non-personal’ number to give out when businesses ask you to provide a phone number and for track-and-trace. That way I can keep my personal mobile number to friends and family and reduce the chance it gets on some spam list.

In my case, I went with eSIM.net’s Global pay-as-you-go service. As long as I top-up $10 every 3 months, I keep the number. So for ~£30/year I get a second number and more than enough credit for the limited amount of calls and texts I make on the number.

It works well, and with one exception I think Apple did a really good job of integrating two phone numbers into iOS, making it easy to use the one you want without overcomplicating things. The exception is Messages. While you can choose which number to use when you start a new text or iMessage conversation (as @julio shows in the article), once you have an ongoing conversation with someone, there’s no way to switch it to the other number. It’s not been a specific problem for me yet, but I would like to have more control over it. To be honest, this issue has existed since the beginning of iMessage – you also can’t tell iMessage to start sending from your email address if you’ve started the conversation ‘from’ your phone number (and vice-versa).

How does one delete the service? I signed up for T-mobile and don’t need it. Just tried it out. But it may be interfering with. my regular log-ins to T-mobile. So. How does one remove the service not only from the iPhone but from T-mobile’s accounting of it? Thanks.

I‘ve been in Germany for the past month and needed to get some mobile data for our two phones as I’m a cheap bugger and use T-mobiles pre-paid &15 /m 2Gb plan that includes zero international data. I opted to go the ESim route and managed to get 10Gb for $26 for a month. I was so impressed with the whole ESIM I set up a little website where you can see what the carriers give you data wise when you travel - hint , if you’re not a Google FI subscriber you are basically hosed - get an ESIM!

Website is www.eSIMplanet.com. Currently I link to only one vendor Airalo but plan to add some more when I find legit companies. The switching between the two lines is tricky AND for the love of dog don’t forget to switch off all the data hogging apps and yes don’t do a speed test

I actually used it with my laptop too but make sure to use the excellent tyipmode OSX app www.tripmode.ch that limits data usage on a per app basis.
I am actually on the Bus now to the Berlin airport typing this - signal has been great on our limited travels around Germany. carrier is O2.

Also remember you can have multiple ESims but you can only use two at a time. I added the tmobile one mentioned here and it activated ok but speeds are edge.

While you can choose which number to use when you start a new text or iMessage conversation (as @julio shows in the article), once you have an ongoing conversation with someone, there’s no way to switch it to the other number. It’s not been a specific problem for me yet, but I would like to have more control over it. To be honest, this issue has existed since the beginning of iMessage – you also can’t tell iMessage to start sending from your email address if you’ve started the conversation ‘from’ your phone number (and vice-versa).

I’m a little confused about how this works.

With one SIM, I’m familiar with being able to choose either your phone number or iCloud email address for starting new iMessages. But if you have two SIMs, can you choose which number to use per-message, or do you have to choose one for all?

I’d want to be able to start them from both numbers, which I do now using Google Voice, but the Google Voice app is…not very good.

Using Dual SIM with an eSIM

iPhone XS, iPhone XS Max, iPhone XR and later feature Dual SIM with a nano-SIM and an eSIM.1 An eSIM is a digital SIM that allows you to activate a cellular plan from your carrier without having to use a physical nano-SIM.

According to this article, when you have dual-SIM operation, your phone will receive calls/texts on both numbers. You declare one as your default, which is used for outbound calls/texts.

You can override this default on a per-contact basis (as a field in the Contacts form) or on a per-call bases (as a button on the dialing keypad screen or when initiating a new conversation in Messages).

You can override this default on a per-contact basis (as a field in the Contacts form) or on a per-call bases (as a button on the dialing keypad screen or when initiating a new conversation in Messages).

Interesting. Thanks! That’s actually probably good enough for my needs.

But if you have two SIMs, can you choose which number to use per-message, or do you have to choose one for all?

@Shamino answered this already, but to give you a visual… When starting a new Messages conversation, you can tap on the account bubble to choose which to use and it looks like this: 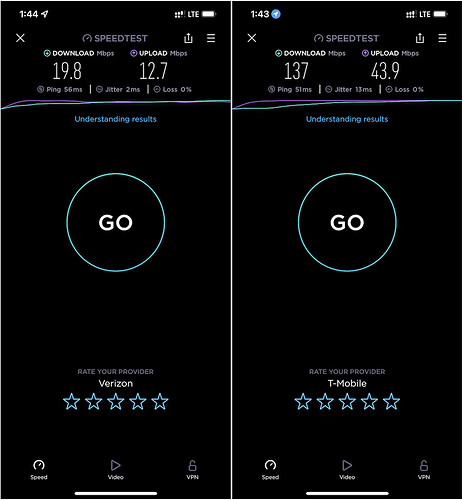 Well, that’s a fairly stark comparison. I think I may need to do some more looking into T-Mobile.

I know the T-Mobile one says LTE but it was on 5G while it was running the test, and then dropped back to LTE for a moment afterwards.

I wonder if there is a way to test T-Mobile’s LTE speeds in this area vs Verizon’s.

Will have to do some “real world” tests on how it does, but this is an encouraging sign.

I wonder if there is a way to test T-Mobile’s LTE speeds in this area vs Verizon’s.

This does not work for international data, I signed up for this when I was in Germany but didn’t get it to work until I got back to the US.

It works great and I just keep on signing up with different email addresses seems to work fine even though I’m a T-Mobile user with a measly 2 GB of data - pre paid, it’s fun to have more data but I’m not willing to pay more than my $15 a month!

One more thing in my town which is somewhat of a high tech hub there a many 5G towers that support T-Mobile but for a few for Verizon.