Sync Contacts to BOTH iCloud and Google

I currently sync the 6K Contacts I have on my iPhone 12 Pro (iOS 15.2) to Google Contacts and it is very reliable. My iMac (macOS 12.1 Monterey) is synced with nothing.

Is there going to be a problem if I also sync my iPhone to iCloud too? Are Contact additions/deletions/changes on my iPhone going to reverberate between these clouds and possibly cause duplications/deadly embrace/corruption problems somewhere? Seems like I’m inviting a disaster.

If syncing my iPhone is going to be okay syncing to both clouds, do I risk any problems also syncing my iMac as well to iCloud (but not Google)?

Thank you for reading.

You won’t be syncing a single (iPhone) contacts list to two sources. Instead, your phone will have two contacts lists - one Google and one iCloud. Data is not automatically moved between the two lists.

In iOS, go to Settings → Contacts → Accounts. Create one for iCloud and one for Google (if they don’t both already exist). Make sure each is configured for Contacts.

When viewing contacts in iOS (e.g. in the Phone app), each will appear as a separate Contacts group (tap Groups in the upper-left corner of the Contacts screen to select which you want to see. I recommend keeping both selected unless you need to only view one.)

Contacts that exist on both lists will be combined when viewing your list of contacts (if you’re configured to show them both), and the details will be a merge of the data on the two lists. When viewing the contact, there will be a “Linked Contacts” section at the bottom of the screen, where you can view and edit data from a single source.

When you create a new contact from iOS, it will be added to the account you select as the default account (on the Settings → Contacts screen).

Thank you for your very complete review of contact syncing on iOS.

I didn’t realize that contacts are kept distinct by sync source. So, my concerns were not warranted. And I don’t see a benefit to syncing to two separate sets on contacts.

I wasn’t very clear in my original post, but I wasn’t really interested in making changes—syncing or otherwise—to my iPhone. All my iPhone apps seem to work just fine with syncing to Google Contacts.

On the other hand, the contacts on my ancient iMac (macOS 12.1 Monterey) are very incomplete and don’t sync with anything. I think that Photos is the only MacOS application I use that might be associated with information in MacOS Contacts. (When I try to mark photos with faces it’s getting information from somewhere.)

Do you have any warnings about doing so? Do you think I might have to redo all my all the faces in Photos?

Thank you again for your explanation of contact syncing on iOS.

I have contacts synced to multiple Google accounts as well as my iCloud. In general, it’s OK, but I have ended up with multiplying contacts when the information isn’t EXACTLY the same amongst the different accounts.

I posted about my multiplying contacts in the Apple Discussion forums a couple of years ago, and someone told me that keeping consistency between say, Google and iCloud, is difficult because of slight differences in the way that they implement the vCard standard.

You can keep all of the services active, and link them within either the iOS or macOS Contacts app, but it has to be done one at a time, which I expect is a non-starter if you have 6K contacts. I can tell you that the linking command doesn’t always work either. I’ve linked contacts from Google with their counterparts on iCloud only to have them disconnect shortly afterwards.

I think the way to go might be to have only one Contacts account active on any device (a master list). If you add new contacts, it’s easier to export them to the other services than it is to maintain constant consistency across accounts.

Thank you for sharing your experience with syncing contacts among iOS, macOS, Google, and iCloud.

I was thinking that more backups in the clouds are always better … but at the risk of kludges due to both timing and vCard implementation.

You’ve confirmed my fears. I’ll just keep it as simple as possible: iOS, macOS, and Google.

Or, are you suggesting that it would be more stable to continue to sync only iOS and Google—as I’m doing with few problems—and periodically refresh macOS along the lines of:

By the way, I recovered from one instance of Google sync problems by rolling back to a prior version, which can be up to 30 days; for details see:

How to Recover Deleted Google Contacts

Deleting Google Contacts by mistake can be a nightmare. Luckily you can recover them. Here's how.

Thank you for your input.

This seems like a plausible workaround, although deleting all of the contacts seems pretty heavy-handed. I would make sure that you export all of them before proceeding so you have a workable backup.

Now that I’ve had more time to think about this … maybe I should start a new Topic, but I’ll go ahead and pose my thoughts here for now.

I already have Contacts on Google so I don’t need another “Rolodex” on my iMac. Simply duplicating my Google Contacts on macOS Contacts serves no purpose in itself and introduces synchronization hazards. My question should not have been about synchronization plumbing but rather the (potential) benefits of having complete contact information locally on my iMac.

My question should have been: How is the information in macOS Contacts integrated into other applications/services and how are they affected by changes in Contacts?

I can imagine that the following Apple applications refer to information in Contacts:

What happens to such applications when I add/modify/delete entries in Contacts?

I’m most concerned with how Photos integrates with Contacts. (I don’t use Mail, and Reminders’ sharing/assignment seems to really be tied to iCloud, not Contacts per se.)

How does Photos integrate information from Contacts; does it make a copy or a persistent link? Most importantly, if I go forward with periodically purging macOS Contacts and importing data from Google Contacts, what happens to the Photos metadata for images that I’ve associated with people:

UPDATE 2022-01-27
Apparently deleting the Contact Card associated with a Reminder assignment removes the assignment from the Reminder. Yikes!

I already have Contacts on Google so I don’t need another “Rolodex” on my iMac. Simply duplicating my Google Contacts on macOS Contacts serves no purpose in itself and introduces synchronization hazards.

I agree completely. Fortunately, you can use Apple’s Contacts app to present your Google contacts.

Go to System Preferences → Internet Accounts and add your Google account to it (if you haven’t already done so). Then make sure it is configured to sync contacts: 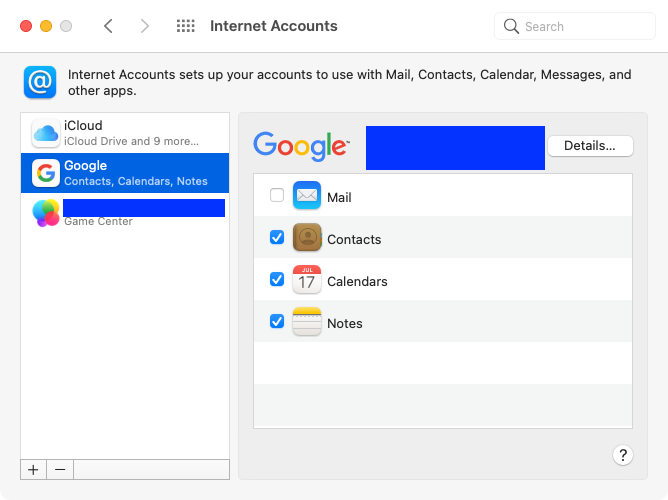 So you can have your Google contacts on your Mac without merging them into local or iCloud contacts.

I don’t know if this is off-topic or not. I recently installed Google Voice on an iPad and chose to get a new phone number rather than porting one. I have made a few calls, some of which appear in the list of made calls as a name and some as a number. For one that was a number, I clicked Contacts in Voice and entered that number and the corresponding name. Not only did the call in the list not change from a number to a name, the contact did not appear in the (still empty) list of contacts.

Overall, it went very smoothly, but …

Unfortunately, the counts of contacts are different:

I bird dogged a few errors in my Google Contacts, deleting two contacts in the process; the counts on both macOS and Google both went down by two, but the delta between them remains unchanged.

Can you suggest any reasons that the counts on Google and macOS are NOT the same?

It’s impossible to say without looking more closely. If you can export both into some common format, then you can compare the lists to see where the differences lie.

I know that Google allows you to create contacts that Apple might consider malformed. For instance, a name without any contact info (e-mail, phone, address, etc.) Or an e-mail address with no name (sometimes auto-created as a result of sending or receiving e-mail. If you’ve got contacts like these, they may have failed to export or import.

But the only way to find out is to actually compare the two lists. If you can export both to a common format (e.g. a CSV file), then you can compare the files, identify the differences and hopefully figure out what happened.

Thank you for your reply and your excellent suggestion to compare two text-based export files.

Apparently, the only “common” format for export files is vCard version 3. (I don’t know any way to export Apple Contacts as a CSV; do you?)

Unfortunately, .vcf files exported from Google appear inconsistent with those of Apple. For example, Google’s contain a URL for images whereas Apple’s have text equivalent of the binary. (“The good thing about standards is that there are so many to choose from.” ― Andrew S. Tanenbaum)

It will take some time for me to noodle a way to compare these two files given the systematic differences.

I know that Google allows you to create contacts that Apple might consider malformed. For instance, a name without any contact info (e-mail, phone, address, etc.) Or an e-mail address with no name (sometimes auto-created as a result of sending or receiving e-mail. If you’ve got contacts like these, they may have failed to export or import.

Yes, Gmail has an option that automatically creates an essentially empty Contact for every email address not already in Contacts. Since I used to have this option turned on, I thought that such records would account for the synchronization count delta.

So, I downloaded a CSV file from Google Contacts and looked for “malformed” Contacts fitting this pattern: ="" AND ≄"" I found such a Contact, but Apple Contacts synchronized it perfectly.

Do you have any other ideas of “malformed” contacts I should look for?

Thank you again for your thoughtful replies.

Regarding the Google CSV export, I should have mentioned that:

Unfortunately, .vcf files exported from Google appear inconsistent with those of Apple. For example, Google’s contain a URL for images whereas Apple’s have text equivalent of the binary. (“The good thing about standards is that there are so many to choose from.” ― Andrew S. Tanenbaum)

@nello That’s the crux of the issue of syncing both Apple and Google contacts. The Contacts app actually does a relatively decent job, but I think it’ll trip up on some of the differences. And then there’s the question of variations in names (e.g. “Robert” vs. “Bob”) or the nomenclature of “home,” “work,” “main,” in various cases that can create discrepancies between the two services.