Some Fancy E-Bikes Have Their Own Apps. We Tried Two

Originally published at: Some Fancy E-Bikes Have Their Own Apps. We Tried Two - TidBITS

Electric bicycles have become popular for their motor-assisted, eco-friendly locomotion, and some even have companion apps. Julio Ojeda-Zapata took a break from his traditional road bike to test two such high-tech e-bikes and found that their iPhone-based connectivity adds considerably to the experience.

These prices are really terrible. ~$£€3K to ~5K is ludicrous if you ask me. We’re getting into cheap car territory.

Sure specialist non-ebikes can go for this money because they offer bike fanatics specific things, but the bells & whistles on these ebikes are IMO largely OTT and unnecessarily just add to the high expense.

Parked on any street in a city near you, and they’ll be stolen very quickly. Thus meaning they’re a complete non-starter for actual real-world utility uses, making them a fun toy that can only be used by very well off buyers (who likely have a car anyway, already) who can securely park off-public areas at absolutely ALL times.

As a warning, you tend to use most ebikes in full electric mode day-to-day, so an advertised “25mile” range, like mine was, will typically only really get you 10-12miles before the battery dies.

In 6 months of having it, so far I’ve been OK in London, (no doubt next week it’ll get nicked, now I’ve said that!

The one thing that limits all ebikes in Europe is the 15.5mph/25kph limitation (in the UK, AFAIR it’s because anything faster has to be road taxed and insured). It makes them not really much good, as going uphill or against wind, and you’re crawling under half the max speed. We need more oomph for those situations, yet simply cannot get it on ebikes here, limiting their worth.

These prices are really terrible. ~$£€3K to ~5K is ludicrous if you ask me. We’re getting into cheap car territory.

Considering that my 3 bikes all cost me over $2k each, I don’t think e-bikes are over priced. My MTB cost me $2600, while the (now apparently discontinued) e-version was about $4500. They seem to be slowly coming down in price, so I’m going to wait a few years, but an e-MTB is almost certainly in my future. I’m not getting younger, and I could have used the extra kick on the steepest part of the climb I did this morning. These are not bikes for commuting, so leaving them unattended is never necessary. I don’t even own a lock at the moment (I did a long time ago when I did commute by bicycle).

I’ll probably never get an e-road bike, though. If I feel I need one, it’s probably time to stop.

Yes I understand the casual rider market, although I’d suggest there are probably more people currently looking at commuter/utility uses at the moment, given the current situation.

The foldable GoCycle ones especially are really not so better than my one in their essence (without the bells & whistles you’ll play with once or twice, then set & forget) to be worthy of circa 8-12 times the price. Even for “fun” uses, $4800(!) is so excessive to be ridiculous IMO.

…on the more positive side, the reviews were decent to be interesting for something very few will likely ever buy.

The last road bike I bought at Erik’s was $7200, and that was 20 years ago. Quality comes at a premium price, and electric bikes allow older (and slower) riders to keep up.

There are cheaper E Bikes. Check out RAD Power Bikes. They have some downsides but they are affordable.

Considering your affiliation, I’m surprised that you did not mention Apple’s contribution to the fray. I bought a step thru E-Bike from Big Cat bikes for $1300. It has a handle bar Meter that shows the usual, speed, battery charge and assist level (1-5).

But more importantly, I have an Apple watch 4 ($646) that has a built in workout app (Cycle) that records your whole trip in detail (distance, heart rate, speed, calories etc., and a map of where you rode) and sends the info to my iPhone that allows me to compare my ride to all other rides. A whole lot cheaper then the above mentioned Apps.

Nothing wrong with the Apple Watch’s Workout app, but there’s a big difference between recording what you’ve done and controlling an electric motor to provide different riding capabilities and experiences.

These e-bikes are pretty expensive, but if it’s something that eliminates the need to own a car or significantly increases mobility in an urban area where a car isn’t feasible, I could see someone being happy to pay the premium. And as you saw in the article, Julio is really clear about how there are less-expensive approaches, even within the same product lines.

And I can’t criticize since I ride a long-stride ElliptiGO 8C, which I bought 7 years ago for $2700 and have ridden for 3800 miles despite being mostly a runner. ElliptiGO just announced an electric conversion kit that would be another $1300. Personally, I only ride for exercise and fun, not transportation, so I’m not really interested in a motor to make it easier. But perhaps that’s wrongheaded thinking, and if riding were easier (Ithaca is really hilly), maybe I would trade some car trips for rides. But then again, our main car is an electric Nissan Leaf, so I’m already electric in the car, and it’s powered from our solar array, so we’re not hitting the grid regardless. So many calculations to make! 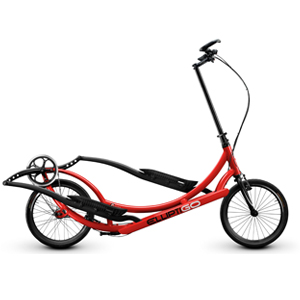 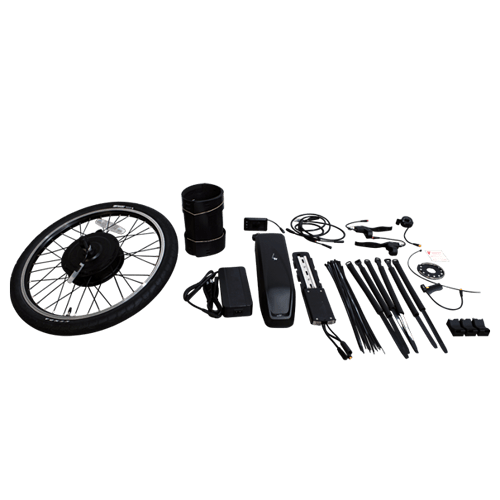 The conversion kit comes complete with a 500-watt motor already assembled into a wheel, a 48-Volt, 14 Amp battery, a pedal assist sensor, a controller, dual power cutoff brake levers, a throttle, a display and a battery charger, plus all of the...

I could never ride more than a few minutes on flat ground on anything that didn’t have drop bars, but I suppose there must be drop-bar e-bikes out there somewhere. Meanwhile, and for that kind of money, I’d seriously consider retrofitting an old Lambretta with an electric kit:

I could never ride more than a few minutes on flat ground on anything that didn’t have drop bars, but I suppose there must be drop-bar e-bikes out there somewhere. Meanwhile, and for that kind of money, I’d seriously consider retrofitting an old Lambretta with an electric kit:

There are lots of drop bar road e-bikes. Pretty much every road bike will have a e-bike counterpart these days. In many cases it’s hard to tell the difference at first glance. The battery is usually hidden in the downtube, and the motor connects to the bottom bracket somehow to provide the assist. Here’s a link to the similar model to my current (non-e) road bike. There’s also an e-version of my current gravel bike (Cannondale Topstone), and many varieties of e-mountain and e-urban bikes.

Nothing wrong with the Apple Watch’s Workout app, but there’s a big difference between recording what you’ve done and controlling an electric motor to provide different riding capabilities and experiences.

Among other things an Apple Watch (5LTE on my wrist at the moment) can’t do: they can’t connect with any ANT+ sensors, can’t connect to power meters even with Bluetooth (I’m not sure if individual apps like Strava can, but Apple’s native app can’t), you can’t navigate and record a ride at the same time, can’t use Varia radar units or set up an ANT+ light network, can’t control indoor cycling trainers. The best device to use for cycling is not a phone or a watch, but a purpose built cycling head unit. I use a Garmin Edge 830, but there are other companies that offer head units that work well depending on what capabilities you need. (I want good onboard navigation, which pretty much limits me to Garmin or Hammerhead units.)

I had no idea there were so many e-bikes—Electrek has a great collection of reviews.

Apparently there are even e-bikes aimed at hunters. I have to admit, I’m starting to see the appeal of these sorts of things in different situations. I grew up on a farm, and having an e-bike to get to and from far-flung fields or to our barn, which was a mile away, would have been really helpful at times, especially with the capability to carry some gear. And while they’re pricey, it’s less troubling when you’re comparing against an ATV or UTV or tractor. 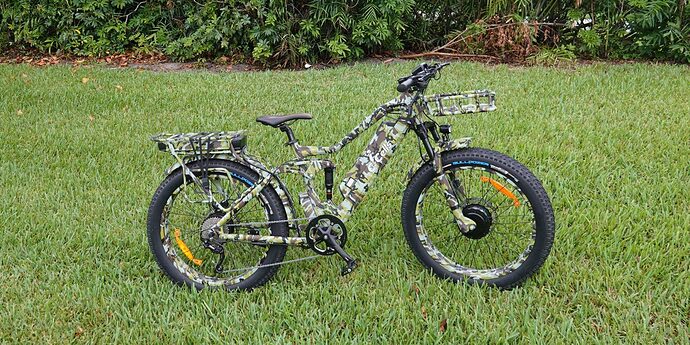 Being able to ride an e-bike on an assortment of trails is one thing. But being able to continue with overland riding once the trail has ended takes an entirely different type of e-bike. When you’re cutting your path through fields, forests and...

And it looks like there are models available for around $1000 too, which is much more reasonable for most people.