Any time I bring it in they wipe the screen off and this time was no exception, I commented on it when I picked it up (no more fingerprints).

Once I got it home in different lighting though, I could see swipes across the screen where they’d used something wet and didn’t get it all off. I used the black cloth that came with the box and could only clean the center of the screen, so yesterday I brought it back.

They reached for a packet, wiped the screen down again (wet), dried it with a cloth that didn’t look very clean and declared it was delaminated. I was in complete shock and at this point the entire screen is affected. It looks worse than when we started minutes earlier.

Ok I say, show me the pix they took when I brought it in Monday. They bring them up (one screen photo) and say they can see delamination beyond the fingerprints. I cannot. I asked them to send me the photos, they said they would, they sent me the work order without the pix.

The work order does not say there are any defects on the laptop at all.

My biggest question is - if a screen starts delaminating due to age, how quickly does it happen? I believe I brought them a flawless screen and three days later this is what it looks like. I use this all day every day, in all types of lighting and am sure I would have noticed this earlier, especially along the bottom edge where I never have fingerprints. I have NEVER used anything wet to wipe it down, but now they do to covid-disinfect.

(I do have a few pix of the lower edge that I snapped for speedtest numbers on Tuesday night, but I am not sure how good they are for this purpose - I can’t see any issued with them though) 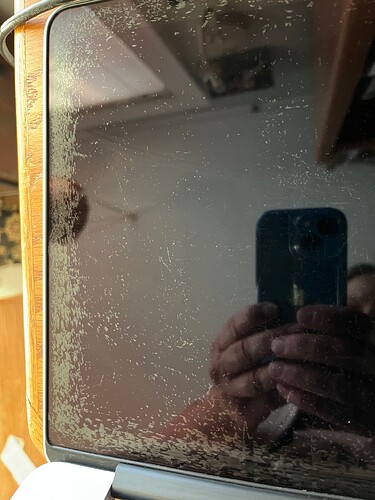 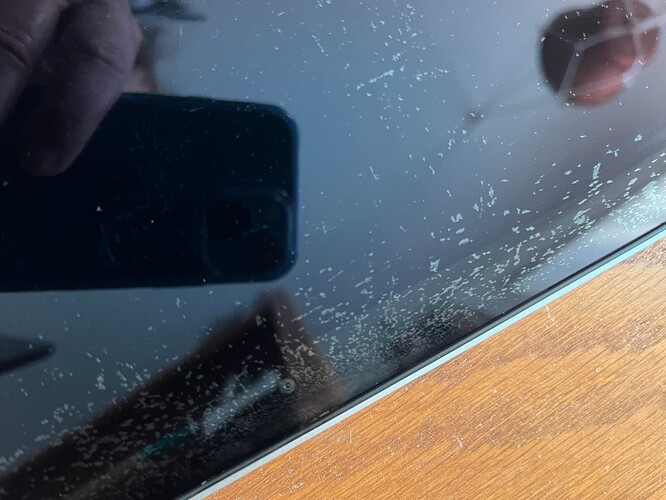 Sorry to hear you were affected by this. I had my 2013 13" MBP’s screen replaced twice for the same problem. But both times Apple paid for it, I was simply out my 13" for 3 days. Do they no longer offer that screen replacement program? Perhaps not for a 6-year old machine. I’d ask them about it and hope you’ll find somebody sympathetic to your issue. You might want to point out you did have AC on the device back in the day. (if that’s the case of course).

I did a quick search, but didn’t find anything particularly juicy. I remember this article from back in the day. 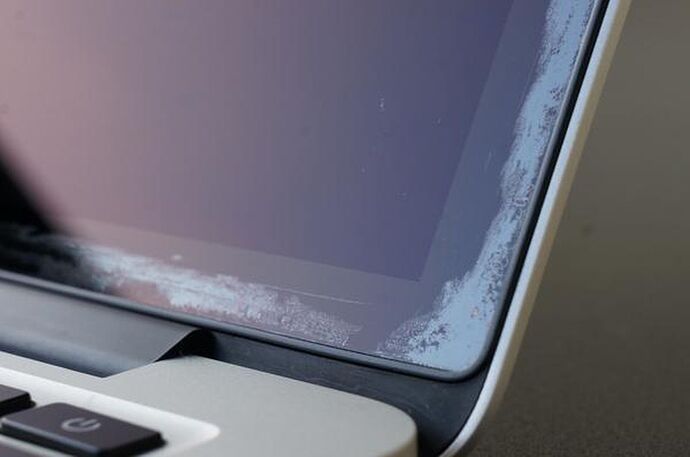 If you purchased a 12-inch MacBook or MacBook Pro with Retina display and have experienced issues with the anti-reflective coating wearing off or...

I did have AppleCare but it’s expired. I kind of knew there were issues like this, but I never had any with this screen until this week - after I got it back from service.

I did look up the replacement program and that has ended as well.

I’m just wondering if the rapid (i.e. 3 day) deterioration can help prove my case that this was caused by them using whatever wet method they are now using in the store. Because I know it was washed twice that way, once when they did the repair and once in front of me last night. And there’s no way I wouldn’t have seen the issues with it, had it been delaminating prior to me bringing it in on Monday.

The “admin” that checked it in on Monday went over it and took photos with me present. No defects are noted on the work order, and I’d call a delaminated screen a huge defect.

Can you confirm it’s the same machine and they didn’t just swap it for another? Like serial number or distinctive marks, backup,status or something? Often that’s easier for them than actually replacing the battery.

That’s an interesting theory. They replaced the case though, I think it’s the upper case with the battery, so a new keyboard too. I backed it up but everything booted ok. Would the trackpad be new with this repair?

Where is the serial number embedded in the machine?

But now that I’m really looking, I can see worn marks on the space bar, both sides and I only hit the space bar on the right. Also more wear on the trackpad than I’d expect with a new (I think) one. The trackpad looks like it has a film over it except for the upper center, it’s like a big U is more dirty than the center.

However it’s possible I put on hand cream at some point this week.

I’m in a dim room right now and it’s pretty grey out, so I’ll check it out more closely in better lighting. There is a tiny chip on the outer edge that I am pretty sure was there before. Would be nice if they’d sent the pix like I asked. I guess me saying “I’m going to be beyond upset if I have to come back up here and ask for them again” didn’t mean anything.

My biggest question is - if a screen starts delaminating due to age, how quickly does it happen?

In my case, with a MBP 15-in 2017, delamination only showed up when, in preparation for sending the computer in to replace the battery and keyboard under AppleCare, I used iKlear, as I have for decades, to clean what I thought was a smudged area near the top of the screen. The more I cleaned, the larger the area became until I realized the top layer of the screen was coming off.

The screen was replaced along with the battery and keyboard, no questions asked. (I think it was a known issue with that model.)