Major new release for the Mac backup and recovery software with improved speed and dashboard displays. ($49 for Solo and $119 for Desktop new, upgrade pricing available, 195 MB)

What does Retrospect mean when they specify a “non-server computer”?

I’m not sure it has that much meaning in the Mac world, now that I look. 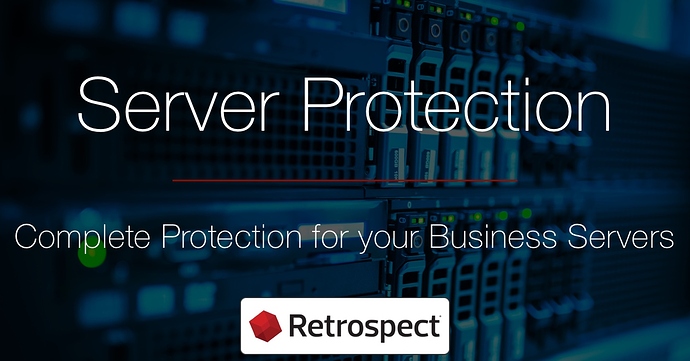 Your business server is the engine of your business, and any disruption to it costs you time. Server backup with Retrospect Backup enables you to protect your server for fast recovery.

Back when I was still using Retrospect, they meant any Mac running Mac OS X Server. When Server became an app store app, they checked for its presence.

Which is why I stopped using Retrospect. They decided that the presence of a $20 app was sufficient to force me into a massively overpriced installation, even though I was only going to be backing up one computer.

It wouldn’t surprise me if they’re still playing stupid games like this.

Which is why I stopped using Retrospect. They decided that the presence of a $20 app was sufficient to force me into a massively overpriced installation, even though I was only going to be backing up one computer.

Was that when they were part of Dell EMC?

I used Diskfit but never had the need for Retospect when it came out from Dantz.

I’m pretty sure it was as a part of EMC. I bought my first license in order to back up to a FireWire tape drive from a PowerMac running non-server editions of Mac OS X (10.2 through 10.5). When my data got too big for two 33 GB VXA tapes, I switched to using hard drives for my backups, but kept on using Retrospect.

When replaced that Mac with a mini (running 10.7), I decided to purchase Server because it was cheap and easier than manually hacking/enabling the various server features I use (web, FTP, remote login, screen sharing, DNS, DHCP), I found that Retrospect would refuse to run. It saw the presence of Server.app and told me I needed a license for the server edition - which cost over $500, compared with the Desktop edition which was under $150.

At that point, I started making my backups with Carbon Copy Cloner and haven’t looked back. CCC is no good for things like making archival backups onto optical media, because it’s a disk-clone utility, not a backup utility, but it’s good enough for what I need most often.

I always liked Retrospect, but their brain-dead licensing policies have permanently changed my opinion regarding doing business with them. Still, I might consider using them when I get my next Mac, since Apple has stripped so many features out of Server.app that there’s no longer any reason to use it with current macOS releases. Without Server, I expect I will be able to use Retrospect Desktop even if I manually install Apache and turn on file sharing.