Replacing the battery on a 2012 MacBook Pro

What’s the best way to address a warning to service the battery on this unit (Macbook Pro 2012 pre-Retina)? What’s the best supplier for a replacement? Can I install a new one myself? Or is there another remedy?

I have the same machine (I assume 13"?), and also the earlier Mid 2009 model, which I think is very similar. I replaced the battery in that earlier machine in June, so have considered some of the details of this fairly recently.

Our machine had been showing “Service Battery” since 2016. It didn’t last long on battery power, and the percentage remaining figure was inaccurate (it would sometimes power off at about 30% remaining I think). But these problems didn’t matter much: we mostly used it on mains power.

I chose to actually do something about it in June 2020, though, because I noticed that the battery had swollen up slightly: the machine wasn’t sitting quite straight on the table, and trackpad clicks were intermittently not registering.

I bought this kit: https://eshop.macsales.com/item/NewerTech/BAP13MBU65V/ from https://www.thebookyard.com in the UK. NewerTech / OWC and TheBookYard are long standing reputable companies IMHO. It was quite straight forward to install. Two screwdrivers were required, one with an unusual tri-lobe head, but they were both provided in the kit. Seems that particular product is no longer for sale, but they list an alternative. There are videos at that page that show what is involved. iFixit is also a good source for repair instructions: see the iFixit battery replacement instructions for your machine. On this type of machine, it’s one of the simplest repairs.

That kit was about £100. There were many other options on eBay and Amazon which were much, much cheaper: around £30. But none seemed to be from a reputable make. One battery I saw was printed “Designed by Abyone in California” (!). Amazon and eBay seem to take no responsibility at all here. There are many scary stories about lithium-ion batteries catching fire if you have a look on the web. Some of the better sources I found, if you like detail:

I wanted to get the swollen battery out of the house as soon as possible after replacing it. I packed the swollen battery into the new box, and put that inside a metal box. I took it to our local tip, after phoning to check they would accept it (they were ok, but asked how much had it grown - I answered about 1mm).

So - I did pay a much higher cost for a more reputable product, but I’m happy about that given the risks here. £100 is a lot of money to spend on a 10 year old machine, but it was worth it here, because the machine is still in very active use in my family.

I hope this helps. If you do have any signs of a swollen battery like I did, I do urge you to do something about it as soon as possible - see Glenn’s article. But if it seems physically ok, and you are happy about the run time, I think the “Service Battery” warning on its own doesn’t matter too much.

What’s the best way to address a warning to service the battery on this unit (Macbook Pro 2012 pre-Retina)? What’s the best supplier for a replacement? Can I install a new one myself? Or is there another remedy?

If you are seeing this warning, then you should replace the battery. Installation is very easy. You need two small screwdrivers (Plhillips #00 and Tri-point Y0). Here are the iFixit guides for the 13" and 15" models: 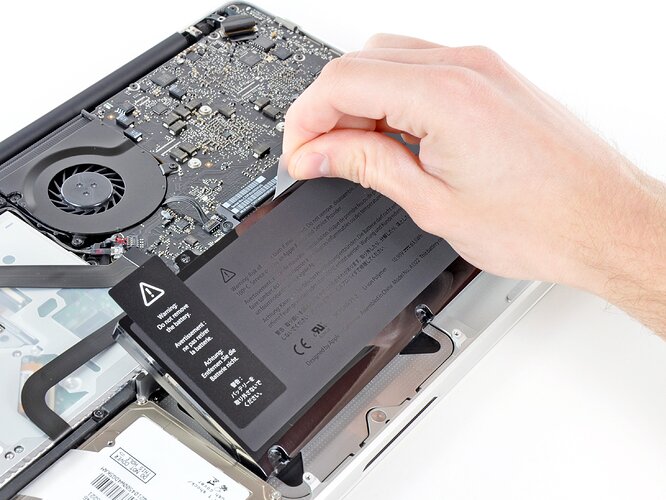 Replace the battery in your MacBook Pro 13" Unibody Mid 2012. iFixit has the parts, tools, and guides; everything you need to get the job done. 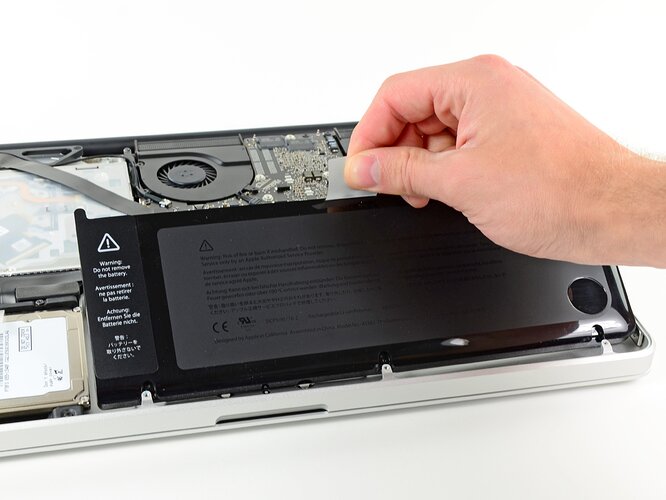 Replace the battery in your MacBook Pro 15" Unibody Mid 2012.

Another source is OWC, charging $89.75 for both sizes. If you also need tools, they also sell them.

You may be able to get better prices from Amazon, eBay and other such sites, but if you shop there, be careful to be sure you get what you think you’re getting. You don’t want to get a poorly-made battery that might not work properly or might even become a fire hazard.

I trust batteries sold by OWC and iFixit, but I would not extend that trust to other companies without thoroughly researching them first.

OWC recommends this alternative to the battery that’s no longer available: https://eshop.macsales.com/item/NewerTech/BAP13MBU74V/. It’s 74 vs. 65 watt-hours. What’s the significance of that?

Thanks to David C. for the link to the iFixit instructions.

My original battery (looks like David C and I posted at similar times - scroll up to see my post) was marked 63.5Wh. The replacement was 74Wh. This is the total amount of energy that the battery can hold. Higher numbers give a longer run time. I don’t know why the numbers vary. My guess is that the higher capacity designs use cells that are more densely packed inside.

No problem with more watt-hours. That just means it can hold more charge. In general, you should get the highest capacity that will physically fit in the computer. Of course, you rarely have an actual choice.

As for why the aftermarket batteries have more capacity than the Apple battery is probably because the tech has improved since Apple designed their batteries 8 years ago.