My husband and I are concerned about the longevity of our ancient removable drives, and would appreciate and recommendations about 2TB hard drives. Any suggestions would be most appreciated.

Depends on what you want to use them for and which Mac model you have.

Are you looking to replace an internal HDD or put the SSD in an external enclosure (say for backup storage).

The primary use for the SSDs will be external Time Machine backups and archives, and also to store photos. My husband has a late 2020 M1 MacBookPro. My MacBook Pro is so old I don’t remember exactly when I bought it, but it’s probably around 10-15 years old. I will replace it when the newer MBP models come out in the fall. Any suggestions about SSDs will be most appreciated.

This night be a TL;DR so I apologize in advance.

I’ve long been a fan of build your own external drive enclosures that allow you to select your own drive, interface, and performance at the price point you want. They also allow you to replace the drive if the drives break or you want a bigger one.

But if you don’t feel comfortable with DIY enclosures, some of the below discussion is valid too.

A DIY enclosure will also dictate which kind of SSD can be used. There are enclosures that will accept both SATA HDDs and SSDs or those that use M.2 SSDs only.

If you go down the DIY path, you probably can’t go wrong drives from major SSD manufacturers such as WD, Samsung, Crucial, etc. I know that OWC, WD, and Samsung have external SSD in enclosures as well.

If your goal is long term storage or backups then you don’t have to pay top dollar for the highest performance storage or highest number of writes.

I would personally have separate drives for Time Machine and long term retention, as Time Machine is not a long term archival utility. It will drop old backups if the disk fills up and that’s the last thing you want to have happen for data you want to know you are keeping. It also allows you to take archival data off site for more secure storage.

But don’t rule out HDDs for Time Machine backups. You won’t stress the performance of a drive for backups (especially since Time Machine does incremental backups after the first one). And given how macOS has changed in the last few releases many pundits are rethinking the need for a ‘bootable clone backup’ that would require the performance of SSD backup media in the majority of cases - especially where M1 Macs are involved. SSDs still cost more than HDDs per GB especially at the higher capacities and conversely you can get more backup storage for the same cost with HDDs.

I’ve talked about this on various occasions here. At the risk of repeating myself, here are some things to consider:

And just in case you’re curious, here’s what I’m using for my external drives (two for clone-backups of my system and one for Time Machine):

Many thanks to Technogeezer and David C. for the valuable information, but building a drive would be to big a stretch for us. We’re just looking for a recommendation for an external SSD drive like the ones from Seagate and LaCie – any brand or model that folks have been happy with. We very much appreciate the feedback!

Speed is actually very important for us. We have more than one backup drive each, like what Technogeezer mentioned. And we each have a lot large files including graphics, etc.

Speed is important depending on the task whether it be a Time Machine backup, a CCC backup or saving large files. SSD’s, even if using the off the shelf USB ones are way faster than any mechanical drive.

I also can’t recommend the WD My Passport as those drives are unable to be read if taken out or their original cases if the board goes bad (unless something has changed). Instead, the WD EasyStore models are better and a bit cheaper.

Speed is actually very important for us. We have more than one backup drive each, like what Technogeezer mentioned. And we each have a lot large files including graphics, etc.

I have used external Toshiba SSD’s which don’t seem to be available now so based on recommendations here in earlier threads, I use Samsung T5 1TB models. There is also a newer T7 which is a bit faster if you have the UBS-C connections which my 2012 Mac does not have. They have been on sale for around $109 at Best Buy and others but you would have to check on the 2 TB which are about double the cost. As an alternative, you could get a 5TB WD EasyStore HDD at Best Buy for around $109 for more storage but slower than SSD. I also use the EasyStore for backups and just purchased another. They’re not as fast as the larger WD models with 7200rpm drives but I only have so much room on the desk and these small drives just plug and play without any external power supplies.

Well, I would just say buy one of the Samsung external SSDs (USB drives are fine - Thunderbolt are faster and much more expensive) and get on with your life. I am using SSDs exclusively for my CCC backups and for my photo libraries - and I appreciate the speed. (My CCC backup updates take less than 2 minutes to run.)

I’m partial to Samsung SSD’s… and recommend them to clients as internal and externals. Internal i’d go for a Samsung EVO series and external the Samsung T5 SSD. The T5 comes with old and new USB connectors (USB A and USB C).

Discover the latest features and innovations available in the 870 EVO SATA 2.5 inches SSD 2TB. Find the perfect Memory & Storage for you! 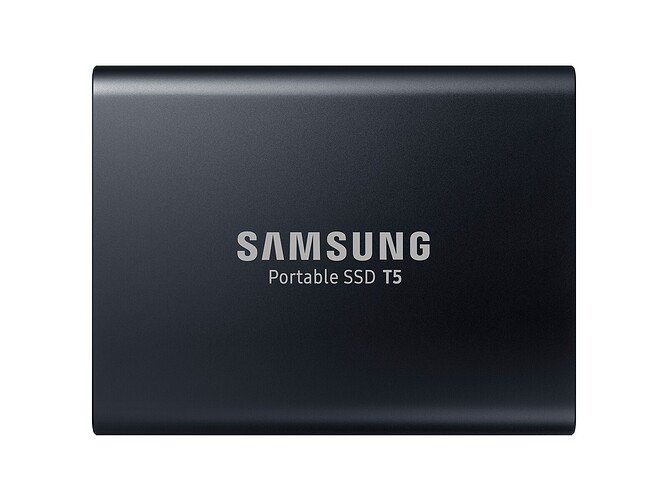 Discover the latest features and innovations available in the Portable SSD T5 2TB. Find the perfect Memory & Storage for you!

I’ve been using the Samsung T5 SSDs David mentions above since 2017 for:

I regularly rotate backups between on and off-site. Their small size (a fat credit card) makes it easy to slip them in a pocket.

T7 is the current model but I’m quite happy with the T5 which you might be able to pick up at run-out pricing.

I’ve been using the Samsung T5 SSDs David mentions above since 2017 for:

Is the T5 you use for Time Machine connected 24/7?

We only connect the drives when we are backing up. And I’m leaning to Samsungs. Toshiba was a horrible client for me and so was their ad agency when I worked in ad sales. Samsung was great.

I turn my computers right off when not using them and disconnect the T5s so:

I’ve been booting from an external T5 which therefore must be connected 24/7. I’ve had no overheating or other issues.

I still can’t agree with you on this, whether you have your Time Machine drive attached all the time or only for backups. Time Machine is purposely designed to operate in the background at a low level of priority with regard to application operations. I seriously doubt that the time it takes to perform a single backup would be seriously be reduced by the use of an expensive SSD. Save them for higher data throughput requirements.

Also agree with @jk2gs that WD Passport is is likely a poor choice here.

On an older machine, I turn off automatic backups on Time Machine and use “TimeMachineEditor” to run it just a few times each day on a schedule less instrusive to work.

Toshiba was a horrible client for me and so was their ad agency when I worked in ad sales. Samsung was great.

Toshiba makes some of the most reliable hard drives and SSD’s as well. But Samsung seems to own the SSD market at this time. I have many Toshiba external hard drives and two external SSD’s and all work well with no issues as do my WD drives. So I don’t think your experience with a company in another arena is relevant to technical issues and/or reliability. Buy the model that suits your needs.