I have Bose Companion 20 computer speakers. They have a nice sound although initially I thought there was a hole in the middle of the sound-stage but I’m used to it now. They connect to the headphone jack, and have a little “puck” on my desk that you tap for power, and it’s got a rotary volume ring around the topside. It also has a headphone and a microphone jack. My original computer speakers were the Harmon-Kardon Soundsticks, which were great, but sometimes got nasty and brittle sounding with piano.

Thanks so much for all the recommendations, folks! They give me some really good starting points for my research.

Ah, I see, thanks, Michael. This sounds like what the HomePod Mini that lived with me briefly did automagically–analyzing the output, deciding what it should sound like, and fiddling with it accordingly. I didn’t use the HomePod for music, and found that the EQ it applied to male voices so annoying I returned it.

Equalization of a room, on the other hand, analyzes of the frequency response at the listening position using an especially calibrated microphone (like the one included with receivers with Audyssey software) that adjusts the speaker output to produce an acoustically flat signal there. The original HomePod “listened” to the room and did something like this, although what exactly it did remains a mystery as far as I know.

I suspect the fad for customized EQs (which the iTunes Equalizer function started providing years ago) is an attempt to overcome the limitations of earbuds and small computer speakers. How much and how well they’re able to do that I can’t say, since I don’t listen to music that way. In the end, and however you listen to recorded music, it really is all a matter of taste, although arguably anything other than a flat response isn’t what the engineer intended you to hear.

I’ve got the new AudioEngine HD3s (replacing my old A2s) which I love. Still small and compact, but deliver fantastic sound. I’ve wired them via USB, but they can also handle Bluetooth (with a slight latency apparently). It has a front mounted volume control, better DAC than the A2s, and you can hook them up easily to a subwoofer if you want. I didn’t want anything bigger in size, and with this constraint they are optimal.

Hi Adam, I have been using M-Audio for years. My current config are these.

i have a focal xs 2.1 system. if they still made it, i’d recommend it highly. wonderful sounding system. totally amazing audio for $500.

when they cack, i’m thinking about replacing them with the kef ls50 wireless2 speakers. an expensive replacement.

I have a pair of AudioEngine A5s that I am very happy with. They replaced a pair of M-Audio speakers that died shortly after they went out of warrenty and that M-Audio didn’t care about. They are the best powered speakers I’ve had. Just for reference my main speakers are Harbeth SHL 5s which are very good speakers.

I got a pair of these, for use by my old MacPro, and iPhone. Not cheap. But they sound amazing and I will be using them for years I reckon:
https://www.ruarkaudio.com/products/mr1-bluetooth-speaker-system

Using a pair of Yamaha HS5i’s connected through a Behringer UMC202HD audio interface. Those speakers are powered and self amplified and actually have two amps each: a twitter amp and a woofer amp. They are mounted on the wall behind and above the screens, so the stereo sound comes from somewhat above the center of the desk.
The audio interface also (phantom) powers a pair of condenser mics, a shotgun (RODE NTG4) and a cardioid (Mackie EM-91C) - for the different purposes and levels of external noise. It is connected to and powered from my MBP via a USB-C port.
This is certainly an overkill for video conference purposes but those studio grade speakers and mics serve a purpose for my music hobby and also give a great listening experience when streaming music. Being “stuck” at home for the past 18 months I decided to spoil myself with this set and have no regrets. 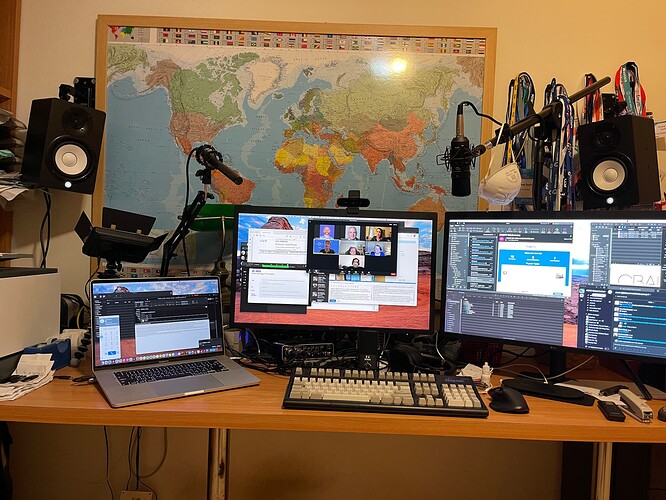 Something I was told by quite a few people on the audio side, including people who worked for companies that primarily made humongous speakers, is that size doesn’t really matter, unless you are in a theater sized room.

Speaker size affects the low frequencies (bass) primarily, and those are affected by room size, ceiling (if any), resonance. So in a small room - a pair of 4-5" speakers will provide great sound including lows. Bigger rooms will require bigger speakers, or a dedicated sub-woofer that handles the lows effectively and lets the regular (and smallish) speaker handle the rest. Those sub-woofers are primarily needed in conference halls with “noise absorbing” ceilings that absorb the lows more than the highs. They are also needed in open spaces under the sky as there is no room and walls for the sound to bounce off of, and the lows dissipate at much shorter distances than the highs.
When my musical ensemble performs in a hall with those “noise absorbing” ceilings, the male voices sound faded. Those ceilings are useful when the room is full with people all talking at the same time. It’s disastrous when a choir is trying to perform, or any other acoustic ensemble for that matter.

So in a small room - a pair of 4-5" speakers will provide great sound including lows.

I agree with your recommendation in Adam’s case, but to nitpick slightly: great sound, absolutely, lows, yes, probably enough of them depending on your definition of “low.” E.g. my Genelec 8020 4"ers roll off at 62Hz. This is enough to sound low but not enough to provide any of the fundamentals we hear at a live performance, which extend down to 20Hz (or lower, if you include the frequencies we can feel). To get down there you need multiple drivers or a single driver in the 12"-15" range and it’s those frequencies, and not the higher ones, that are influenced by the dimensions and speaker position in any room, not just small ones–years ago Roy Allison designed a whole line of wide-range speakers that took advantage of this fact. Setup of a full-range system with an acoustically flat response at the listening position is quite tricky and almost impossible to accomplish “by ear” in any space and especially at a computer station, and that, if nothing else, is why you should limit yourself to smaller speakers and, probably, stay away from the ones with “subwoofers.”

I recently purchased a “cheap” 5.1 Vizio sound bar from Costco for this. It’s not nearly as good as the 5.1 “gaming” speakers of years gone by, but it is HDMI, 5.1, and has a reasonable subwoofer. It still feels & sounds cheap compared to other things I’ve used. And the frequency response curve leaves quite a bit to be desired. Ok for watching tv, but not so good for mixing/master music or video editing.

I bought a set of Bose Companion 5s. They’re a $400 set but they blew my mind in the store (and that was a Bose store, and I had listened to number of other models there already) and they sound better than even my main speakers in the house.

So much so that I bought another set for use in my piano room, not connected to any computer. They’re just the output of my airplay setup I discussed in that article.

Can’t imagine they could be improved on! 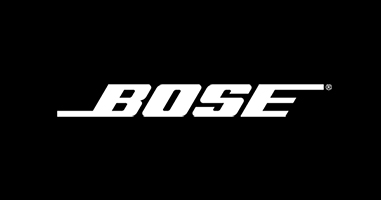 Dave, what are the frequency response specs? I can’t find them on the Bose website. Something like this would be useful.

Here’s what Genelec posts for their 8010s.

[edit] +/-3dB is considered “flat” by industry convention, probably because 3dB is the smallest amount of level change most of us can perceive as “louder” or “softer.”

Strangely, the manual doesn’t appear to have any audio specs!

Wirecutter did measure a couple of their models, though not the one you have. See the link I provided earlier.

Sorry Adam I was tempted to ask how often you had to fill the boiler.

If you can’t afford the unfortunate high prices of US manufactured (or any place not China) equipment, I have and recommend Neumi BS5 speakers and the Aiyima A07 mini amp. I have my iMac’s headphone port connected to the mini-amp, so I purchased the surprisingly good jsaux usb audio adapter for my headphones. I am really happy with these purchases. I’ve bought powered (China made) computer speaker systems before that quit working after barely using them and now I think buying powered speakers is a big mistake. Isolate the part that can fail (the amp). But I don’t expect the A07 to fail. I would also suggest considering avoiding bluetooth altogether if you do not know that you need it. While bluetooth is a great technology (though inferior to wired) it can easily get in the way, big-time, when you don’t want to use it.

I also had a set of FX6021, but had passed them down to my son. He had been using them but found out recently that they no longer work, we think because of a faulty power supply to that sub.

I now use a pair of HomePods with an M1 Mac mini setup, and they’re only used for Music. Everything else just uses the tinny onboard speaker.

If you’re looking for alternatives to the 6021 I did go with a Scandyna set (Podspeakers) that sound really good, but my current desktop is too small. Though they do have smaller sized speakers that you can pair with the sub. Not sure what your budget is, and how important aesthetics are. But they’re well made and sound great.

Good luck on your quest.