So many years ago I bought this Anker device to both charge my iPhone&iPad on the go and to also act as a backup battery for either. It charges its built-in battery through the wall plug, but it can also charge through USB if only that’s available (Y seats sometimes offer USB, but not AC so that can come in handy). It’s a nice device and has worked well, but it doesn’t have USB-C and so I’m looking for a new charger/battery. In principle I could plug an A-C adapter into this thing and continue to use it, but since I’d also like to get more battery capacity (and possibly smaller/lighter with GaN), I figured I’d best just replace it with a newer model. Problem is, there doesn’t appear to be a whole lot to choose from.

It should be GaN and have at least 2x USB-C (at least one should offer 30W) and ≥10 Ah. It doesn’t have to offer USB-A at all. It should charge through an AC wall plug (that folds in), but nice would be if it could also be charged through one of its USB-C ports. It should have an external charge indication. And it shouldn’t be ridiculously expensive like Anker’s $100 733 charger.

In the meantime I see basically just two. The former is only 5 Ah and lacks USB-A, but perhaps more importantly it isn’t GaN. The latter is the expensive 733: it’s a bit bulky but at 10 Ah offers twice the charge. Actually, they’re both not cheap but at least there’s decent discounts right now bringing them to $53 and $80, respectively. 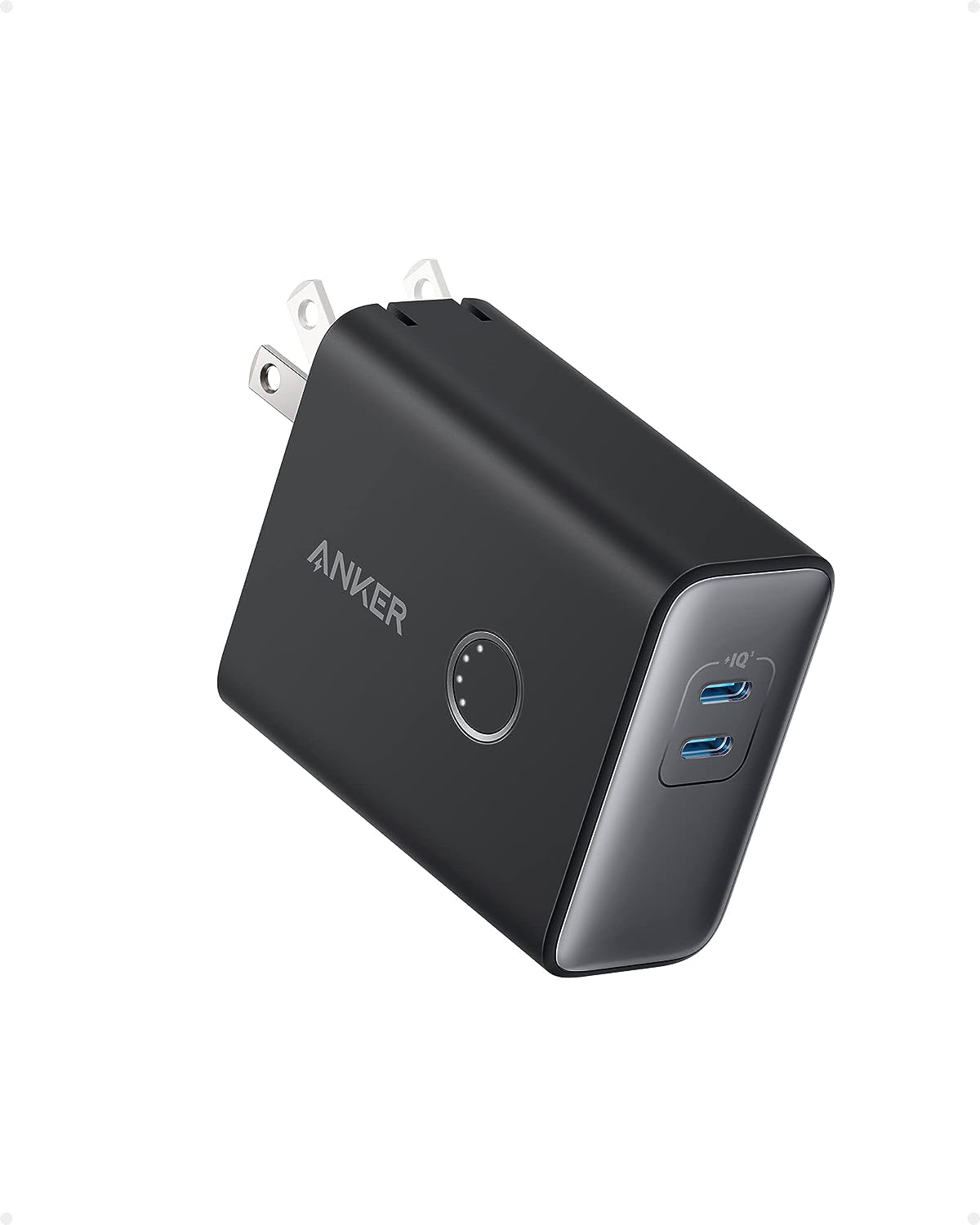 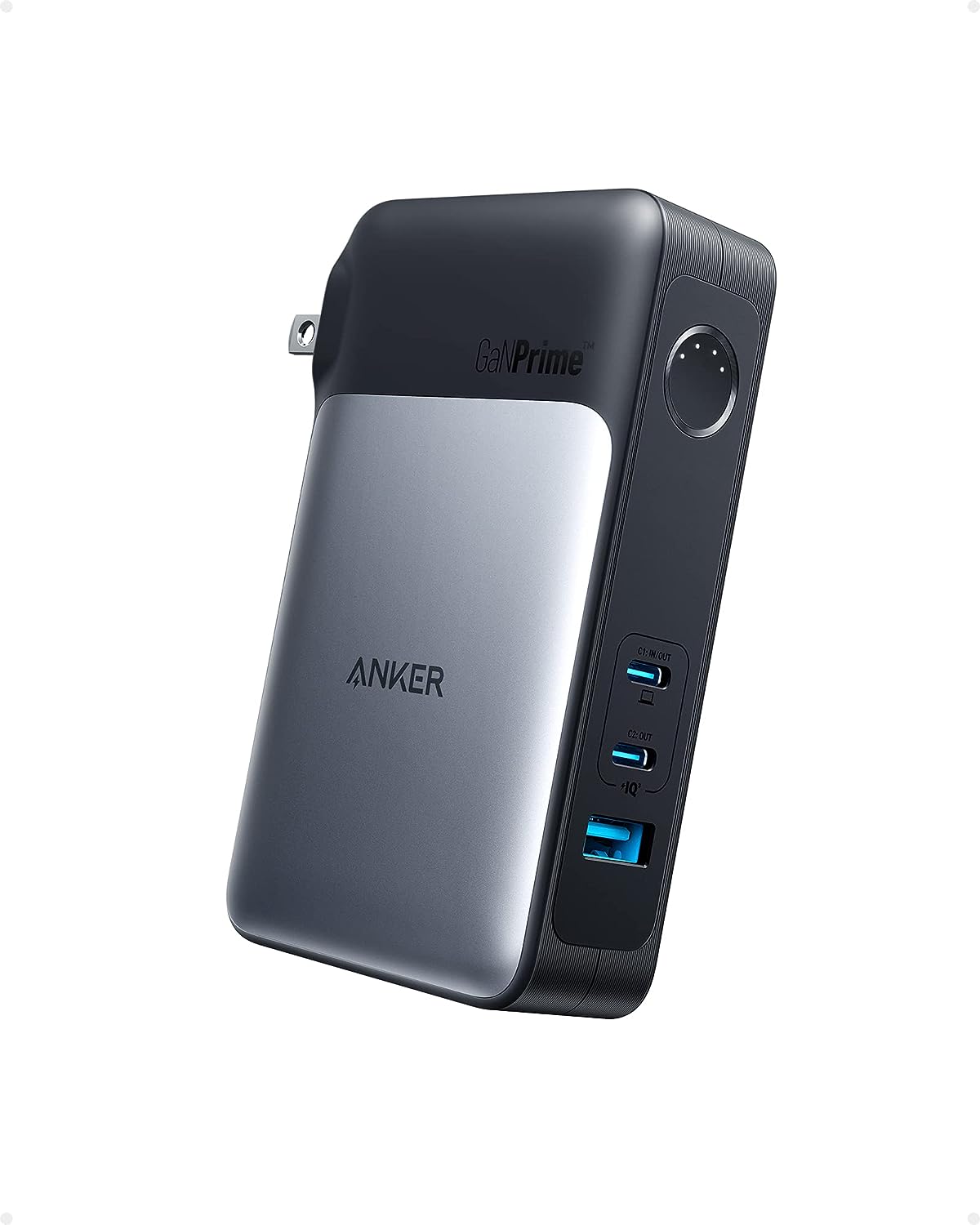 Just occurred to me that these combo chargers and battery packs usually supply their capacity in Ah while Apple’s official hardware specs usually refer to battery capacity in Wh. Either is fine in principal but to judge how many charges your Apple device is roughly going to get from a battery pack, you need to know the battery voltage and that’s not commonly divulged by Apple.

Anyhow, just to give anybody who’s interested an idea - my 14" M1 Pro MBP has per Apple a 69.6 Wh battery. The battery voltage (according to 3rd party suppliers, not Apple of course) is 11.47 V. So that means the MBP’s battery capacity expressed in Amp-hrs is 6068 mAh. IOW that Anker 733 battery when fully juiced up should charge my MBP more than once, but not twice. Anyhow, just to give anybody who’s interested an idea - my 14" M1 Pro MBP has per Apple a 69.6 Wh battery. The battery voltage (according to 3rd party suppliers, not Apple of course) is 11.47 V.

iFixit is a good source for this information. According to their teardown article for your model MBP, yes, it is 11.47v. It’s even printed on the battery, if you have the screwdrivers needed to remove the cover from the bottom of the laptop.

Just a thought. The charger will last for years. Maybe decades. Most failures I’ve seen are due to cables breaking, not the power unit breaking.

The battery will wear out after a number of cycles.

I prefer to keep them separate.

Sure, that’s a valid concern.

The cable is never attached to these units, just like on any other regular USB-C charger (and unlike how it used to be with Apple’s old MagSafe 1/2 chargers), so that bodes well for future proofing. The only thing firmly attached is the foldable AC plug and like on a quality charger, that’s pretty solid.

The only data point I have is my old Anker PowerCore Fusion 5000 which I’ve been using since 2019. It still holds its charge just fine so it appears to be aging quite alright. Of course I don’t expect it to last as a battery quite as long as a quality stand-alone charger, but it if lasts ~5 years, it will have easily held good enough value (it was just $20).

To give a complete picture, I should probably say that I don’t use this as a regular everyday charger and I wouldn’t recommend that either. My use case is long-distance travel for work a couple times a year. This device is just an extra backup for those times when you find yourself needing juice and unable to connect to AC (like on a 14-hr flight to India for work where you were originally booked C but due to overbooking [and not wanting to be delayed by an entire day] agreed to be downgraded to 54K without remembering that that meant zero AC or USB whatsoever

). And since it can also be plugged straight into wall AC it can serve as my charger at the hotel during the trip. Just so I save brining on one more device.

But I wouldn’t advocate using this in place of a charger for just regular charging (and I would expect that shortens lifetime). It’s really primarily a backup battery for travel and as such IME works really well. You could of course just get a regular battery, but then you also need an extra cable and charger to charge that. This just gets rid of those extras.

Not really. My travel collection of cables will charge most any battery. Micro-USB, Lightning, and/or USB-C.

I’m not saying you’re making the wrong choice. Just that I have decided to deal with batteries differently. And after all the swelling I’ve seen treat them as somewhat of a fire hazard.

Prior to March of 2020, between the two of us, my wife and I flew 50+ times per year. I tend to look at Lithium-Ion batteries a bit differently than most. Plus, in my consulting I’d see 1 or 2 swelling laptops per year. And people treat their laptops “nicer” than a battery/charger.

And disposal issues on top of that.